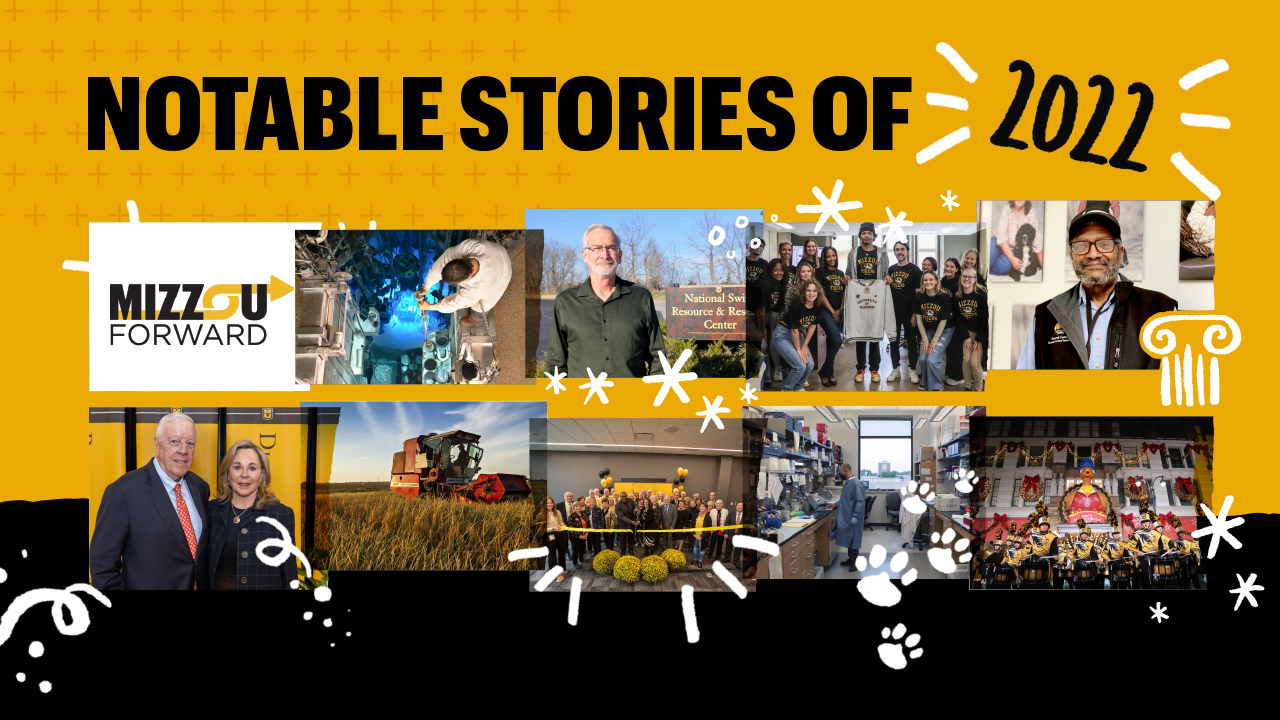 1. Mizzou’s investment in the future is paying off through MizzouForward and the Roy Blunt NextGen Precision Health building

In March 2022, University of Missouri President Mun Choi announced the boldest plan in the university’s history — MizzouForward — and the results are already evident. The 10-year, $1.5 billion plan, which focuses on faculty excellence, student success and investments in critical infrastructure, has already attracted world-class researchers to MU and sparked research productivity across campus. Additionally, the plan includes nearly $4 million in awards to fund 51 projects that support student success. This year also marked the one-year anniversary of NextGen, where today 36 researchers and their teams are conducting critically important research to improve the health of Missourians and beyond. So far, those researchers have been awarded $97 million in grants.

2. Researchers continue to impact the world with innovations and discoveries

MU researchers have been busy this year taking on challenges that push the boundaries of discovery and scholarly pursuit. MU scientists came to the rescue when an unexpected reactor shutdown in Europe prompted the MU Research Reactor (MURR) — the most powerful university research reactor in the United States — to increase its production of critical medical radioisotopes to alleviate the anticipated disruption to the global supply chain. MU researchers also used a radioisotope created at MURR to examine the impact of smoke on plant growth after a wildfire, making a surprising discovery that could one day lead to new farming practices. MU scientists collaborated with researchers from Harvard and Georgia Tech to develop a novel diabetes treatment involving transplanting pancreas cells that produce insulin. On a different front, MU researchers found social exclusion is a more common form of bullying than physical or verbal aggression while another MU study discovered people of similar desirability are most likely to pair up and have a long-lasting and successful relationships.

This year, Blake Meyers, a professor of plant science and technology in the MU College of Agriculture, Food and Natural Resources, became the 12th MU faculty member elected to the National Academy of Sciences, and three MU faculty were named 2021 American Association for the Advancement of Science Fellows. The National Academy of Inventors named MU’s Randall Prather to the 2022 Fellows, and MU honored five people with the 2022 William T. Kemper Fellowship for Teaching Excellence award. Marilyn Rantz, a Curators’ professor emerita at the MU Sinclair School of Nursing, was named to a national panel examining chronic problems in nursing home care in U.S, and Wilson Majee, an associate professor in the MU School of Health Professions, earned a Fulbright grant to boost community engagement efforts and assist disengaged, vulnerable youth in rural, resource-limited areas of South Africa. Finally, the National Science Foundation named the MU Graduate School a first-place winner for its “Taking Action: COVID-19 Diversity, Equity & Inclusion Challenge” in the STEM Graduate Student and Postdoctoral Researchers category.

This year, nearly 22% of the new MU students were first-generation college students and nearly 20% of incoming MU students were transferring from other institutions — proof that Mizzou is attracting a wide variety of students and enriching the campus community. Once here, students are exploring an array of disciplines through research and scholarly activity — inside and out of traditional laboratories. Two teams of MU students competed in the Solar Decathlon Design Challenge finals in Colorado, while a student team from the Missouri School of Journalism pitched an advertising campaign for a national client during the National Student Advertising Competition in Kansas City — giving participants real-world experience in their fields of study. Students with big ideas earned big money during Mizzou’s Entrepreneur Quest program, which awarded a $30,000 prize pool to three student ventures. Three textile and apparel management students won the College Vault Collection competition, designing custom apparel that was sold in The Mizzou Store this fall.

There are so many staff members who have spent years keeping our campus running smoothly. This year, we highlighted beloved Campus Dining Services staffer Adela Caratti and sunny soul Nani Fudge, a mainstay at the MU ID Office for two decades. And don’t forget Don Connor, Mizzou’s longest serving staff member, who has spent more than 54 years as a multimedia specialist at the College of Veterinary Medicine, and Jennifer Perry, a longtime sergeant with the University of Missouri Police Department who is taking her passion for righting wrongs to the next level by pursuing a law degree at Mizzou. Finally, the Staff Advisory Council rounded out the 2022 Staff Recognition Week by honoring 10 Outstanding Staff Award recipients.

What better way to support the next generation of students than to give back to support programs that elevate and change lives. This year, Mizzou received a number of generous gifts, including a $25 million donation to the MU Kinder Institute on Constitutional Democracy to increase faculty and grow student programs. Jeanne and Rex Sinquefield, through the Sinqufield Charitable Foundation, continued their support of the Mizzou New Music Initiative with a gift of $3.4 million, and a $1.8 million gift from Sue and Irl Engelhardt will ensure the Heartland Scholars program continues for first-generation, rural college students seeking a business degree. Additionally, the MU College of Veterinary Medicine received a $1.5 million gift from the Orthopedic Foundation for Animals to support its Canine Molecular Genetics Laboratory, which conducts thousands of tests each year.

Grants support critical initiatives and innovative research that pave the way for faculty and students to pursue their areas of study. This year, MU received a $25 million grant from the United States Department of Agriculture to help farmers adopt climate-smart practices — the largest federal research, education and extension grant ever awarded to an MU faculty member. MU also earned $12 million in grants  from the U.S. Department of Education to help MU researchers boost science education and literacy by using a video game to teach science lessons to middle schoolers and speech recognition software to improve literacy outcomes for second graders. MU Professor Xiu-Feng “Henry” Wan received a $5 million from the U.S. Department of Agriculture to study animal-human transmission of SARS-CoV-2, working to prevent another worldwide pandemic. An $8 million grant from the National Institute of Health will expand the National Swine Resource and Research Center at MU, where world-renowned researchers use genetically modified pigs to study human diseases, and a $2.6 million grant from NIH will help MU researchers design a new wearable heart monitor. And thanks to a $1.5 million grant from the U.S. Department of Education, MU’s long legacy of student support through the McNair Scholars Program will continue.

MU opened a new state-of-the-art $30 million School of Nursing building and broke ground on a new Veterinary Medical Diagnostic Laboratory that will play a  major role in the early detection, testing and post-outbreaks of foreign and emerging animal diseases, including avian influenza, African swine fever, foot-and-mouth disease, rabies and chronic wasting disease. Other projects across campus include the Tiger Football Indoor Practice facility, which is scheduled to be completed in Summer 2023, and Children’s Hospital, scheduled to be completed Spring 2024. The MU Counseling Center moved to a new home this year on the fourth floor of Strickland Hall, a centrally located building that students can find and navigate easily.

9. Mizzou researchers still at forefront of fighting COVID-19 and its impact

From the beginning of the pandemic, MU researchers have been studying the COVID-19 virus and its ever-evolving variants. This year, MU scientist helped detect novel SARS-CoV-2 variants in New York City wastewater  and worked to show how the evolving virus evades antibodies from vaccines and previous infections. A new study from the School of Medicine and MU Health Care showed patients hospitalized with COVID-19 pneumonia have a higher risk of developing dementia. Another MU study identified mutations specific to the omicron variant, showing the impact of mutations on pre-existing antibodies among vaccinated individuals and those who previously tested positive. MU researchers also looked at other impacts of the pandemic, including  how storytelling helped college students relieve stress and improve confidence during the COVID-19 pandemic. Another MU researcher studied how historical mistrust in government and the health care industry contributed to COVID-19 vaccine hesitance for African Americans.

The year wouldn’t be complete without a shout-out to Marching Mizzou. The 350-member ensemble, which includes the band, drumline, feature twirlers, color guard and the Golden Girls, took to the streets of New York City in November, leading the 98th annual Macy’s Day Parade. It was a once-in-a-lifetime experience for participants, who spent months preparing for the event. Enjoy the fun all over again with this photo gallery: Marching Mizzou at the Macy’s Thanksgiving Day Parade. 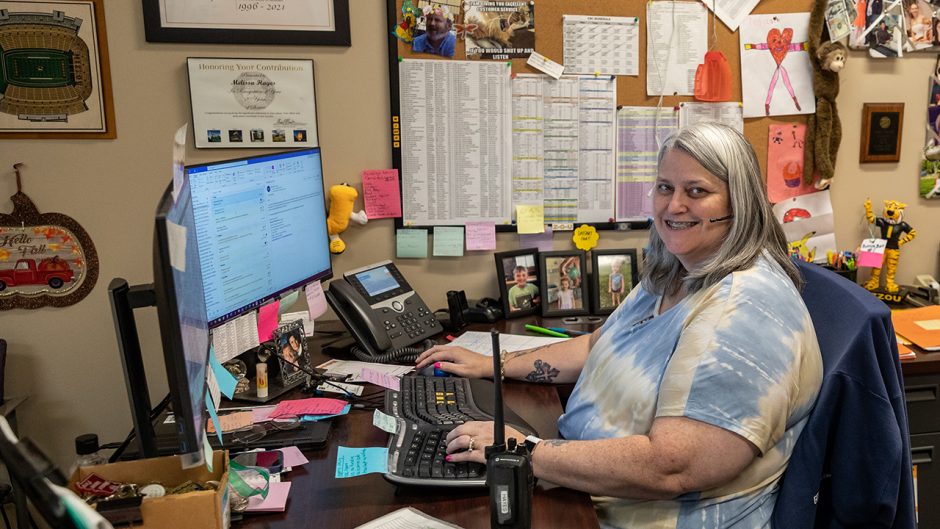