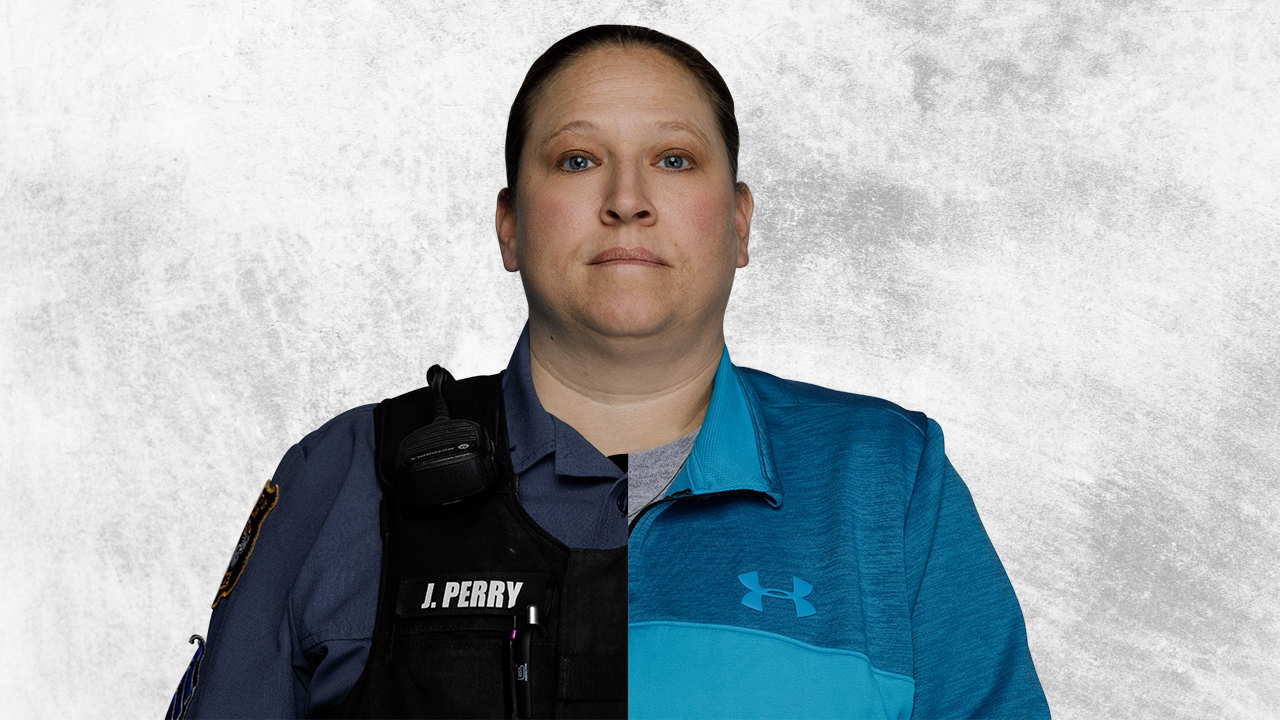 Jennifer Perry, a sergeant with the University of Missouri Police Department, has been with MUPD for 20 years and is now taking her passion for justice to a new level by attending the MU School of Law.

When she was in high school, Jennifer Perry told her mom a teacher was repeatedly calling students “stupid.” It was demoralizing, and Perry knew it was wrong.

“Do you want me to intervene?” Jane Perry asked her daughter.

“No, I can handle it,” Jennifer Perry said.

A teenage Perry wrote a letter to the teacher, suggesting — with tact — that maybe the reason students were struggling in class was because of the teacher’s method of instruction. Her diplomacy struck a chord with the teacher, who took Perry’s feedback to heart and became more understanding and less critical of students.

Today, Perry, a sergeant with the University of Missouri Police Department (MUPD), is still on the path to righting wrongs — unafraid to speak her mind. The veteran policewoman, with 20 years of experience at Mizzou, is taking her passion for justice to a new level by attending the MU School of Law. If all goes to plan, Perry will graduate in five years.

That’s a daunting task for a mom working full time and raising a 6-year-old son, even with the support of family and co-workers. But Perry is indomitable: a breast cancer survivor who worked her way through undergraduate and graduate degrees and chose to have a child on her own — all while supporting food banks, cancer research and homeless and animal shelters, to name a few.

“Jenny has always been a champion for the underdog,” Jane Perry said. “That will never change.” 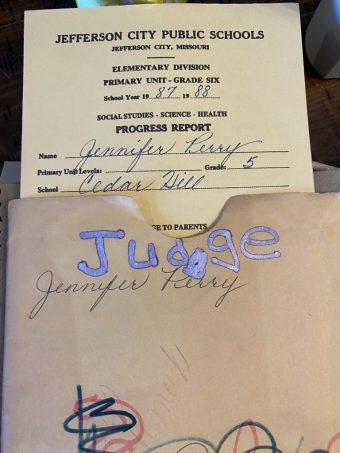 Perry set her sights on being a U.S. Supreme Court Justice and signed her fifth-grade report card as “Judge Jenny.”

Jennifer Perry was born in Kirksville, Missouri, but moved with her family to Jefferson City, Missouri, when she was in third grade. There, she quickly became involved with school, sports and church activities. Originally, Perry wanted to be a veterinarian like her Uncle Roy, a country vet who spayed the family puppy in the basement of her grandma’s home on Thanksgiving Day. Her two older brothers were horrified; 6-year-old Perry was enthralled.

“After that, I went home and took a red magic marker and drew a line down the stomach of all my stuffed animals and dolls to pretend I had performed a spay on them,” she recalled. “So, for a while, I wanted to be a vet.”

That changed in 1981, when Sandra Day O’Connor was named the first woman to the United States Supreme Court. Perry set her sights on being a U.S. Supreme Court justice. She even signed her fifth-grade report card as “Judge Jenny.”

In high school, Perry’s house was the place where she and her friends congregated. Back then, her mom worked for the state. So did her dad, who died in 2011. Her mom had returned to college when Perry was in junior high, to complete a second master’s degree. Education was important to the Perry family.

When Perry enrolled at Mizzou in 1995, she planned to major in history — her long-term goal still being law school. But history wasn’t her thing. She was interested in people and what makes them tick. She changed her major to psychology with a minor in political science. In true Perry fashion, she tested into Spanish III, took extra hours and graduated from Mizzou in only three years.

A career in law enforcement

As fate would have it, there was a snafu with Perry’s paperwork to get into law school after she completed her undergraduate degree. She quickly pivoted and accepted a job with the Missouri Department of Corrections and enrolled in a Master of Criminal Justice program at Columbia College. She worked by day and went to school at night, even putting in extra hours as an events staff worker at the Hearnes Center. It was a heavy load.

“I’ve never been afraid of hard work,” she said. “I was young and could survive on little sleep.”

Two years after earning her graduate degree, Perry landed a job with the MU police department in 2002. Through the years, she received specialized training in identifying drivers impaired by drugs and alcohol, and eventually became MUPD’s field sobriety instructor. Perry later served three years as a crime prevention officer and was promoted to sergeant in 2013.

Lt. April Colbrecht was Perry’s field training officer when she joined MUPD. She quickly recognized Perry’s knack for the job.

“She has good judgment and can read a situation really well,” said Colbrecht, who added that over the years, she has relied on Perry’s input. “Just because I’m lieutenant, I rarely make decisions without her input. I trust her opinion. I think the two of us make a very good team.”

Colbrecht isn’t surprised by Perry’s decision to pursue a degree in law.

“Once Jennifer sets her mind to something, she’s on it,” Colbrecht said.

Lt. Buddy Anliker, who has known Perry for more than 20 years, said her most impressive traits are her intelligence and ability to quickly learn from her mistakes and successes.

“She is one of the most intelligent people I have ever worked with in policing,” he said. 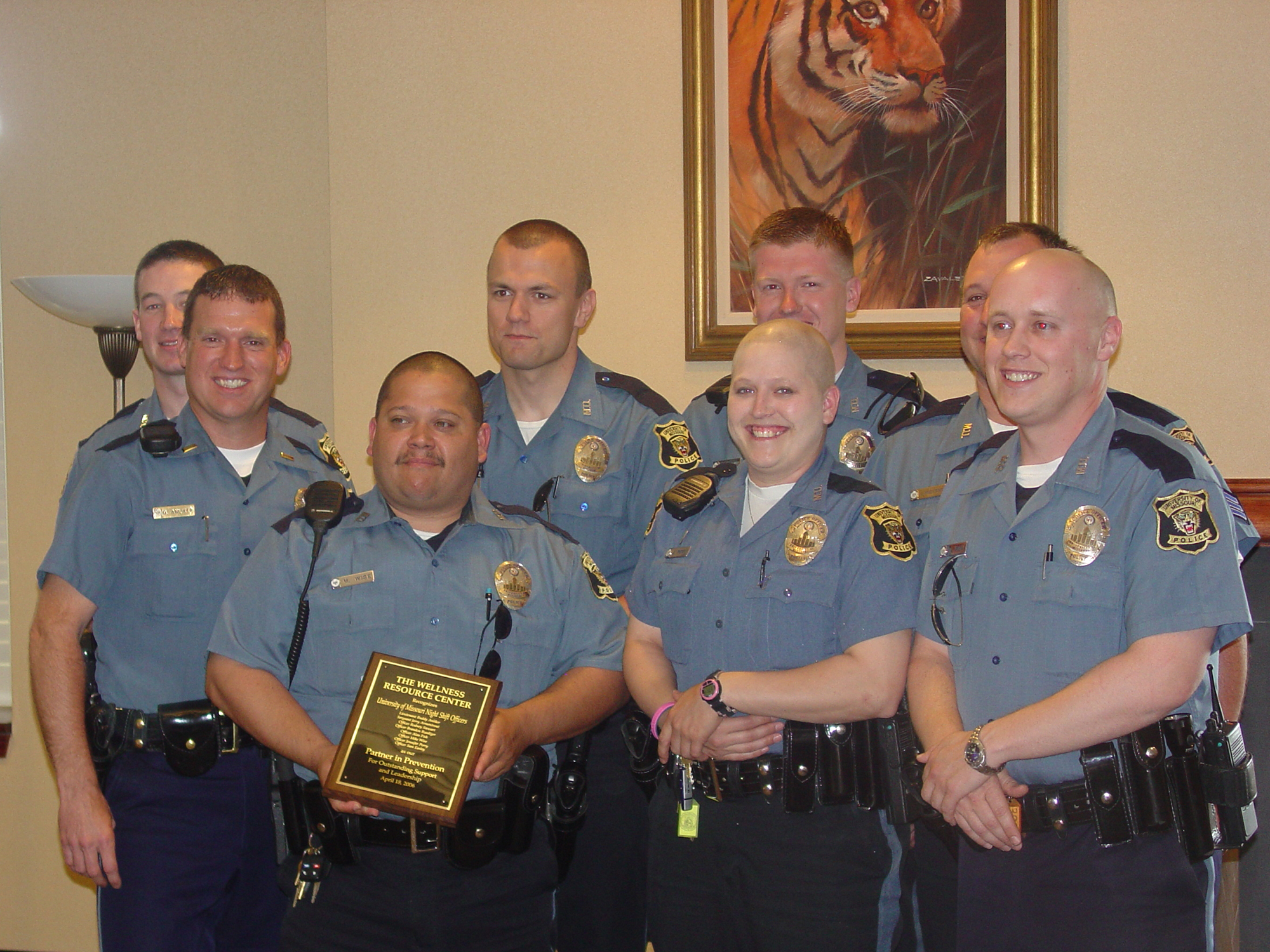 Three years after joining MUPD, Perry, center, was diagnosed with Stage 3A breast cancer. After surgery, she continued to work light duty through the first 10 rounds of chemotherapy.

Facing her own mortality

Perry’s determination has helped her in her personal life, too. In the summer of 2005, amid her career growth at Mizzou, Perry noticed a lump in her armpit. She was recovering from a cold and thought it was a swollen lymph node. No big deal.

“But the cold went away, and the lump didn’t,” Perry said.

Three months later, she had it checked and was admitted to a hospital in Jefferson City the next day for surgery: It was Stage 3A breast cancer. Her mother was there when Jennifer Perry got the news.

“I could feel the air leave the room,” Jane Perry recalled. “But in a flash, I saw Jenny set her jaw, and I knew she was ready to fight.”

After surgery, Jennifer Perry worked light duty at MUPD through the first 10 rounds of chemotherapy. Her strength and persistence remained true, and she returned to full duty through 30 more rounds of radiation. She’s been cancer-free ever since. And while the experience was physically and emotionally taxing and a temporary blow to her self-esteem, it eventually awakened a bolder, more independent Jennifer Perry.

“At 27, I faced my own mortality,” Perry said. She said, over time, she decided to live life on her own terms.

More than six years ago that meant fulfilling a dream to be a mom and having a child on her own. Today, Perry has a 6-year-old son named Atticus and is happily married to Anthony Keith, whom she met when Atticus was 2. Perry’s mom has joined Perry, Keith and Atticus along with their two dogs and two cats in Millersburg, Missouri.

“Your life can look like how you want it to look, not like how society says it should look,” Perry said. 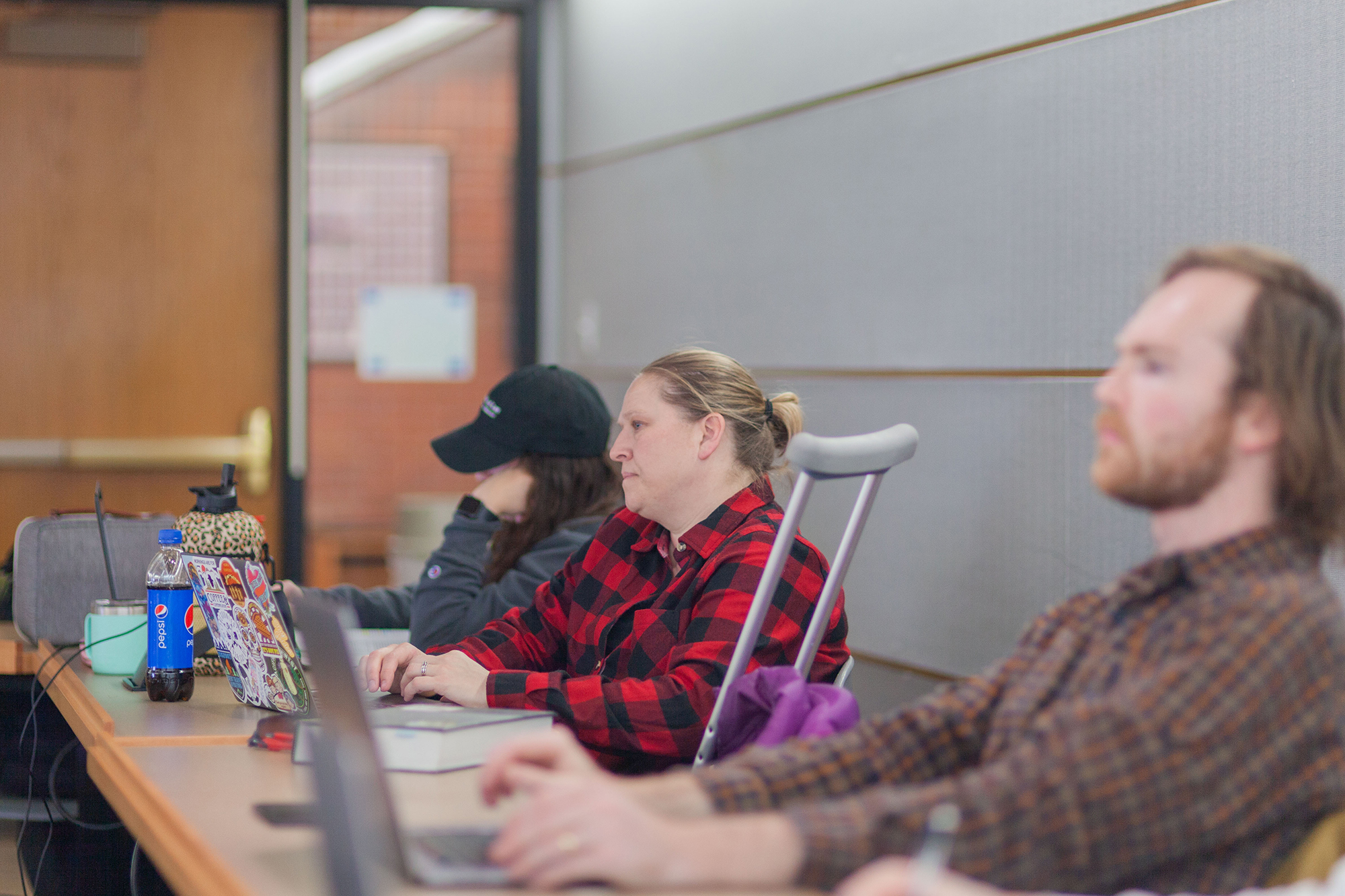 Returning to school has been a bit of an adjustment for Perry, but she looks forward to fulfilling her childhood dream of becoming an attorney.

Becoming a mother also pushed Perry to reconsider her career and the risks that come with being in law enforcement. Ultimately, she realized her dream to be an attorney had never died. With roots deeply planted in mid-Missouri, Perry never considered another option but the MU School of Law. Besides her family, she also has the support of a former MUPD officer now halfway through his Mizzou law school journey.

But returning to school has been a bit of an adjustment.

“Learning the technology stuff has been hard. And taking notes on a laptop instead of by hand is different than I am used to as a student, but I enjoy school and learning,” she said. “I am older than most of my classmates, but I think I bring life experience to our discussions.”

At this point, Perry isn’t sure what type of law she wants to go into. Like the teenage versions of Perry, though, chances are it will have something to do with giving voice to the voiceless. While she is known to hold high standards for her co-workers, those closest to her know Perry has higher expectations of herself.

“Jennifer has a way of making everyone around her a better person,” said Keith, her husband. “I’m lucky to be on this journey of life with her.”

Jane Perry suspects that long after her daughter gives up the badge, she’ll still have the heart of a police officer.

“I don’t think that uniform will ever really come off. When Jenny sees a need, she jumps in to help.”