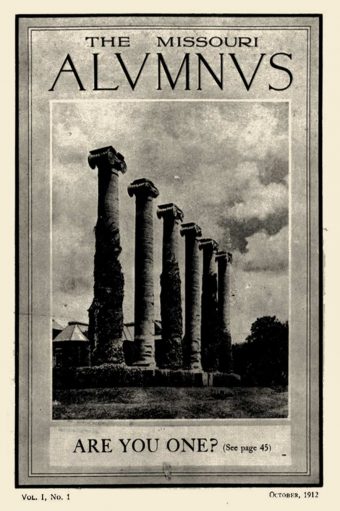 MIZZOU, the magazine of the Mizzou Alumni Association, provides news and information about the University of Missouri to thousands of readers worldwide.

Stories reach a global audience online at Show Me Mizzou. As an exclusive benefit of membership in the Mizzou Alumni Association, members receive print issues of MIZZOU magazine in their mailbox three times a year. Join today!

“Our University is becoming too large not to have such a paper. We should all know what is happening around the columns; we should also know what the sons and daughters of Old Missouri are doing abroad. The University has fulfilled its duty towards us; it now behooves us to fulfill our duty towards her.” — The Missouri Alumni Quarterly, Volume 6, Number 1 (Spring 1910)

Despite the clamor for “such a paper,” the infrequently produced Missouri Alumni Quarterly lacked the funding or dedicated staff to meet the needs of a rapidly growing Alumni Association. In its final issue, a resolution was proposed — to enact upon each member “an obligation of $1.00 annually” for the publication of an official alumni magazine.

The inaugural issue, then called The Missouri Alumnus, was published in fall 1912. In 1995, the magazine adopted the name MIZZOU, a nod to the university’s affectionate nickname, and began mailing the magazine internationally with the Winter 2011 issue.

Today, the magazine continues to report credible and engaging news about the University of Missouri community to an audience of Tigers worldwide.