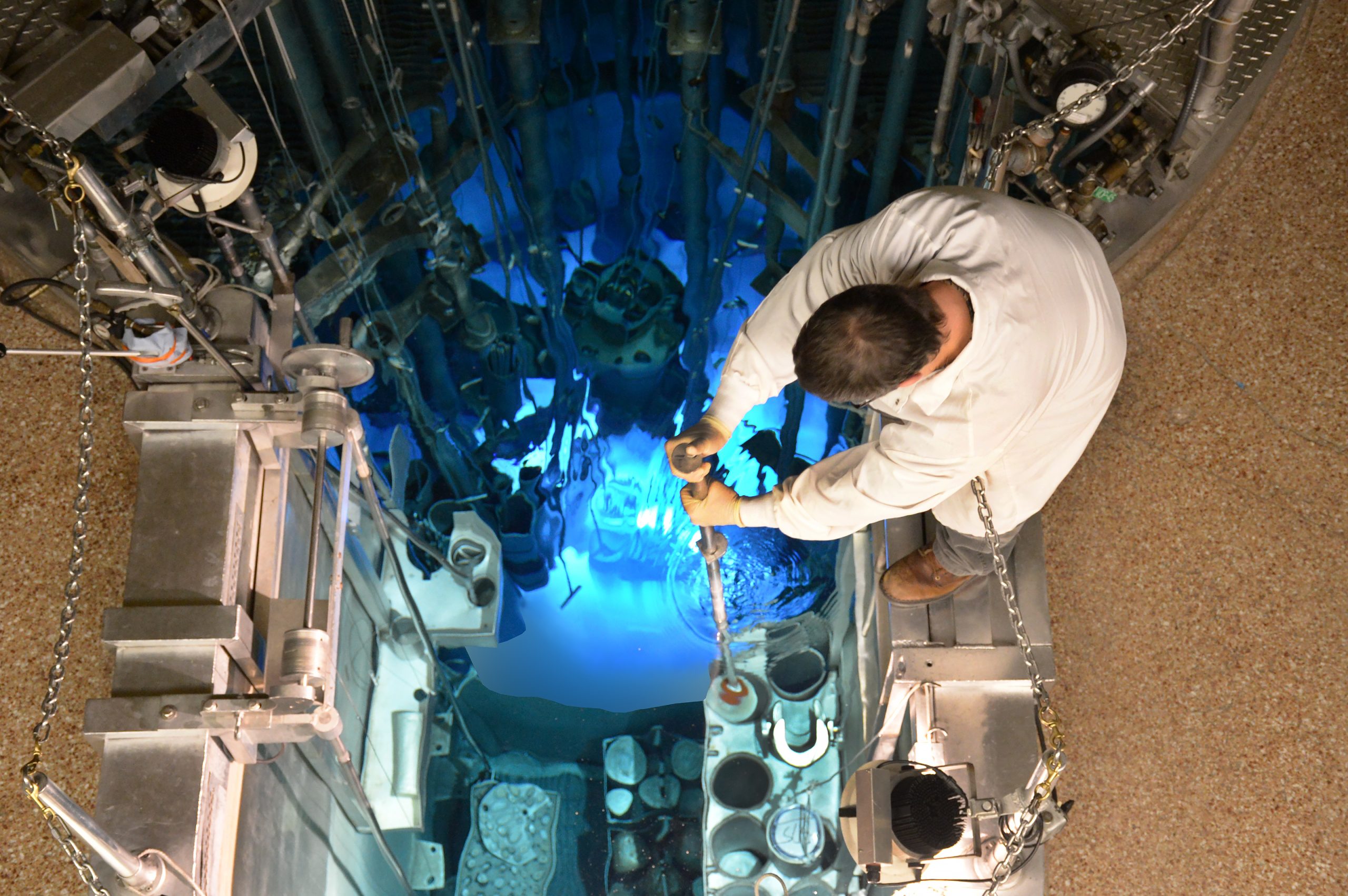 When the research reactor core at the University of Missouri Research Reactor (MURR) is seen from above, it’s surrounded by a nearly 30-foot-deep pool of water that gives off a blue glow. This phenomenon is known as Cherenkov radiation, a form of energy produced when high-energy electrons travel through the water and emit visible light as they slow down. Here, a reactor operator at MURR retrieves a sample can from the reactor pool.

While the field of nuclear medicine and radiopharmaceuticals is experiencing a renaissance, the University of Missouri Research Reactor (MURR) has long been a leader in developing lifesaving imaging and cancer treatments. Now, the most powerful university research reactor in the United States is well positioned to continue supporting this healthcare revival through significant investments and planned multimillion dollar expansions.

“With these critical investments, we are on our way to becoming the epicenter of nuclear medicine right here in Columbia, Missouri,” University of Missouri President Mun Choi said. “This life-changing work will have far reaching impacts, not just for Missourians, but also for people around the globe.”

Radiopharmaceuticals — medical drugs containing radioactive isotopes like iodine-131 — have been around for decades, and recent advancements in technology have given rise to new cutting-edge, precision cancer treatments known as targeted radiotherapies. New targeted radiotherapies include Lutathera®, which uses lutetium-177 (Lu-177), a radioactive isotope produced at MURR to target and destroy specific cancer cells. 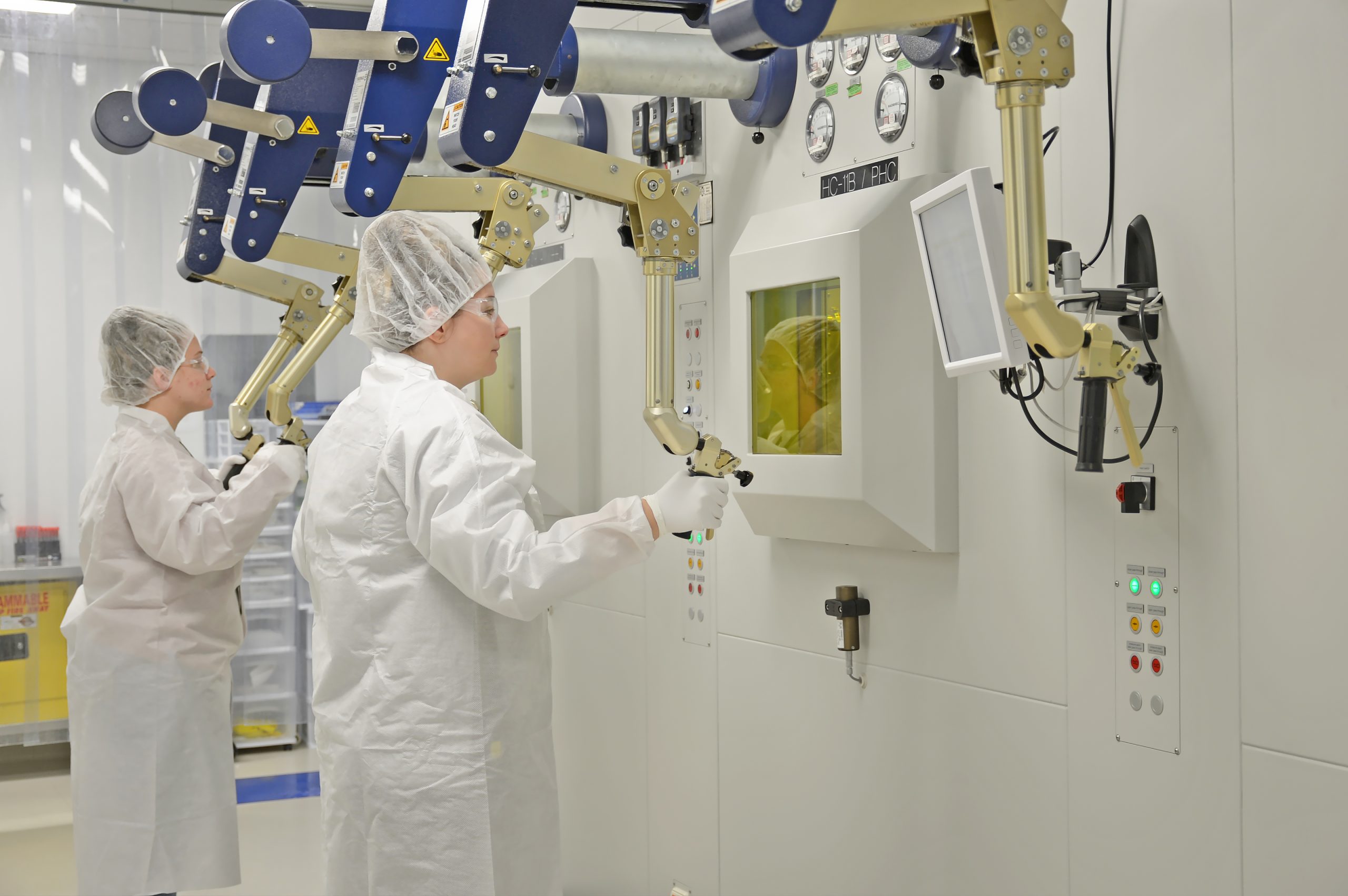 Technicians at the University of Missouri Research Reactor (MURR) use telemanipulators to prepare iodine-131.

One advantage of targeted radiotherapy is the ability to deliver drugs directly to the site of cancer in the body and target those cancer cells without having the broader side effects of traditional cancer treatments. For example, chemotherapy can cause inadvertent damage to otherwise healthy parts of the body because the medicine will often harm healthy tissues, creating a cascade of unwanted side effects for the patient. 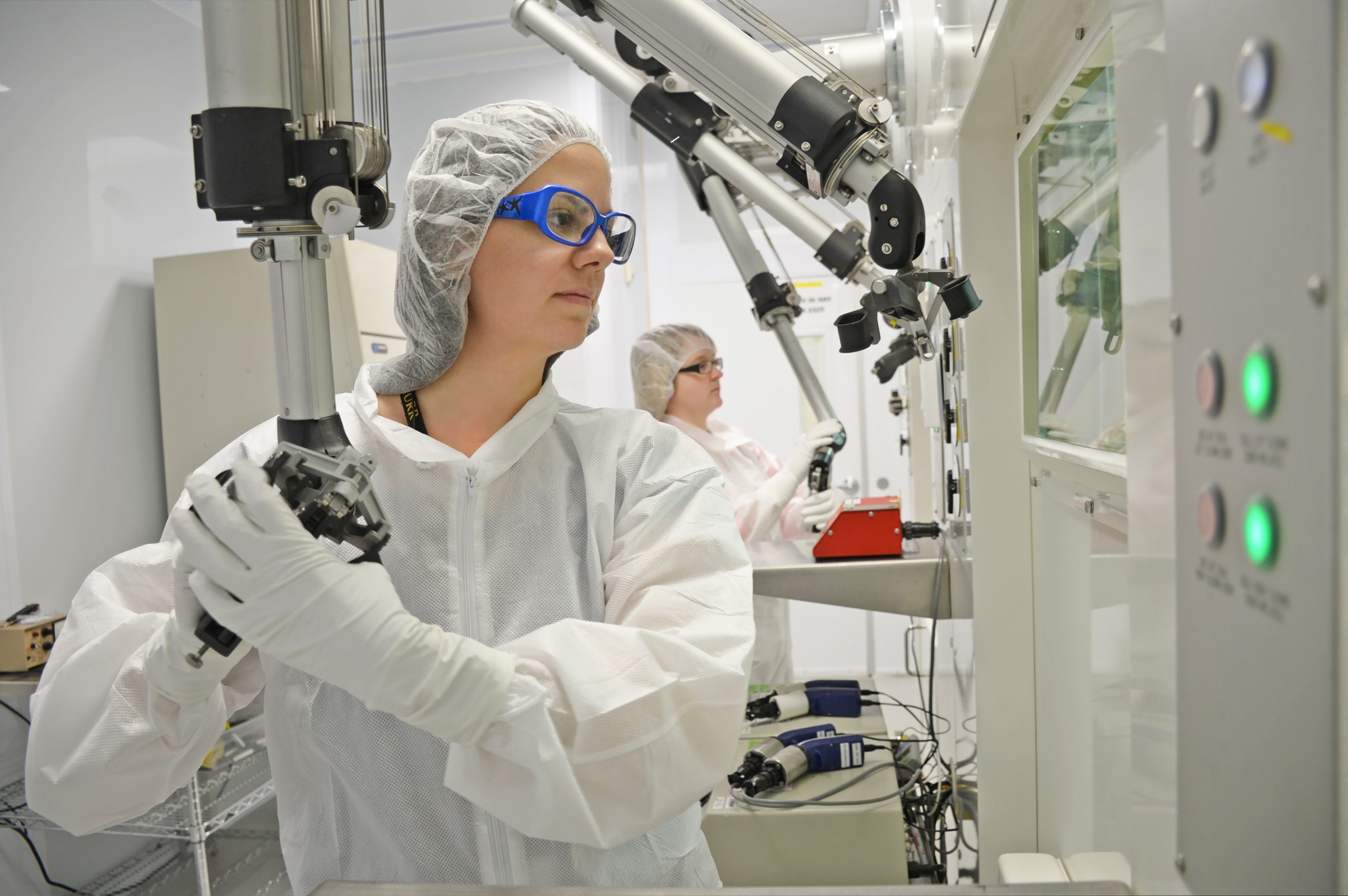 A technician at the University of Missouri Research Reactor (MURR) uses telemanipulators to prepare lutetium-177.

MURR’s innovative design and operating cycle help the facility produce an average of 10,000 medical doses a week. J. David Robertson, executive director of MURR, said an uninterrupted supply of these short-lived radioactive isotopes is vital for patients to receive their necessary treatments on time.

“These drugs cannot be stockpiled due to their short half-lives, or their quickly diminishing effectiveness as their active ingredients undergo radioactive decay,” Robertson said. “This means that if we do not produce them this week, then cancer patients will not receive their treatments next week.”

Once the radioactive materials made at MURR are ready to ship to customers, the facility uses specially designed canisters to safely transport them to their final destinations around the world. Delivery involves a combination of commercial shippers, courier services and commercial airline flights. Historically, MURR has worked with more than 140 customers in more than a dozen countries around the world. In 2021, MURR shipped nearly 2,500 packages of radioactive materials. 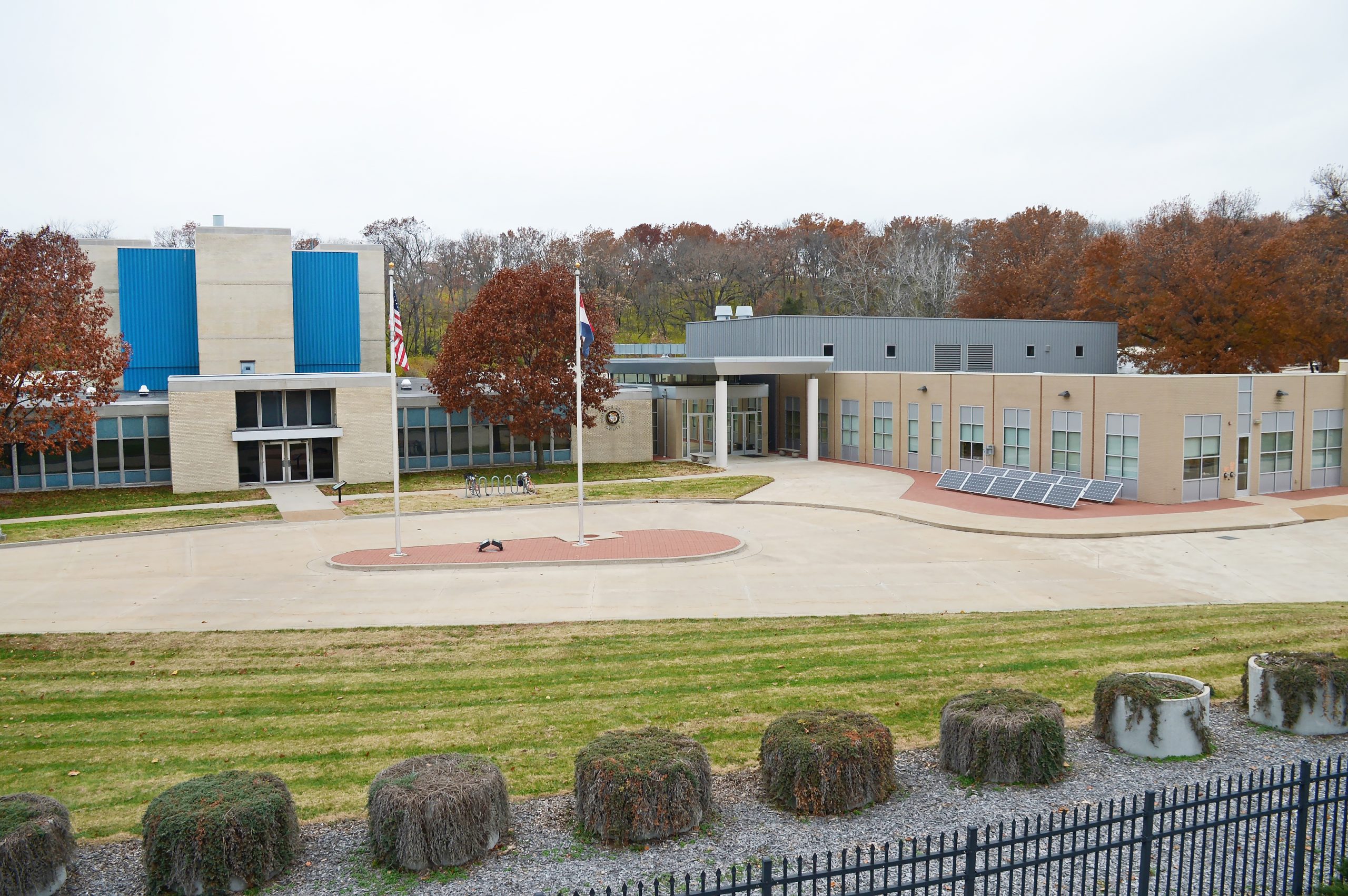 The University of Missouri Research Reactor (MURR) was built on the site of a former polo field just south of MU’s academic campus.

Built on the site of a former polo field just south of MU’s academic campus, MURR began operating in 1966. Today the research reactor operates year-round — 24 hours a day, 6.5 days a week, 52 weeks a year — and pauses only 12 hours a week for refueling and routine maintenance conducted by MURR staff.

“We are a full-service operation, from production to maintenance and shipping services,” Robertson said. “This includes the in-house fabrication of replacement parts — matching original specifications — so we can ensure that we continue to stay operational and don’t have a delay in making these life-saving treatments.”

MURR’s operating schedule allows the research reactor’s 10-megawatt core — no bigger than the size of a standard refrigerator — to produce various radioactive isotopes for scientific research and discovery ranging from anthropology to human and veterinary medicine. This work includes producing radioactive isotopes for geochemical analysis — akin to chemical fingerprinting — conducted by the Archaeometry Laboratory at MURR, which uses its access to the research reactor core for neutron activation analysis of archaeological samples.

MURR, which has operated for more than 50 years, was awarded a 20-year operating license extension in 2017 by the U.S. Nuclear Regulatory Commission. As both demand and interest to develop new radioactive isotopes for use in medicine and other scientific research continues to increase, MU officials and MURR staff are developing various plans to help MURR remain a leader in nuclear research and medicine.

Those plans include a $20 million expansion to MURR, dubbed “MURR West,” which will allow the facility to increase its production and research with radioactive isotopes. Along with adding space for MURR’s growing professional staff, MURR West will also allow MURR to support various industry partners in their efforts to develop radiopharmaceuticals in a business incubator-type space. The three-story, 43,000-square-foot addition is scheduled for completion in 2024.

To help MURR make the greatest scientific impact possible by using the latest technology available, efforts are also underway to develop a next-generation research reactor that would allow an increase in production of radioactive isotopes, and potentially include ones not currently in production at MURR or even developed yet by scientists. A new facility could also open doors for MURR to participate in other scientific opportunities within the field of materials science, Robertson said.

In addition to MURR’s future plans, MU is strengthening the partnership with the U.S. Department of Energy by planning a radioisotope processing facility located on the south end of Columbia. With an anticipated completion date of 2025, the estimated $27 million facility expects to receive isotopes from the DOE national laboratories for MURR experts to process and then ship to researchers in universities, industry laboratories and other partners as determined by DOE.

To learn more about this research, visit: A chance at ‘upcycling’ life

Plans will likely lead to new developments that could eventually be added to MURR’s list of noteworthy events over the years. These successes include: 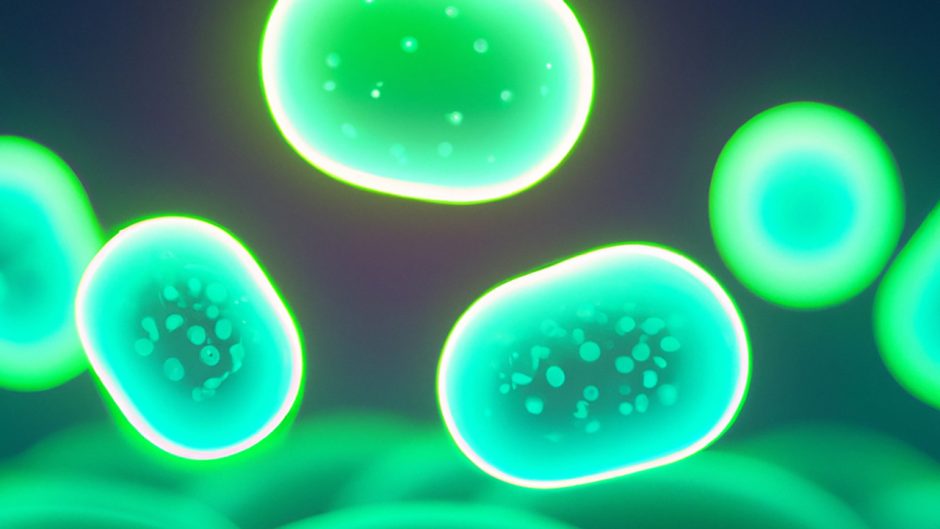