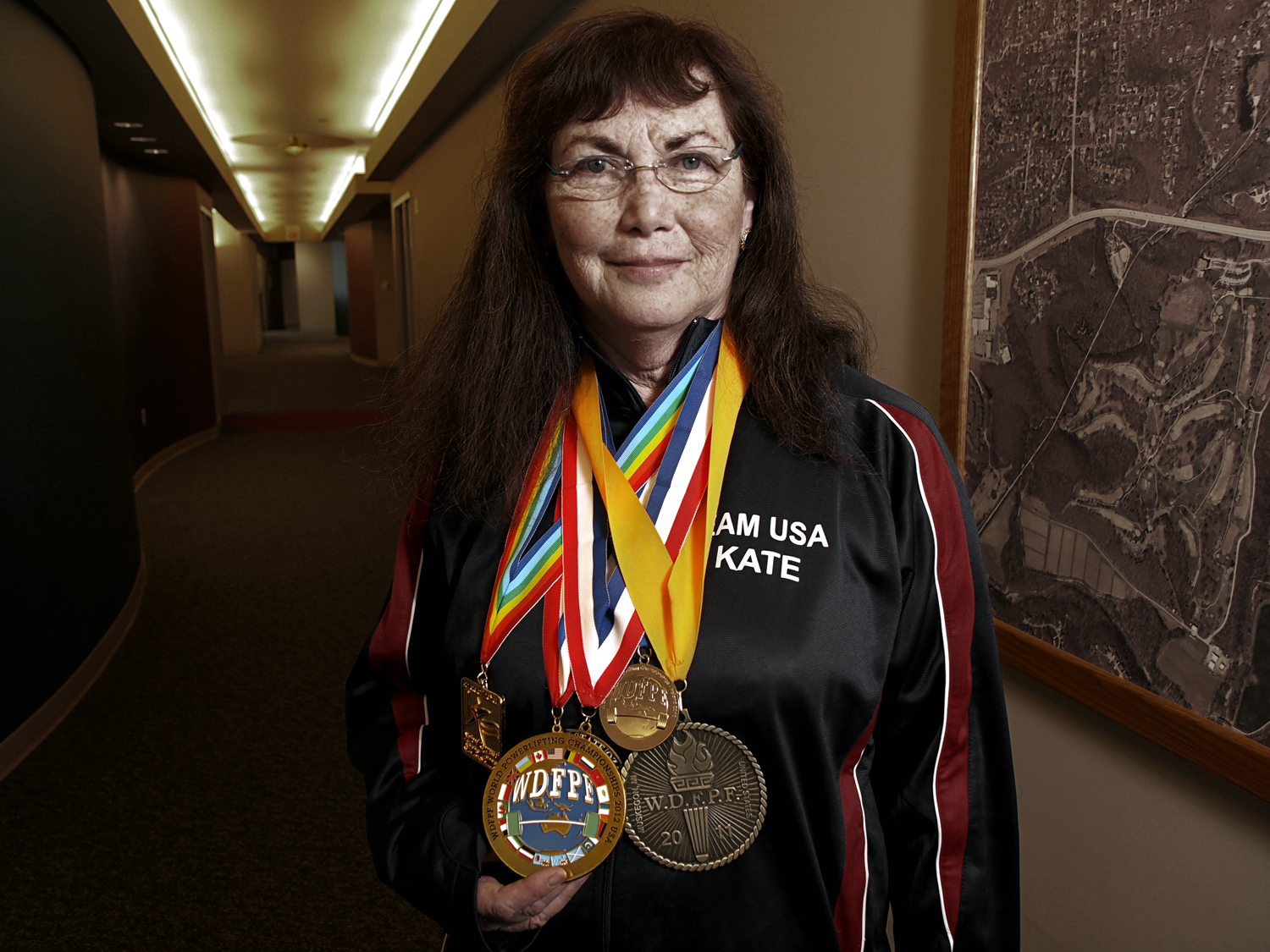 Kate Walker, MSW ’81, is a five-time world champion power lifter who holds six world records in her age class and weight class. She’s also an MU Campus Facilities training and development coordinator, a lifelong dancer, an enthusiastic yoga instructor and — as of Nov. 15, 2015 — a Missouri Sports Hall of Fame inductee. But when the 66 year old chats with younger male weightlifters, their interest is often confined to a single subject.

“ ‘What’s your bench?’ ” says Walker, laughing. “When I started weightlifting, I had zero interest in bench press because that’s all the jock football guys care about.”

Walker has always been active. A self-described tree-climbing tomboy as a child, she was 5 when her mother ushered her into tap-dancing and ballet. She even studied dance at Yale University before earning a dance degree at Stephens College.

But when arthritis from a torn meniscus rendered her less mobile in 1995, she gained weight and struggled with depression. She could no longer camp and hike with her husband, Andrew, and she spent most of her time “riding an exercise bike and watching the O.J. Simpson trial.”

“It was like tearing the wings off a bird; my whole identity was dancing,” Walker says. “I went to physical therapy and realized they were giving me the same exercises as 70 and 80 year olds, and I thought, ‘I’m never going to get anywhere.’ ” In 2003, with the help of her trainer, Tom LaFontaine, PhD ’83, a clinical exercise physiologist at Optimus Performance, Walker learned the basics of power lifting. Pumping iron came naturally, and eventually she entered the 2007 Show-Me State Games.

“I felt like everyone’s grandmother,” says Walker, who has competed as far away as France and Ireland. “I had no idea what I was doing, but [the events were categorized] by age and weight class, and I won gold.”

With the slogan “never too old” pressing her ever upward, Walker strives to beat her world records in the squat, deadlift and bench categories, which register 82.5 kg, 115 kg, 50 kg, respectively. She is also seeking sponsorship to cover travel and expenses at international competitions, and she hopes to someday add motivational speaking to her repertoire.

“At the hall of fame press conference, I look over and there’s (NFL alumnus and fellow inductee) Jerome Sally, BS Ed ’82, and (former MU athletic director) Joe Castiglione. I’m thinking, ‘Am I in the wrong room?’ ” Walker says. “I’m totally overwhelmed and thrilled to be in the hall of fame.”