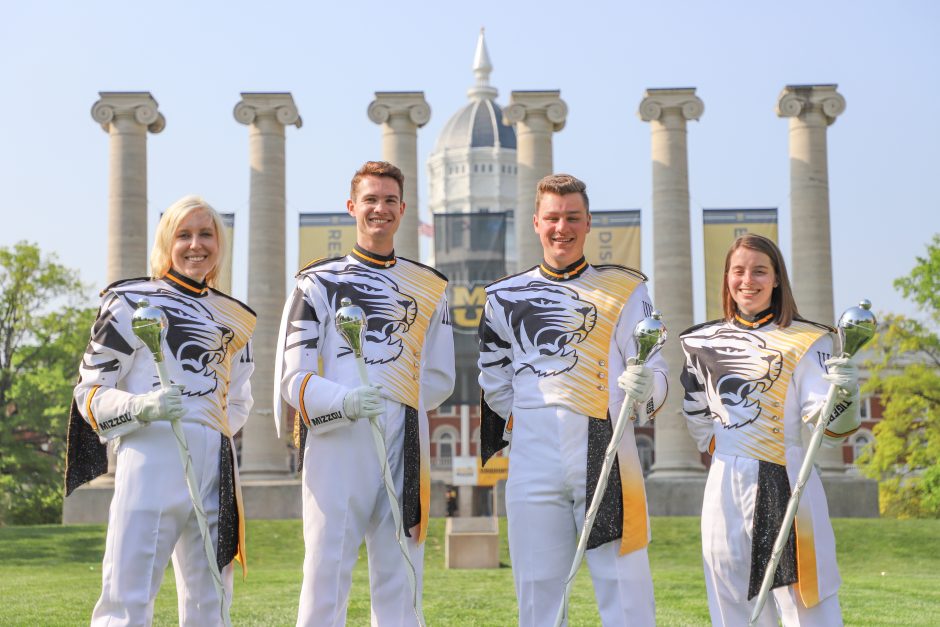 From left Meg Swords, Cooper Gibbs, Alex Weinzierl and Kristine Malone will be leading Marching Mizzou on the streets of New York City this fall during the 2022 Macy's Thanksgiving Day Parade.

For many people across the United States, their annual Thanksgiving holiday begins with watching hundreds of participants — either in-person or on TV — weave through the streets of New York City surrounded by towering floats and huge balloons floating above. The Macy’s Thanksgiving Day Parade — which started as a Christmas parade in 1924 — has been a long-standing Thanksgiving tradition with sights and sounds that dazzle people of all ages.

Last year, Marching Mizzou was invited to be among nine marching bands to perform in the 2022 Macy’s Thanksgiving Day Parade after being selected from more than 100 applicants. This fall, on Thursday, Nov. 24, for the first time in the history of the University of Missouri’s marching band, the 350 members of the band, drumline, feature twirlers, color guard and Golden Girls will be part of the sights — and, most importantly, sounds — of the parade.

The marching band will perform along the parade’s 2.5-mile route through the streets of NYC, ending with a short-televised performance on West 34th Street. But before members of Marching Mizzou step off on the streets of NYC this fall, the ensemble’s “Macy’s Thanksgiving Day Curriculum” — designed by Amy M. Knopps, associate director of bands and director of Marching Mizzou — will teach the drum majors about other entries in this year’s parade, past entries and street names and photos to help visualize the route.

In addition to the ongoing Macy’s Thanksgiving Day Curriculum, the drum majors and the rest of the Marching Mizzou leadership team also successfully completed a five-week spring leadership course that ended in early May. As they continue to prepare, the drum majors eagerly await that special day in November when the members of Marching Mizzou will experience the 96th annual parade not as audience members, but as a part of the magic. 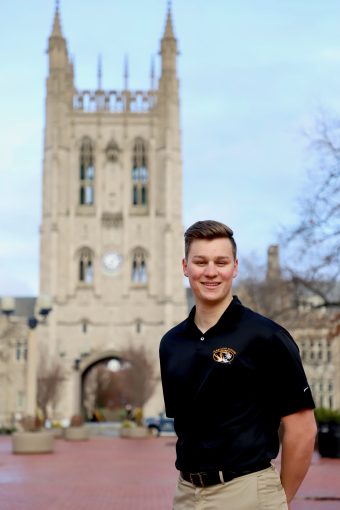 As a drum major, Weinzierl is responsible for conducting the band, leading the parades and holding tempo, all while being one of the most visible students in the ensemble. He said a drum major’s responsibility doesn’t end with the final note of a musical composition — but also extends outside of the band’s public performances.

“Drum majors are the highest student-held leadership positions in the band,” Weinzierl said. “As drum majors, it is our job to make sure we are as prepared as possible so that when questions or obstacles arise, we are able to answer them.”

Weinzierl said this added preparation will help band members with their nerves for the Macy’s Thanksgiving Day Parade performance.

“The Marching Mizzou leadership team is looking at every detail that relates to the parade so that we are ready to go when the fall season starts,” he said. “By understanding everything that is happening, we can be more at ease when November comes.” 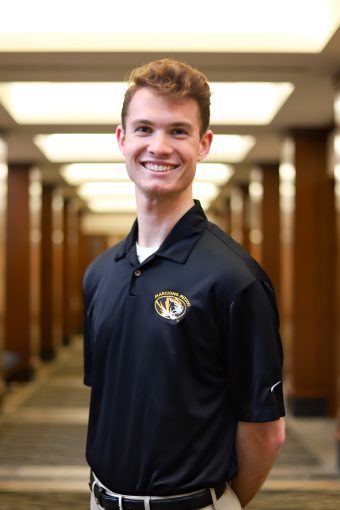 Gibbs has been a part of a band program since he was in the sixth grade, but participating in Marching Mizzou has been his most exciting band experience yet.

“When I came to MU, I loved college football, and I loved being able to travel,” he said. “I figured that Marching Mizzou would be a great opportunity and a great place to start meeting some friendly faces. That’s what prompted me to join the band, and I absolutely love it.”

Though he joined Marching Mizzou more as an extra-curricular activity, Gibbs understands the responsibility of leading band members through the streets of NYC this fall as a drum major.

“It’s just such an honor,” he said. “I think most people at the parade will probably have heard of us but won’t know anything about MU. So, it will be really cool to be up there and have the attention of all these people and be ambassadors for our state.”

With the parade still months away, the band will spend much of the remaining time practicing for its time on the big stage in NYC.

“This is one of the biggest things we’ve ever done,” Gibbs said. “I just can’t wait.” 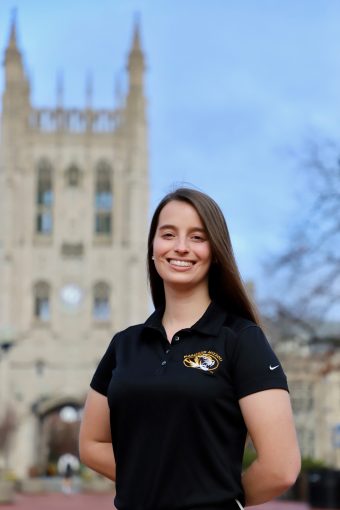 Senior and fourth-year member of Marching Mizzou
Hometown: Fulton, Missouri
Major: Health Science with an emphasis in Pre-Professional and minors in Biological Sciences and Leadership and Public Service
Instrument: Piccolo

Malone chose to come to MU for Marching Mizzou — and the band is why she has stayed.

“I immediately fell in love with Marching Mizzou, and that is what kept me at MU because I was originally planning on going to University of Missouri-Kansas City, but I just couldn’t leave the marching band,” she said.

In April 2021, Malone suspected something exciting was about to happen when Knopps reminded her three times to make sure everyone in her instrumental section attended the band’s end-of-the-year banquet. However, she never would have guessed that the surprise was an invitation to participate in the Macy’s Thanksgiving Day Parade.

“When she said we were going, I was like ‘Oh my goodness!’” she said. “Of course, I had the jaw drop, but then I called my dad immediately. I knew I had to tell him!”

After all, this wasn’t Malone’s first time imagining herself participating in one of the most popular Thanksgiving traditions in the country.

“In high school, I actually looked into what it takes to go to the Macy’s Thanksgiving Day Parade,” she said. “It’s really competitive, so I just thought it probably wasn’t in the cards. And now here I am about to perform there in a few months. I’m excited to be on national television, to get Marching Mizzou’s name out there and to really recruit, not only for the band but also for the university.” 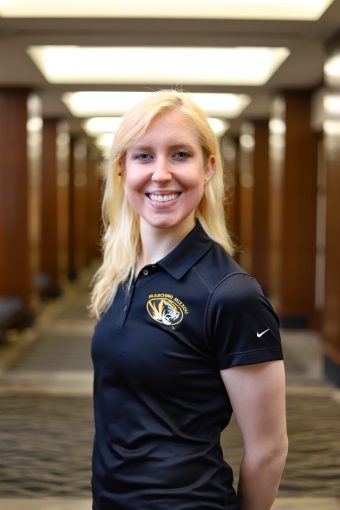 Swords has always dreamed about being a drum major for Marching Mizzou.

For Swords, the position represented an individual the other band members could look up to. Since joining marching band in high school, she made it a goal to earn that leadership position with Marching Mizzou.

“I was kind of lost in high school, but music was the only thing that made me happy,” Swords said. “So, when I got into the MU School of Music, it felt like the faculty saw something in me, and that meant a lot.”

Now, after being a finalist during her sophomore and junior years for the drum major position, Swords finally gets her chance to step into those shoes this fall. What’s more, by leading the band in the Macy’s Thanksgiving Day Parade, her family and friends will be able to easily spot her on TV.

“I’ve watched the parade every year,” she said. “My family and I would see a clarinet player walk by on TV, and my parents would shout, ‘That’s you!’”

This fall, her parent’s prediction will be true, as Swords represents both MU and the state of Missouri at the internationally broadcasted parade.

For more on this story, please visit Let’s have a parade!

To learn more about making a contribution toward Marching Mizzou’s trip to NYC in November 2022, please visit Mizzou Give Direct.