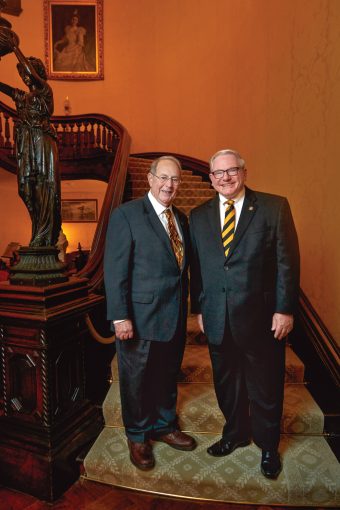 If you’re looking for Dave Griggs, Arts ’65, or Sen. Dan Hegeman, BS Ag ’85, start in the halls of the state capitol, where the citizen and the legislator, respectively, are regularly seen advocating for higher education in Missouri. For their efforts, the Tigers won 2022 Henry S. Geyer Awards for Public Service to Higher Education, awarded annually by the Mizzou Alumni Association.

Dave Griggs has been strengthening the town-and-gown relationship in Columbia since he opened a Color World store on Business Loop 70 in 1975. As a former member of the Boone County Commission and chair of Regional Economic Development Inc., Griggs saw the integral role Mizzou plays in the success of the regional and statewide economy. His leadership helped secure partnerships with multiple businesses, including IBM and ABC Laboratories, providing students with potential employment and internship opportunities. Today, Griggs serves as chair of the University of Missouri Flagship Council’s political action committee, talking to elected officials on both sides of the aisle about issues important to the university.

One of those legislators, Hegeman, has served in Missouri for nearly two decades and also has a deep appreciation for the relationship between the university and Missourians. Part owner of a six-generation family-owned farm, Hegeman experienced the university’s land-grant mission firsthand and went on to serve as president of the Andrew County University of Missouri Extension Council. Now as chair of the Senate Appropriations Committee, Hegeman works toward providing critical resources for public higher education and capital improvement projects, including a $15 million core funding increase for Mizzou, $10 million for the NextGen Precision Health facility and $15 million for a new veterinary medicine building.