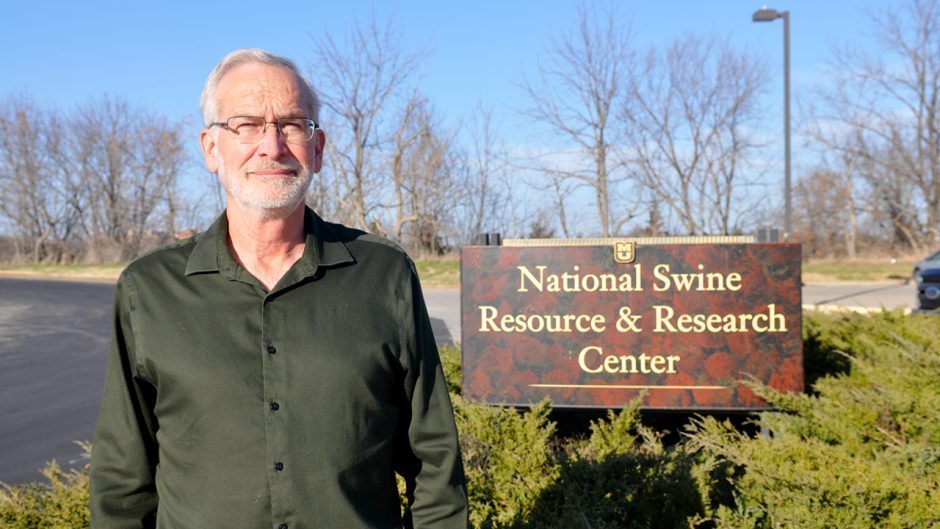 Today, the National Academy of Inventors (NAI) named Randall Prather to its 2022 Fellows Program. Prather, a Curators’ Distinguished Professor in the University of Missouri College of Agriculture, Food and Natural Resources, joins the ranks of an elite group of academic inventors recognized for their research and intellectual property contributions.

“I was pleasantly surprised to be named a NAI Fellow,” Prather said. “It is a nice recognition to have, especially with MU being a member of the Association of American Universities (AAU), and I think it also represents not just me but all my collaborators and team members that have contributed to our research efforts over the years.”

The NAI Fellows Program highlights academic inventors who have demonstrated a spirit of innovation in creating or facilitating outstanding inventions that have made a tangible impact on quality of life, economic development and the welfare of society.

Prather is the director of the National Swine Resource and Research Center (NSRRC) at MU, which recently earned an $8 million expansion grant from the National Institutes of Health (NIH). The center on MU’s campus has become the go-to source for genetically modified pigs used by researchers across the United States and other countries to study various diseases that impact humans, including retinitis pigmentosa, spinal muscular atrophy and cystic fibrosis, the most common genetic mutation affecting Caucasian adolescents in North America.

“Dr. Prather is very deserving of this special honor,” said Shibu Jose, associate dean for the CAFNR Office of Research. “His innovative research with genetically modified pigs has enabled investigators around the world to study potential therapies and treatments for diseases that impact humans.”

The 169 inventors named to the 2022 class of NAI fellows collectively hold more than 5,000 issued U.S. patents. Overall, NAI Fellows hold more than 58,000 issued U.S. patents, which have generated more than 13,000 licensed technologies and companies, and created more than 1 million jobs. More than $3 trillion in revenue has been generated from NAI Fellow discoveries to date. Prather alone has earned 21 issued patents in the U.S. and 56 issued foreign patents over the course of his 33-year career at MU.

“Some of our patents have furthered efforts related to xenotransplantation, the process of transplanting animal organs or tissues into human recipients,” Prather said. “This is important because there are currently more than 100,000 people on the organ transplant waiting list, mostly waiting for kidney transplants and some for heart transplants. There are others who would benefit from a transplant but currently are not eligible, so pigs can be a great resource going forward.”

For example, people with hepatitis are currently not eligible for human transplants due to concerns of infections to the liver.

“We have learned that pig livers do not get infected with hepatitis, so perhaps a pig liver might be a successful transplant option, so working on technologies has the potential to expand options and opportunities for those in need,” Prather said.

In January 2022, surgeons in Maryland successfully transplanted a pig heart into a human patient for the first time ever. Prather’s foundational research helped contribute to the historic accomplishment.

“Our goal is to provide resources and knowledge so that others can be successful in helping people,” Prather said. “Our work is a part of medical solutions for people. We are just one step in the journey, and it is satisfying to be a part of it.”

“Our research efforts here at MU using genetically modified pigs have helped us come up with a solution, and with FDA approval, the technology will positively impact the lives of pork producers, which is a key industry in Missouri and the Midwest,” Prather said.

Prather will officially become inducted into the NAI in the summer of 2023 in Washington, D.C.

“This year's class of NAI Fellows represents a truly outstanding caliber of innovators. Each of these individuals have made significant impact through their work and are highly-regarded in their respective fields,” said Paul R. Sanberg, President of the NAI. “The breadth and scope of their inventions is truly staggering. I am excited to see their creativity continue to define a new era of science and technology in the global innovation ecosystem.”

Note: For more on Prather’s research, see Paving the way for a historic procedure and Years in the making