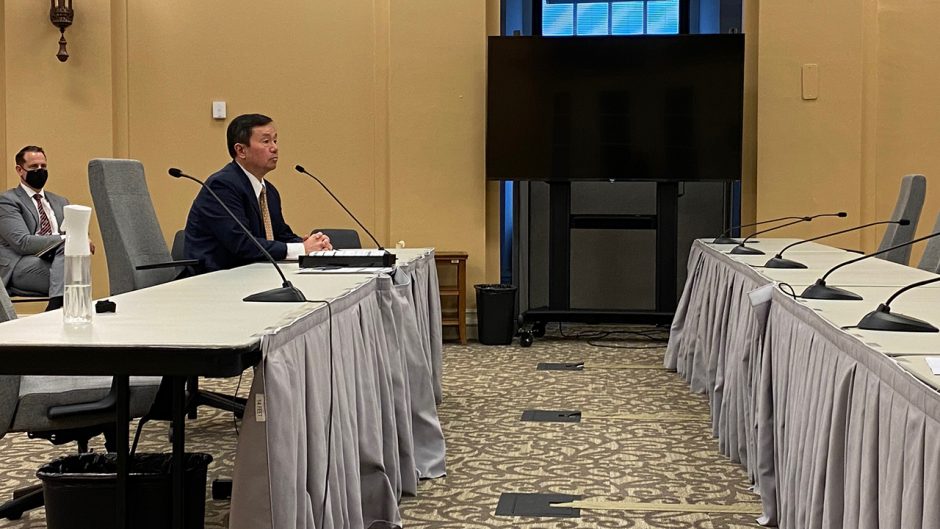 University of Missouri President Mun Choi testified before lawmakers Tuesday about funding the university system for the new fiscal year. He thanked elected officials for their strong support for higher education during an unprecedented year.

“Your support really helped us navigate a difficult year,” he told the Missouri House of Representatives subcommittee on appropriations.

Despite the challenges, Choi said faculty, students and staff rose to the challenge to deliver on the university’s mission. He said in order for the institution to continue providing critical education, research and outreach, it’s imperative that the state fully fund the system’s core budget request.

“During the past four years we’ve transformed our university to address the financial challenges,” he said. “We’ve cut nearly $300 million from our budget and eliminated 1,500 administrative positions. That wasn’t easy.”

Choi proposed a budget of $428 million to maintain core funding for the UM System in fiscal year 2022 – with another $10 million for NextGen Precision Health included in the core to continue its mission of improving and saving lives in Missouri. As the top capital priority for the UM System, the NextGen Precision Health building will build on the strengths of researchers from many different disciplines in both the sciences and the humanities.

The fiscal year begins July 1 and ends June 30, 2022. The Missouri State Legislature is expected to adopt the FY 21-22 budget in the coming months.

“We are constantly thinking of new ways to provide value to Missouri,” Choi said.

Among the successes Choi shared with lawmakers was an all-time high graduation rate for all four universities, including graduation rates among African American students and Pell Grant recipients. He said the universities made careful decisions to stay open and provide as many face-to-face classes as possible.

Choi also had an opportunity to highlight the online prowess of the UM universities. During his testimony, he told lawmakers that U.S. News & World Report just released its rankings for 2021 on the best online degree programs in which programs from all four universities were ranked among the best in the nation.

“We’ll continue to achieve excellence so that students get an unmatched education,” he said.

Choi reminded lawmakers that the UM System public universities are the only ones mandated to perform research in Missouri.

“We take this mission seriously,” he said. “Each year, our universities perform more than $450 million in research and development in a variety of fields.”

Among the many research highlights Choi shared with lawmakers was work at Mizzou to create new radiopharmaceuticals to treat breast and prostate cancers – research that is a key component of NextGen.

“When we say we are doing research that saves lives, we mean it,” Choi said. “The goal for NextGen is to accelerate the biomedical advances that we can only promote and produce to improve and save lives right here in Missouri.”

Additionally, Choi said that during the pandemic, Mizzou’s role as a land-grant university has shined through to every region of the state. For example, he said faculty, staff and students produced COVID PPE that were in short supply; supported rural health care needs through more than 1,000 telemedicine visits per day and created mass COVID testing programs for citizens throughout mid-Missouri.

While the UM System universities receive more state support per student than any other university, Choi said, it also is the only university tasked with extra missions of research, extension and engagement.

“We’re asked to do far more, and we deliver,” he said.

Using a model similar to  Tennessee, the actual state dollars per student at the UM System is $3,925, which is not only the lowest in the state, but also the lowest of all flagship research universities in the nation.

“We want to continue our mission,” Choi said. “But it is also very important to support higher education at a level so that we can contribute to the research, teaching and engagement missions.”