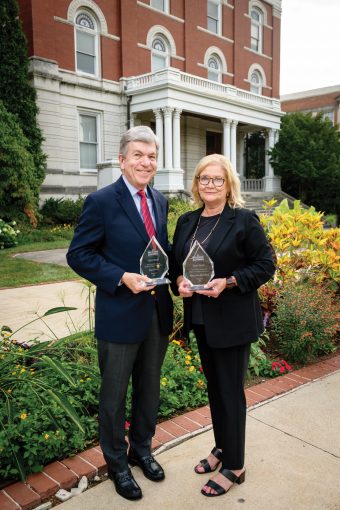 Mary Anne McCollum, BA ’72, BS Ed ’76, and Sen. Roy Blunt’s journeys as education advocates started decades ago: Before entering politics in the early 1970s, Blunt was a high school history teacher, and in 1985, a few months after her election as Columbia’s second ward councilwoman, McCollum became the executive director of the Associated Students of the University of Missouri, a student-led advocacy organization. This year, the Mizzou Alumni Association recognized their longstanding commitment to education in Missouri with Henry S. Geyer Awards for Public Service to Higher Education, awarded annually to one citizen and one elected official.

Elected in 1989 as Columbia’s first — and still only — female mayor, McCollum joined Mizzou’s Division of University Affairs in 2004, where she established the first constituent relations program. After retiring in 2015, she was selected as executive director of the University of Missouri Flagship Council, a private advocacy organization, where she continues to guide the board and lobbyists in Jefferson City on public policies affecting Mizzou.

Blunt, a fifth-generation Missourian and first-generation college student, served as president of his alma mater Southwest Baptist University before being elected to the U.S. House of Representatives. In 2010, he successfully ran for the U.S. Senate. As chair of the Senate Appropriations Subcommittee on Labor, Health and Human Services, and Education, Blunt prioritized college affordability, medical and agriculture research, and extension capabilities. He authored legislation that increased the maximum Pell Grant award, which goes to 125,000 students across the state each year, and has been instrumental in securing federal funding for MU’s priorities, including the Roy Blunt NextGen Precision Health building.