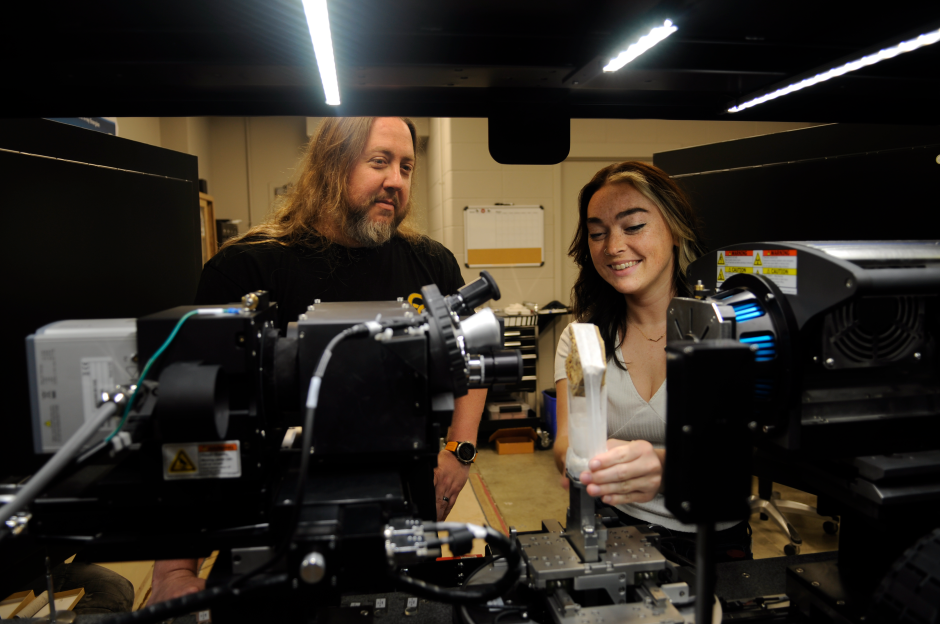 Schiffbauer and Tara Selly, the lab's assistant director and research assistant professor, examine a rock sample that they placed in the X-ray microscope for analysis. The lab is equipped with two primary instruments — a scanning electron microscope (SEM) and an X-ray microscope (micro-CT).

Over the years, James “Jim” Schiffbauer, director of the X-ray Microanalysis Core at the University of Missouri, has seen a variety of items show up for analysis at his lab, such as volcanic rocks, meteorites, fossils, birds, bees and cadaver knees. However, that doesn’t include what he believes to be the next big thing in the future of earth sciences — the analysis of Earth’s critical minerals.

Schiffbauer, who is also an associate professor in the Department of Geological Sciences, said “critical minerals,” which include sources of rare-earth elements and other important elements like cobalt and lithium, have recently become the buzz words for the raw ore materials needed for technology production. He also expects to see the exploration and production of these materials to ramp up in the United States over the next couple of decades as the world’s reliance on technology continues to grow.

“We don't think about it all that often in our daily lives, but things like our cellphones and other types of technology that we use every day have loads of critical minerals that need to be mined in order to build them, such as lithium to make the batteries, gold for microchips, neodymium for the speakers, tantalum for wiring and circuitry, and yttrium for the screens,” said Schiffbauer, who has been directing the lab since its inception in 2017. “These elements are rare on the Earth’s surface, but they are essential to make the technology that we use today.” 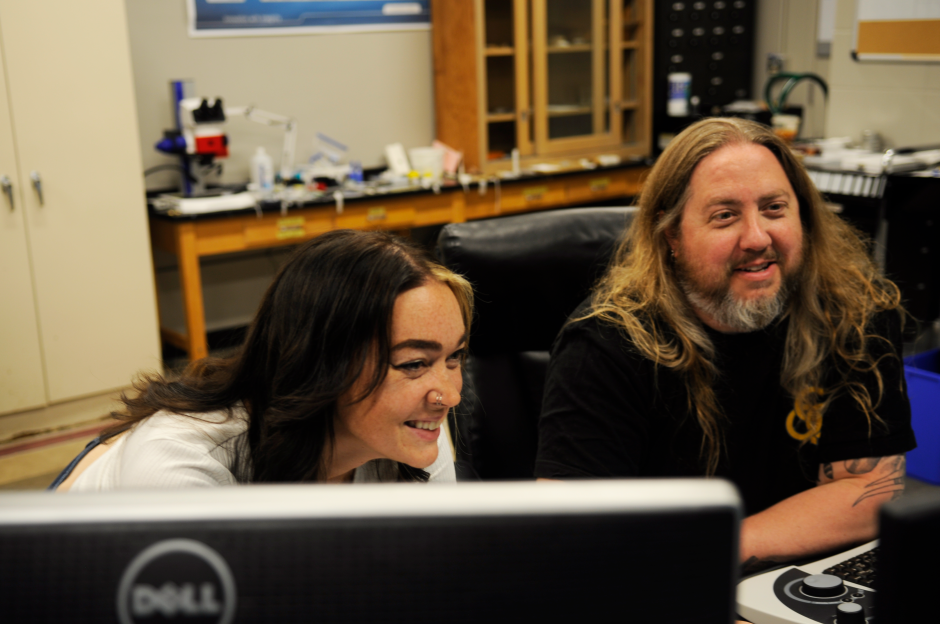 By training, Schiffbauer (right) is a paleontologist, so his research interests are centered around how fossils can help scientists interpret the history of life on Earth.

Schiffbauer’s lab is equipped with two primary instruments — a scanning electron microscope (SEM) and an X-ray microscope (micro-CT). While the SEM would primarily be used for the compositional analysis of critical minerals and the rocks they are hosted in, he said there would be benefits of using the micro-CT as well.

“From our perspective in the lab, we have the capabilities to study and visualize some of these products, such as lithium batteries, but perhaps more importantly from the Earth science perspective, we can analyze the ore minerals themselves — as they exist in the rock,” Schiffbauer said. “For instance, we could look at the spatial distributions of the elements that people want to find in ore rocks, or determine the percentage of the rock that's extractable for whatever targeted element mining companies are interested in. Not only can we do this compositionally at the sub-micron scale with the SEM, but we can also take a core sample from the rock and scan it in the micro–CT, allowing us to see a 3D-view of the inside of that core without destroying it. This type of analytical approach can provide very important data for understanding how critical minerals form, where they form, and ultimately will help economic and ore geologists, mineralogists, and petrologists for widening the search window for minable critical mineral deposits.”

The X-ray Microanalysis Core is one of 15 core facilities on MU’s campus, which provide centralized, shared resources for anyone working at MU, including access to instruments, equipment, technologies and expertise. In addition to cross-campus collaborations at MU, Schiffbauer has formed recent working relationships with researchers at more than 20 other higher education institutions across the globe, including Missouri University of Science and Technology in Rolla, one of the four campuses of the UM System. 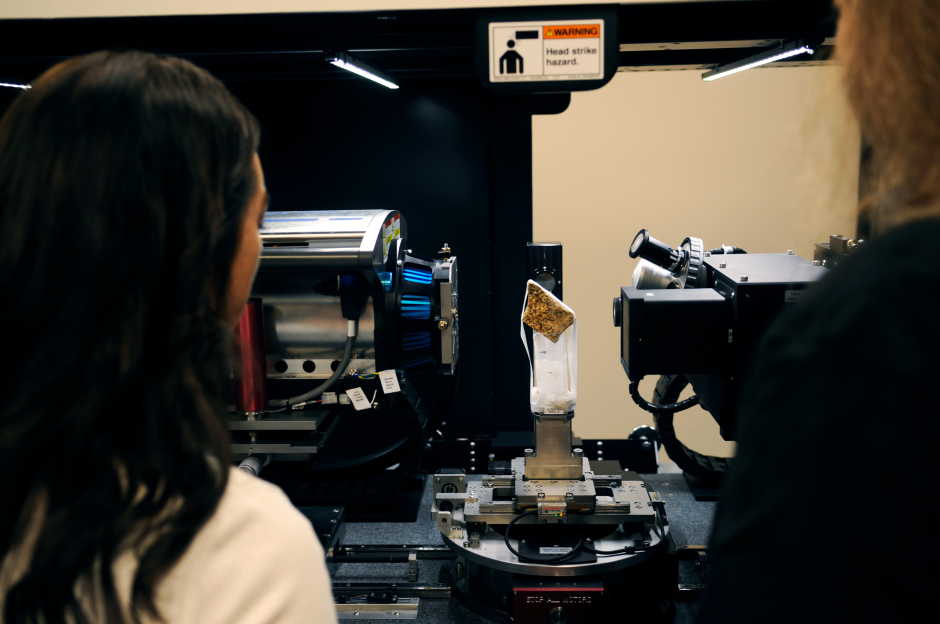 Schiffbauer and Tara Selly, the lab's assistant director and research assistant professor, examine a rock sample that they placed in the X-ray microscope for analysis.

By training, Schiffbauer is a paleontologist, so his research interests are centered around how fossils can help scientists interpret the history of life on Earth. One of his notable projects included developing a three-dimensional image of a 550-million-year-old fossilized digestive tract to better understand the early history of animals on Earth. Schiffbauer also contributed to a recent study led by Alison Olcott at the University of Kansas, which used his analysis of a novel form of preservation for fossilized spiders.

“What we found when we were looking really closely at these spider fossils is that they're absolutely covered with a type of microorganism called a diatom,” Schiffbauer said. “Diatoms are a single-celled organism that makes a skeleton out of silica, and it's really cool because effectively what's happening is these spiders are getting covered with diatoms and their diatomaceous ooze, effectively coating them in a glass-like substance which allows for their exceptional preservation.” 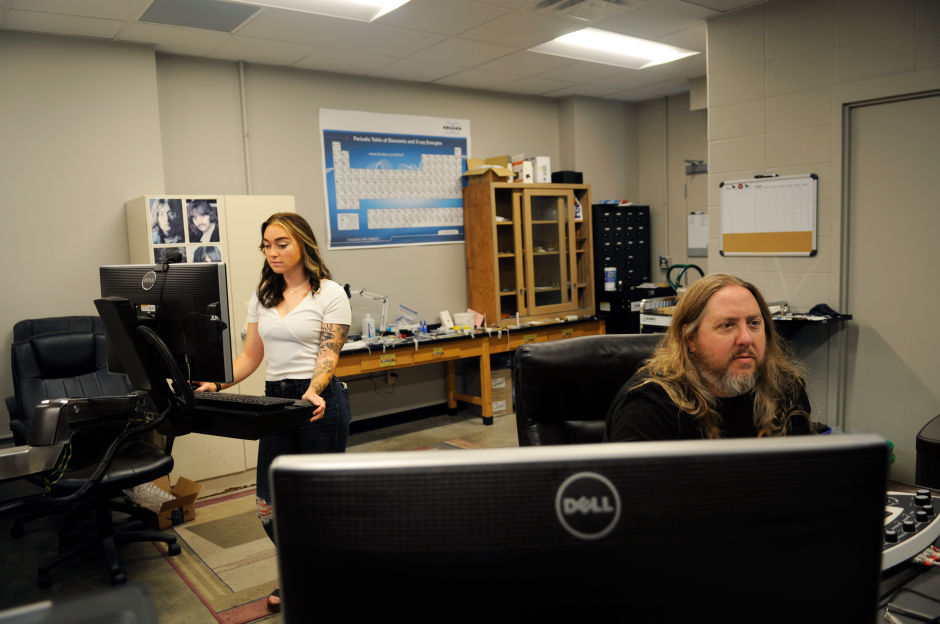 The X-ray Microanalysis Core is one of 15 core facilities on MU’s campus, which provide centralized, shared resources for anyone working at MU, including access to instruments, equipment, technologies and expertise.

Schiffbauer said his lab’s ability to provide views down to the level of a single micron— or 1/25,000 of an inch — and below was key to this discovery of the unexpected preservation of these spider fossils. He believes this particular discovery could also open the door for further identification of different types of environments that are conducive to preserving this type of novel fossil.

“Honestly, this kind of work was the reason I configured the SEM the way I did — the suite of detectors, the spectrometers, the base platform — everything was thinking forward to projects like this, even if I wasn’t thinking about these exact fossils,” Schiffbauer said. “I think that my lab is starting to get known for this kind of work around the country, and people are sending me more fossils to analyze, which is good for the business of building our reputation not only across campus but also at other academic institutions.”

The work of Schiffbauer and his lab are another example of MizzouForward, a transformative, $1.5 billion long-term investment strategy in the continued research excellence of MU. Over the next 10 years, MizzouForward will use existing and new resources to recruit up to 150 new tenure and tenure-track faculty to address some of society’s greatest challenges. Investments will also enhance staff to support the research mission, build and upgrade research facilities and instruments, augment support for student academic success, and retain faculty and staff through additional salary support.