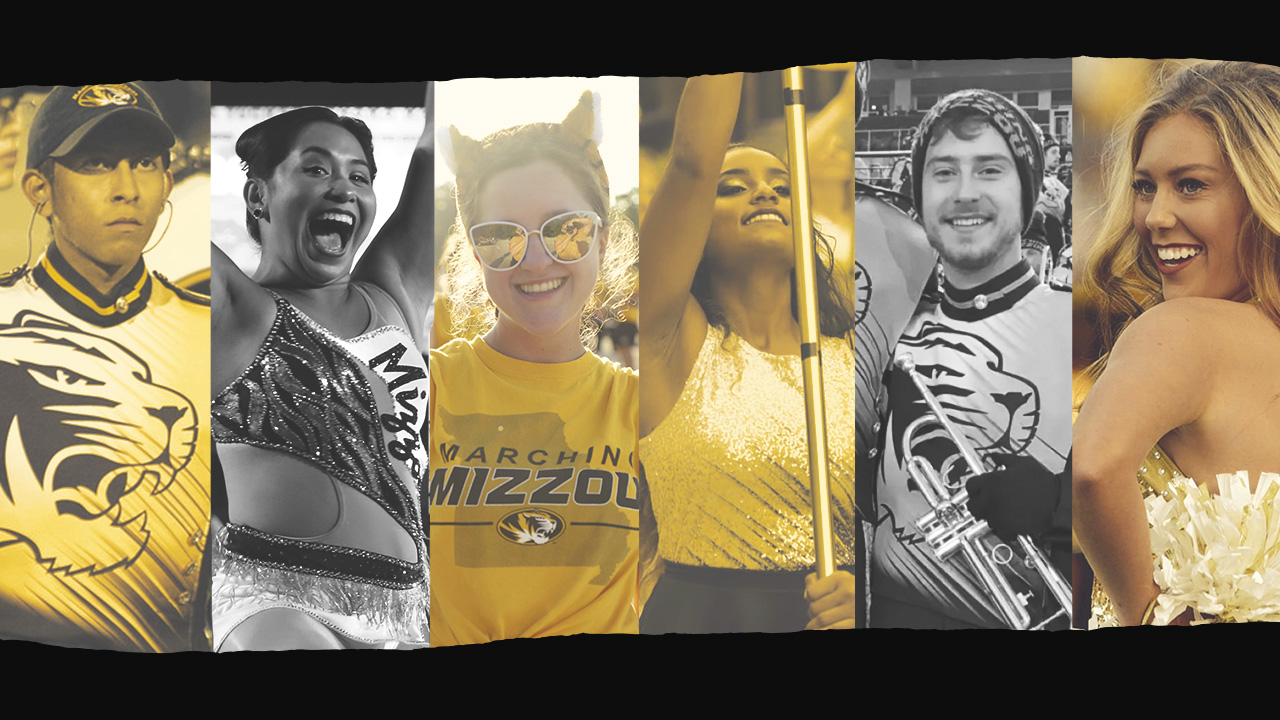 Inside the world of collegiate marching bands, an appearance in the Macy’s Thanksgiving Day Parade is a bucket list performance that holds a special place in the hearts and minds of many young musicians. In November, the 350 students of Marching Mizzou will check this dream off their lists as they step onto the streets of New York City.

This will be the ensemble’s first appearance in the long-standing Thanksgiving tradition, and members are eager to represent MU and the state of Missouri on the national stage. And to keep the band, drumline, feature twirlers, color guard and Golden Girls looking and sounding their best, Marching Mizzou depends on the guidance of its student leaders.

As one of the largest student organizations at the University of Missouri, Marching Mizzou is proof that it truly takes a (tiger) village. Here are some of the student leaders who will help direct their bandmates through the streets of New York City as they take on their biggest performance yet — the 2022 Macy’s Thanksgiving Day Parade. 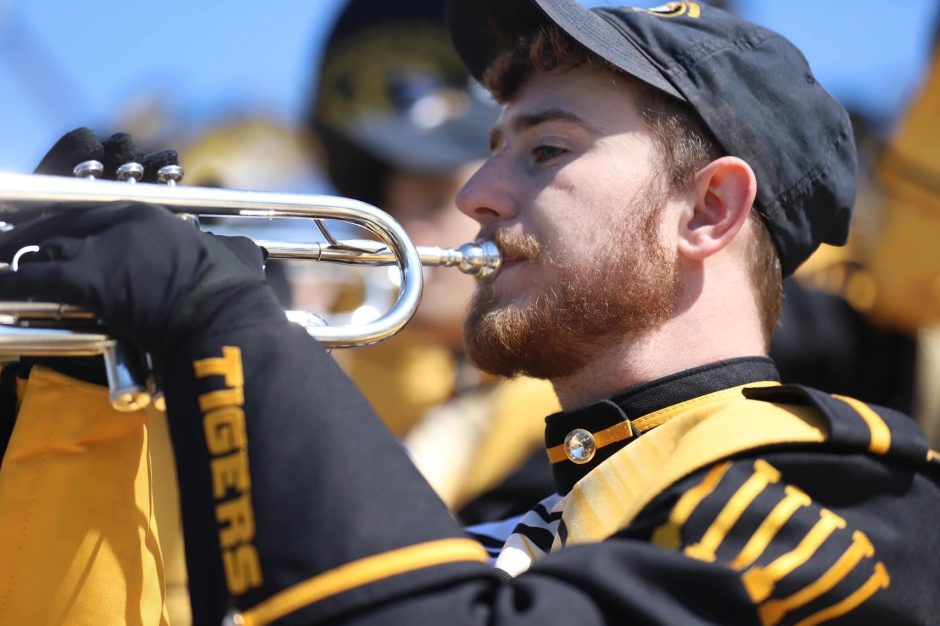 For Cooper Barnes, taking a music class began as a way to fulfill a credit requirement in middle school. Today, as a rising college senior, playing music accomplishes so much more in his life.

Soon after enrolling in a sixth-grade band class, Barnes fell in love with the art of music. But it was the combination of his passions of music and movement that led him down the path of marching band.

“I’m a really athletic person — I like to get up and move,” Barnes said. “Being out on the field with the marching band, I get to pursue my passion while also being active.”

Barnes is one of the brass instrument section leaders of Marching Mizzou. This part of the marching band features instruments such as baritones, mellophones, trombones, sousaphones and Barnes’ section — the trumpets.

According to Barnes, the brass instruments bring a bold and triumphant sound to a composition. For him, this gives him an emotional feeling rooted in nostalgia.

“For me, every time I listen to a strong brass section in a marching band, it makes me emotional,” Barnes said. “It reminds me of being in middle school and watching professional marching band performances and being awestruck at the utter wall of sound a brass section can produce.”

In November, Barnes will strive to produce the strong brass sound he loves as he hits the streets of New York City with his fellow musicians in Marching Mizzou.

In addition to the performance, Barnes is looking forward to seeing the Big Apple for the first time because for him, it represents a way of life that differs vastly from the one he grew up in.

“Growing up, I never really traveled much,” Barnes said. “Of course, I’ve seen NYC on TV and the media, but I am truly excited to see how people there go about their daily lives.” 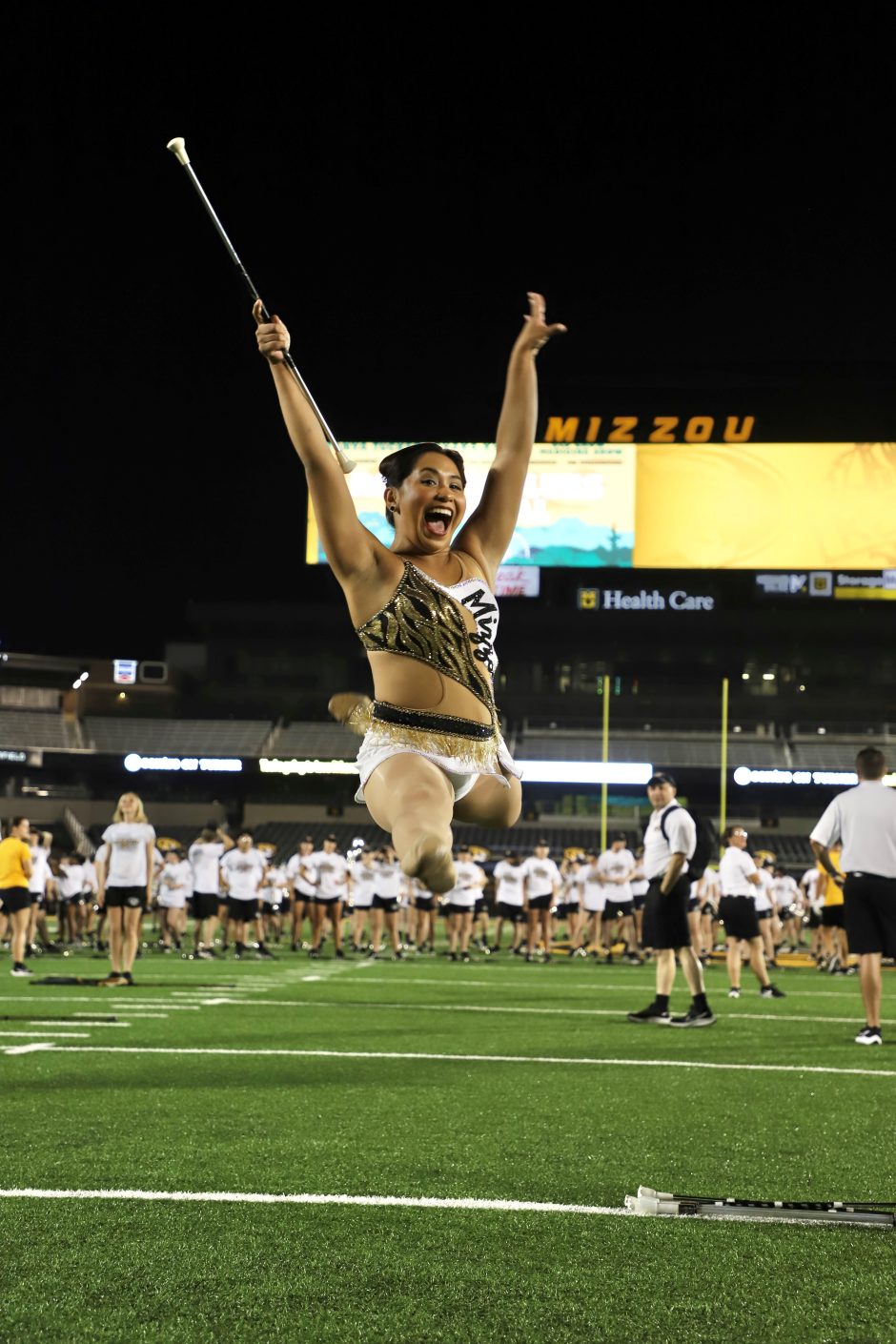 Carlee Fenton, a rising senior, is one of four feature twirlers at MU.

Following in her mother’s footsteps, Fenton began twirling at a young age and was competing by age six. Fenton may have inherited her love of twirling from her mother, but she was equally influenced by her twirling coach.

It was her coach — who has now taught two generations of Fenton twirlers — who inspired Fenton to perform at a large university alongside a marching band.

“All of my coaches have either twirled or been a Golden Girl at Mizzou,” Fenton said. “I have always looked up to and been inspired by them.”

Though performing at the collegiate level was always a dream, during her senior year of high school, Fenton decided to quit twirling. But when given the opportunity to audition to be a feature twirler at MU, Fenton picked up her baton again.

“We had to rush and submit everything last minute,” Fenton said. “But I got the position, and ever since then, it has been great and one of the best decisions I think I have ever made.”

Now, four years later, Fenton is taking her baton all the way to New York City.

Fenton has distinct memories of the parade playing in the background of her families Thanksgiving gatherings.

“At our grandmothers, each family member had their own tasks — cooking, setting the table, etc.,” Fenton said. “I remember the parade always being on in the background.”

This year, Fenton will make new Thanksgiving memories alongside her fellow twirlers, her coach and her mother. 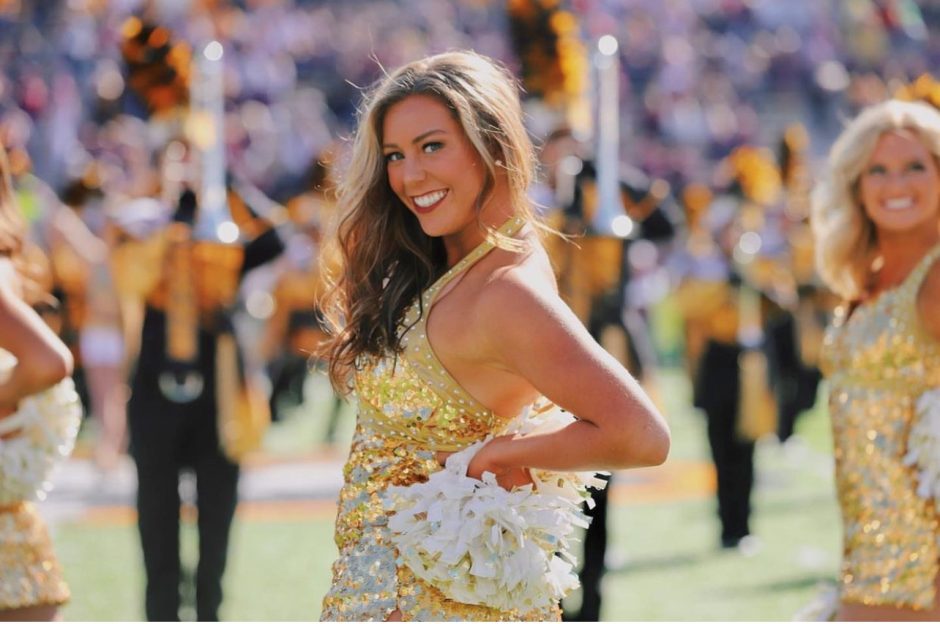 Ever since she was a young girl, Kinnedy May, a rising senior, has been two things: a dancer and an MU tiger.

Growing up in Kansas City with a Tiger football alum for a dad, weekend trips in the fall to Columbia for game day were a family tradition.

“I bleed black and gold at heart,” May said.

Following in her mother’s footsteps, May also took up dance at a young age.

“I tried out a few other things, but I always stuck with dance,” May said.

Now, entering her fourth year at MU, May stands in the coveted spot of her girlhood dreams —the Mizzou Golden Girls. Furthermore, she claims that spot as captain.

“I have loved all four years of it,” May said. “I have been able to live out my little girl fantasy of being a Mizzou Golden Girl and be an ambassador for the university.”

Since their formation in 1957, the Mizzou Golden Girls have been a symbol of Tiger spirit. From their iconic gold dresses to their performances of classics like “Eye of the Tiger,” the Golden Girls are woven into MU tradition.

But for its members, the dance group symbolizes much more.

“Since the beginning, Golden Girls has been built by a group of women,” May said. “We bring out confidence in each other and a kind of womanly power — that is what we represent.” 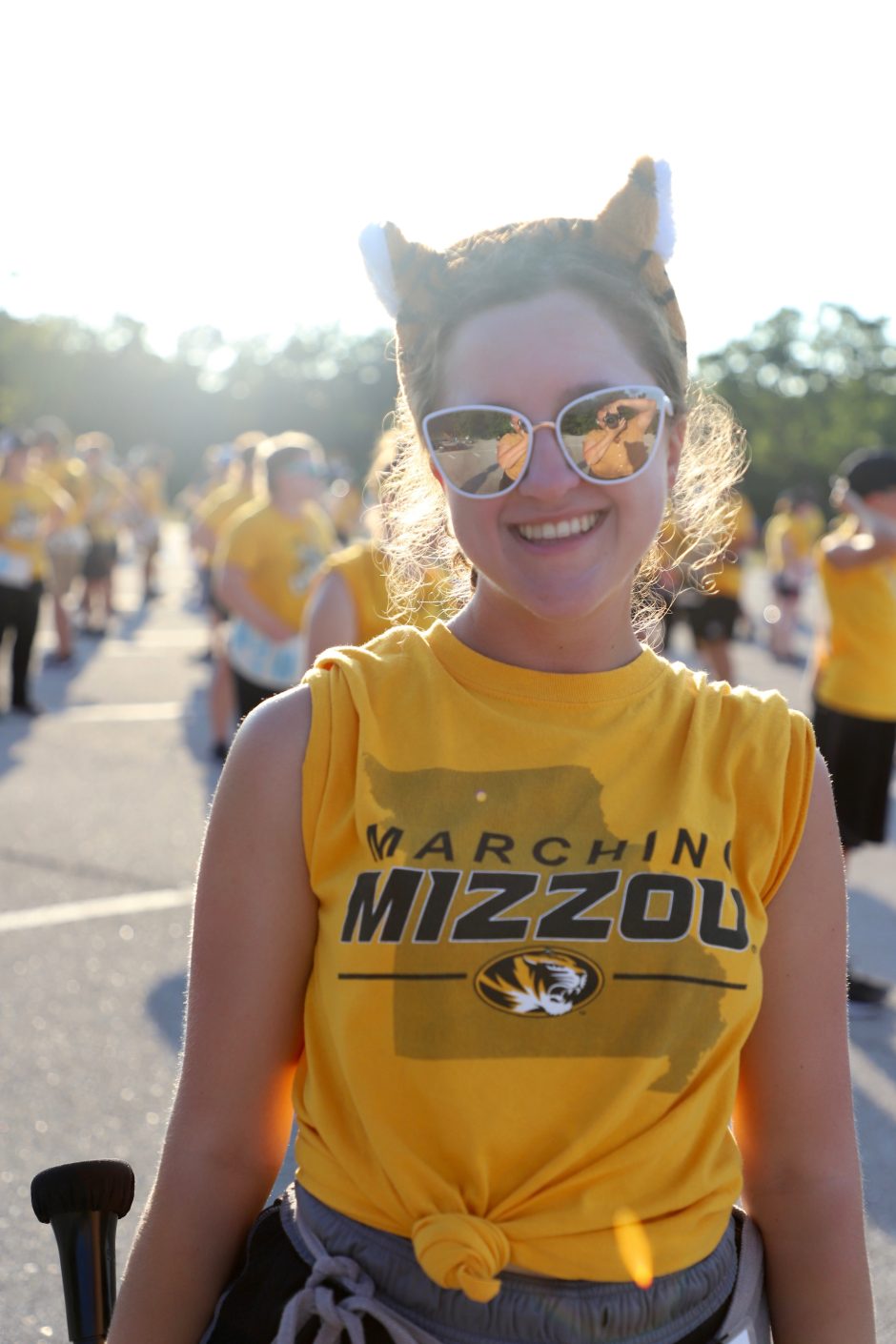 Joy Mazur’s path to marching band began with Hannah Montana and Taylor Swift. Watching them on television as a young girl, Mazur instantly fell in love with music.

First, Mazur took guitar lessons. But it was in fifth grade, when she and her classmates had the chance to try out a variety of band and orchestral instruments that her interest in music broadened.

Since then, through middle school, high school and now entering her senior year at Mizzou, Mazur has always been a band kid. She loves music, but she also enjoys playing a musical instrument alongside her close friends.

“Making music with people I love is always a great time,” Mazur said. “Some of my best friends are ones I met in band.”

This year, Mazur is one of the woodwind section leaders of Marching Mizzou. This part of the marching band features mostly wooden reed instruments like the tenor saxophone, the alto saxophone, and Mazur’s instrument, the clarinet.

“I love playing it,” Mazur said. “It has a rich sound and a wide range, so it can play very low or very high. Overall, it has this amazing depth to it.”

Mazur’s goal as a student leader in Marching Mizzou, is to provide others with the welcoming environment marching band gave to her.

“I want to create that space for other people,” Mazur said. “A place where you can do something you love, make great friends and be yourself.” 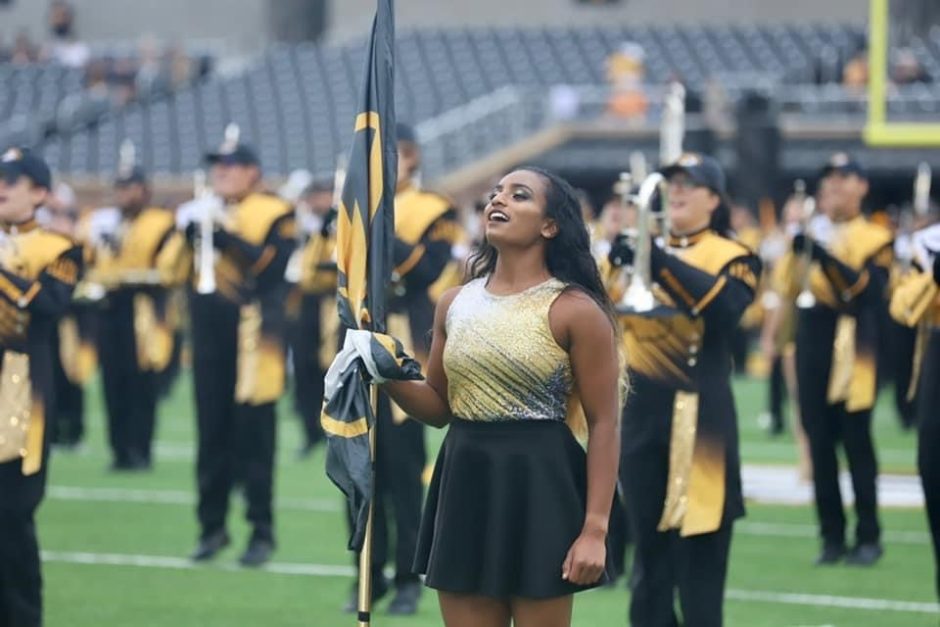 Sneha Reddy, a rising senior, is one of four section leaders of Marching Mizzou’s Color Guard. In November, Reddy will lead her fellow teammates down the streets of New York City, continuing a journey that started with a dance class she took as a child.

At first, Reddy wasn’t thrilled about joining a dance class. Her feelings quickly changed when she discovered her love for performative storytelling.

“What I love about performing is that you are able to tell a story without speaking,” Reddy said. “You instead tell your story though choreography and emoting.”

This love carried into Reddy’s career as a Color Guard member and section leader, where it was ultimately paired with another passion: teaching.

Part of Reddy’s job as a Color Guard section leader, a role she has held since her sophomore year, is teaching her group choreography. The reward for this hard work is the lightbulb moments for her teammates.

“The coolest thing for me is that moment when the person I am teaching finally gets it,” Reddy said.

Her leadership experience has impacted Reddy’s life both on and off the field. The interpersonal skills she has developed as a section leader have helped her deal with her introverted personality in social situations.

“To be a leader, you have to be comfortable stepping up and speaking your mind,” Reddy said. “This has definitely helped me come out my shell.”

All in all, Reddy attributes lessons of discipline and sociability to her time on the field and urges any high school students concerned about doing color guard in college, to go for it.

“There is always time for what you love,” Reddy said. 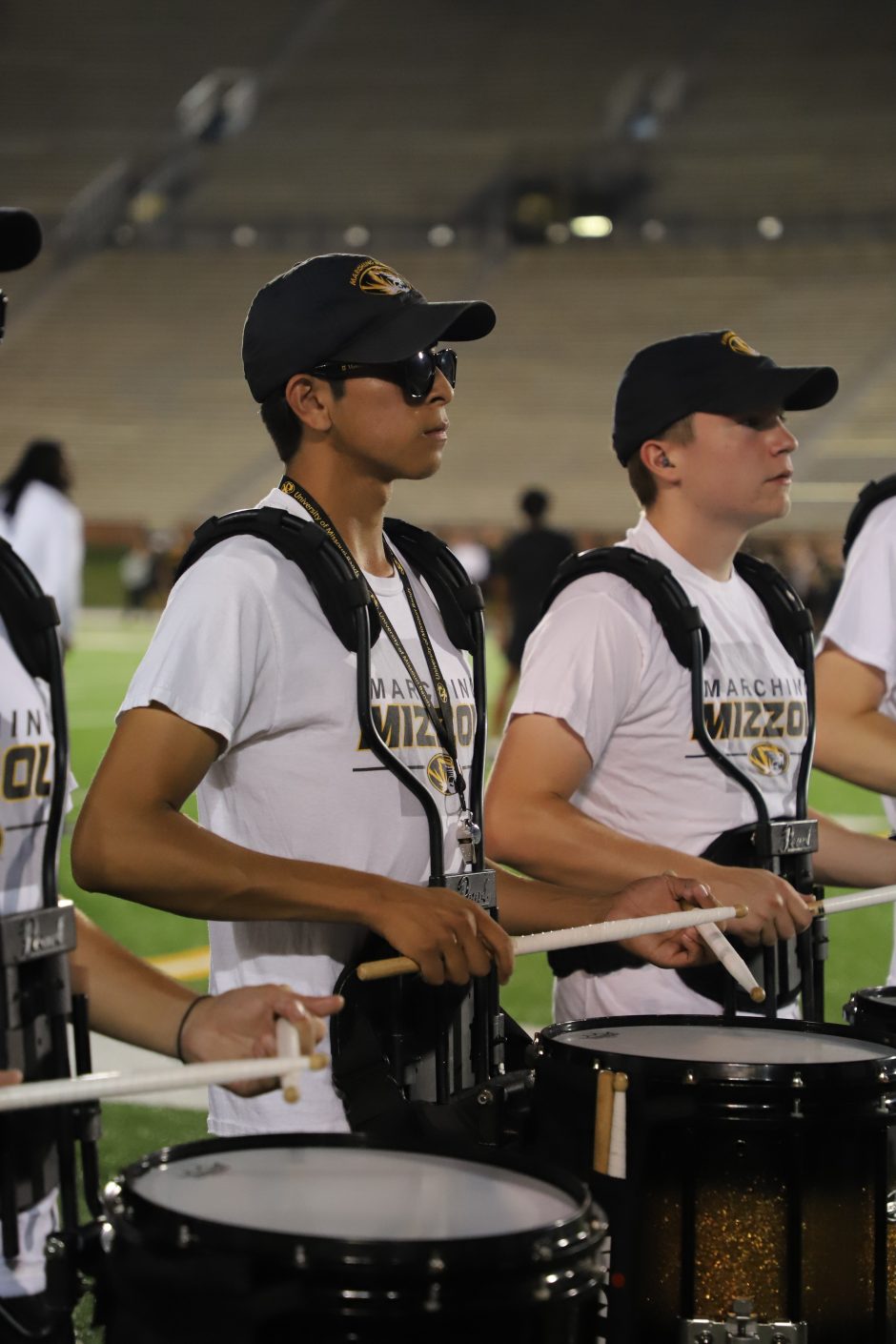 Love for music runs in the Rivera family. So, it was no surprise when Isaac Rivera, a rising sophomore, begged his mother for drum lessons at the age of 13.

Since then, Rivera has played for his middle school, high school and now collegiate band. Along the way, he has made lifelong friends and learned lifelong lessons.

“Being in a marching band has taught me that holding yourself accountable will take you a long way,” Rivera said. “But it has always showed me that your successes aren't all that great unless your friends are there with you.”

Rivera also comes from a military family, which he cites as part of his motivation for stepping up to earn a leadership position in Marching Mizzou’s Drumline.

“Both my dad and brothers spent time in the military,” Rivera said. “Because of this I've always been encouraged to seek excellence in all aspects of my life and have always gravitated towards leadership positions.”

Rivera is the snare drum section leader, also known in marching bands as the center snare. On the field, Rivera is responsible for tapping off the drumline, or creating the tempo for the rest of the drumline to follow. Off the field, he’s a role model to his fellow teammates.

As the center snare, Rivera will take center stage in November as he leads his section of the drumline through the streets of New York City. When Marching Mizzou’s invitation was first announced on April 10, Rivera assumed it was a joke because the news came shortly after April Fools’ Day.

“The first thing I did was check the date to make sure it wasn't April 1,” Rivera said. “After that, I felt a huge wave of excitement wash over me.”

This story was written by one of the News Bureau’s student writers, Samantha Novak.