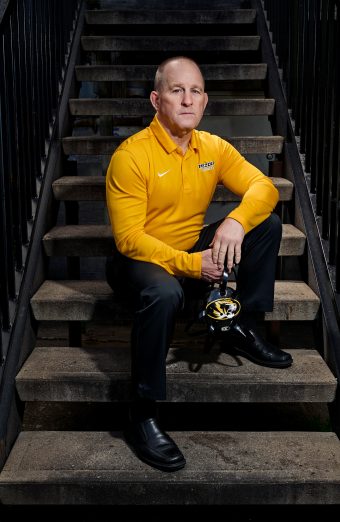 On the west side of the Hearnes Center, an elevator built so that people could effortlessly ascend to the fourth-floor home of the Mizzou wrestling team seldom does so. Days pass without anyone pushing the No. 4 button.

Coach Brian Smith has been taking the stairs for 25 years. So have his assistant coaches and athletes. He doesn’t even have to tell the newcomers anymore. The culture he calls “Tiger Style” speaks for itself.

“One of the guys was sprinting by me on the stairs the other day, and I said, ‘You’re running the stairs?’ He said, ‘Every day, Coach. I’m running them, not walking them.’ That’s what happens. It evolves into people doing a little bit more,” Smith says.

Before Smith arrived in 1998 as a 32-year-old coach with modest credentials, Missouri had never won a wrestling conference title nor produced an individual national champion. With Smith, the Tigers have won 11 straight conference titles — in the Big 12, the Mid-American Conference and the Big 12 again — and nine individual national titles. Two of his wrestlers, Ben Askren and J’den Cox, won multiple NCAA titles and represented the USA in the Olympics.

The Tigers have finished as high as third in the team standings at the NCAA Championships, and Smith isn’t shy about his goal to capture the school’s first national title in any sport since the indoor track team did it in 1965. He built this unlikely wrestling powerhouse with a culture that scorns the easy way out, whether that be a skipped class, a cut corner during a warmup lap or an elevator ride to the fourth floor.

All those extra steps add up, and they eventually lead to the top.

“It’s like JFK said about going to the moon: We do it not because it’s easy but because it’s hard,” Smith says. “We’ve won every possible tournament there is in college wrestling except the NCAAs. We have an opportunity to win a national title. And when it happens, it will be a special day.”