The nation’s citizens will celebrate Memorial Day on the last Monday in May and as they do, many will reflect on the significance of this day and remember those who gave their lives to protect the freedoms foundational to this nation.

“Our debt to the heroic men and valiant women in the service of our country can never be repaid,” said President Harry S. Truman in an April 1945 address to Congress. “They have earned our undying gratitude. America will never forget their sacrifices.”

The University of Missouri has long recognized the sacrifice of Missourians who died fighting for their country. In 1926, the tower of Memorial Union was dedicated to 117 “heroic sons of Missouri who in the Great War [World War I] paid the full measure of devotion.” Today, in addition to those from World War I, the edifice recognizes 340 MU students lost during World War II, as well as nearly 2,500 Missouri men and women who lost their lives during the Spanish-American War, Korean War, Vietnam War, Desert Storm, Operation Iraqi Freedom and in Afghanistan. Among these names are 25 highlighted in white, signifying faculty, staff or students.

The memorial has special meaning for Robert Ross, director of the MU Student Veterans Resource and Support Center and retired Marine Corps captain.

“As I make my way to Memorial Student Union each workday, I am inspired knowing that the building is a living testament to many brave Americans who made the ultimate sacrifice to ensure that our country remains free,” he said. “This sacrifice is punctuated a couple of times each year, especially on Memorial Day, when graves of our heroes are decorated with the Stars and Stripes.” 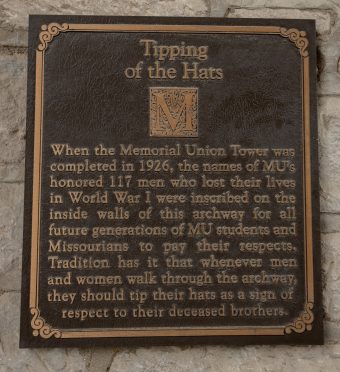 Tipping of the Hats plaque at Memorial Union. Sam O'Keefe/University of Missouri

Originally known as Decoration Day, this day of remembrance originated following the Civil War to honor those who died. In May 1865, just three years after the war ended, General John A. Logan, leader of an organization for Northern Civil War veterans, called for a nationwide day of remembrance. “The 30th of May 1868, is designated for the purpose of strewing with flowers, or otherwise decorating the graves of comrades who died in defense of their country during the late rebellion, and whose bodies now lie in almost every city, village and hamlet churchyard in the land,” he proclaimed.

General James Garfield, who later became the 20th president of the United States, recognized that first occasion with a speech at Arlington National Cemetery and 5,000 participants decorated the graves of the 20,000 Civil War soldiers buried there.

After World War I these tributes expanded to honor all military members who gave their lives in defense of the country. Communities and veteran organizations established local traditions to show their gratitude to those who serve, many of which are still practiced today.

“Memorial Day is especially important as I recall the loved ones and friends that I have lost due to their acts of service. Their courage to face danger and to die for their brothers and sisters in arms deserves acknowledgement,” said Army Lt. Col. Tara Bradley, chair and professor in the Department of Military Science and Leadership.

At Mizzou, one way to acknowledge this sacrifice is the tradition of “tipping of the hats.” When men and women walk through the archway of the Memorial Union arcade, they should tip their hats as a sign of respect to the deceased honored there.

Another tradition, recognized nationally, is the wearing of poppy flowers. This tradition stems from World War I where bright red poppies grew in the early spring of 1915 on the war-ravaged fields of northern France and Belgium. The heartbreak and sacrifice of the time was memorialized in the poem “In Flanders Fields” by Canadian Lt. Col. John McCrae.

Mizzou continues to honor the sacrifices made by Missouri heroes and asks for the public’s help in recognizing those who are not identified on the walls in Memorial Union.

“We would like to highlight the names of all members of the Mizzou community but need your assistance,” the wall reads. “If you have information about an individual whose name should be added to the memorial or who is not designated with a Mizzou affiliation, please fill out the information card provided.”

“Memorial Union is a magnet to student veterans and service members who may someday be called upon to sacrifice all to preserve our freedom,” Ross said. “I am humbled knowing that they will answer that call without hesitation. I encourage all Americans to take a moment on Memorial Day 2022 to honor the sacrifices of our military heroes. Their service will never be forgotten.”