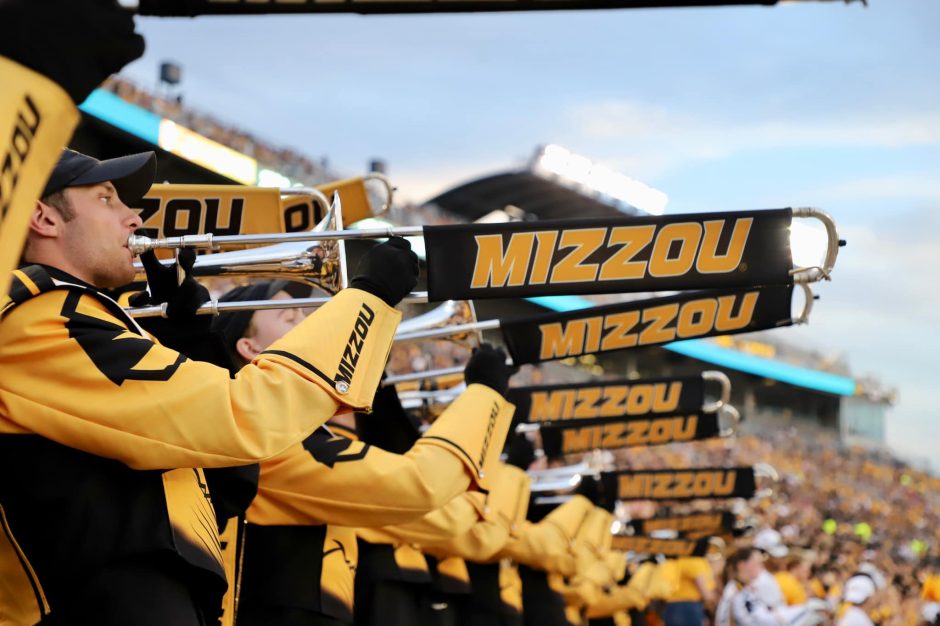 Fans of the Kansas City Chiefs will get to see the 350 members of Marching Mizzou perform at halftime of their home opener for the 2022 NFL season against the Los Angeles Chargers on Sept. 15.

Fans of the Kansas City Chiefs will see black and gold on Thursday night, Sept. 15, at Arrowhead Stadium in Kansas City. But it won’t be the Pittsburgh Steelers on the football field — it will be the 350 members of Marching Mizzou representing the University of Missouri.

Late last month, Kristen Pugh, manager of game and talent entertainment for the Kansas City Chiefs contacted Amy M. Knopps, associate director of bands and director of Marching Mizzou, with an invitation — the Chiefs would like Marching Mizzou to perform at halftime of their home opener for the 2022 NFL season against the Los Angeles Chargers.

We are excited to announce that Marching Mizzou will be performing during halftime at the Kansas City Chiefs Season Home Opener!🏈

The last time Marching Mizzou performed at Arrowhead Stadium was for Monday Night Football in 2017.

“I am thrilled for our students to have earned this coveted invitation,” Knopps said. “It speaks to the history and tradition of excellence patrons have grown to expect from Marching Mizzou. Special memories will be created next Thursday evening, and our students in Marching Mizzou will reflect on the time that they marched at halftime in Arrowhead Stadium this year and hold those memories close to them for years to come.”

Marching Mizzou’s halftime performance at Arrowhead Stadium will be about two minutes shorter than their normal eight-minute routine during halftime at MU football games.

NFL hash marks are 70'9" from the sidelines, which are a difference of 5.75 steps from the college hash marks that Marching Mizzou regularly uses. To prepare for the adjustment, they will tape NFL hashes on their practice field.