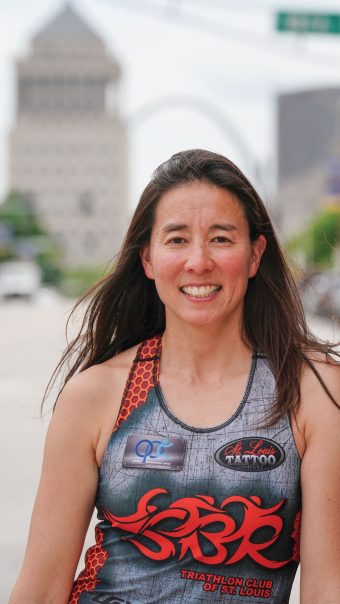 Katrina Pon is recently back from Antarctica, where she ran a marathon in freezing temperatures and 40 mph wind gusts. During her student days at Mizzou, she started running a mile or 3 to get in shape, but things have since escalated: Now 44, she’s run a marathon on all seven continents.

Back in the early 2000s, as Pon, BS Acc, BS BA, M Acc ’99, accompanied a then-boyfriend on runs, she began to wonder what more her body could do. Initially, she trained in isolation: She moved to Toronto for work and didn’t know anyone, so she’d prepare herself and travel to races alone. By 2006, she had completed a half-marathon and a half-Ironman; to date, she has completed nine Ironmans.

Once Pon moved back to St. Louis, she joined a U.S. Masters swim class and a triathlon club. At long last, she had found like-minded, training-focused folks and went on to travel with many of them on “race-cations.”

Fellow racers understand one another in ways nonathletes don’t, Pon says. “I would go out with some of my girlfriends and be tired at 9 p.m. because I had gotten up super early to train. They don’t get why you have to be away eight or nine hours on a weekend. With my triathlon friends, if we have a party, everybody goes to bed early. We have to get up and work out. We eat the same kinds of foods; we’re adventurous A-types.”

She and husband Aaron Hughes, BS HES ’91, often race together. In fact, he proposed to her in Indiana after a half-Ironman. “He carried the ring all through the bike and the run,” she says.

Pon aims to run a half-marathon in each U.S. state before she turns 50 — so far, she’s up to 32. But mostly, she says, “I really could care less about the race. I only sign up for something if my friends are going, too.”