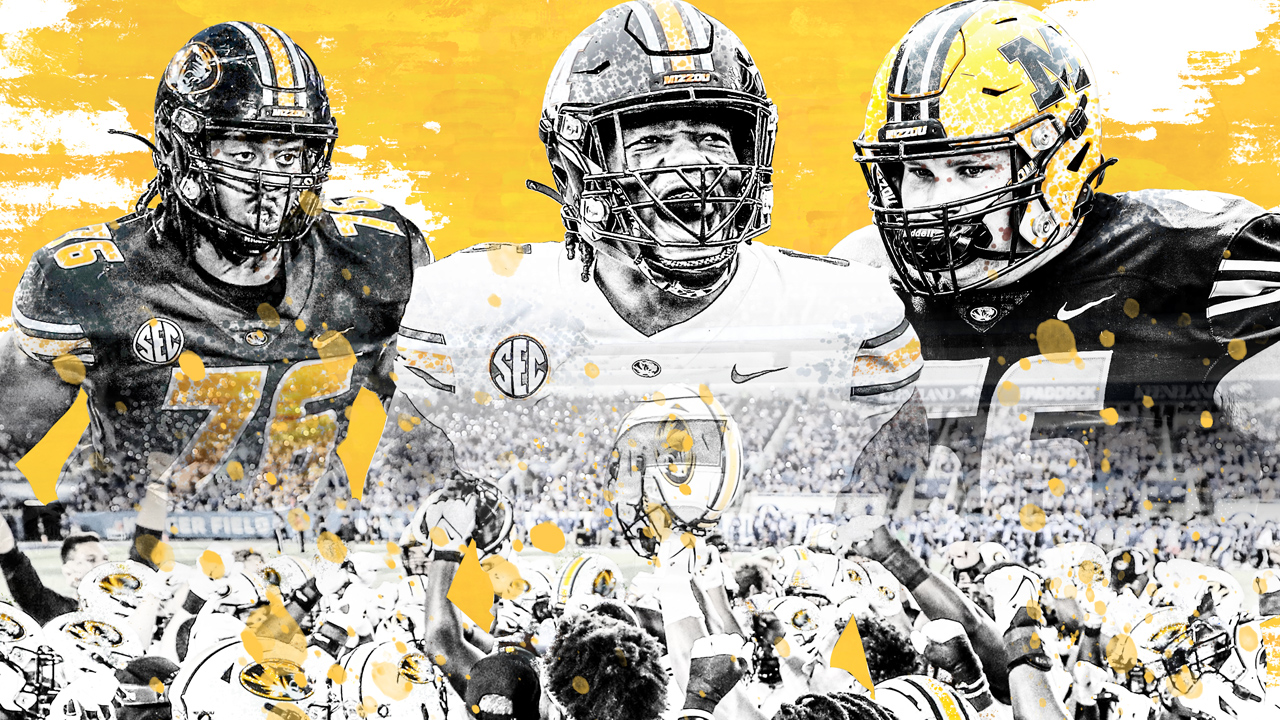 The Tigers believe unity will be the key to success this season.

Last spring, Javon Foster walked into the Missouri football locker room and saw something different in his teammates. The incoming redshirt senior was reporting for his fifth season as a Tiger offensive lineman, and in that half-decade, he had seen players, trainers, coaches and even a head coach come and go. But this time, there was a distinctive feeling, something the veteran had never felt during his time at Mizzou.

“These guys actually want to play for each other and build and become better,” Foster says. “It’s like a brotherhood.”

Jaylon Carlies noticed it, too. “I’ve met a lot of fun people in my time,” says the junior defensive back. “But sometimes it just doesn’t feel like a family in the locker room. This year feels the best in terms of unity.”

Unity in college locker rooms, these days, is more elusive than ever. In 2018, the NCAA introduced the transfer portal, which enables student-athletes to switch schools without having to sit out a year. Whereas previously teams had to assimilate only a handful of transfers along with incoming freshman, now dozens of student-athletes were free to jump from school to school. Last offseason, there were 950 undergrad transfers and 477 graduate transfers in football alone, up from 2020’s 587 and 309, respectively. This offseason, the Tigers welcomed more than a dozen newcomers via the portal and said goodbye to about the same number. With all this year-to-year tumult, it can be difficult to maintain any sort of team culture — much less a positive one.

Any coach will tell you that all the top-down goals, standards and expectations don’t mean much without players who embody those principles on and off the field. “Players have to buy in,” says Head Coach Eli Drinkwitz. “They have to see the value in what we’re preaching. Anytime you’re welcoming in a large number of new players, you need strong locker-room presences to assimilate the group quickly.”

Those strong presences come from players like Foster and Carlies — stalwarts who don’t necessarily get the recognition on game day but who have nonetheless bought into the program, worked hard and emerged as leaders through voice and action. And a football team is a particularly unwieldy body. Comprised of more than 100 players divided and subdivided into various units on offense and defense and special teams, each must function as an individual and also mesh with the larger squad.

Here are some of the 2022 leaders and some of the ways they keep the Tigers working as one. 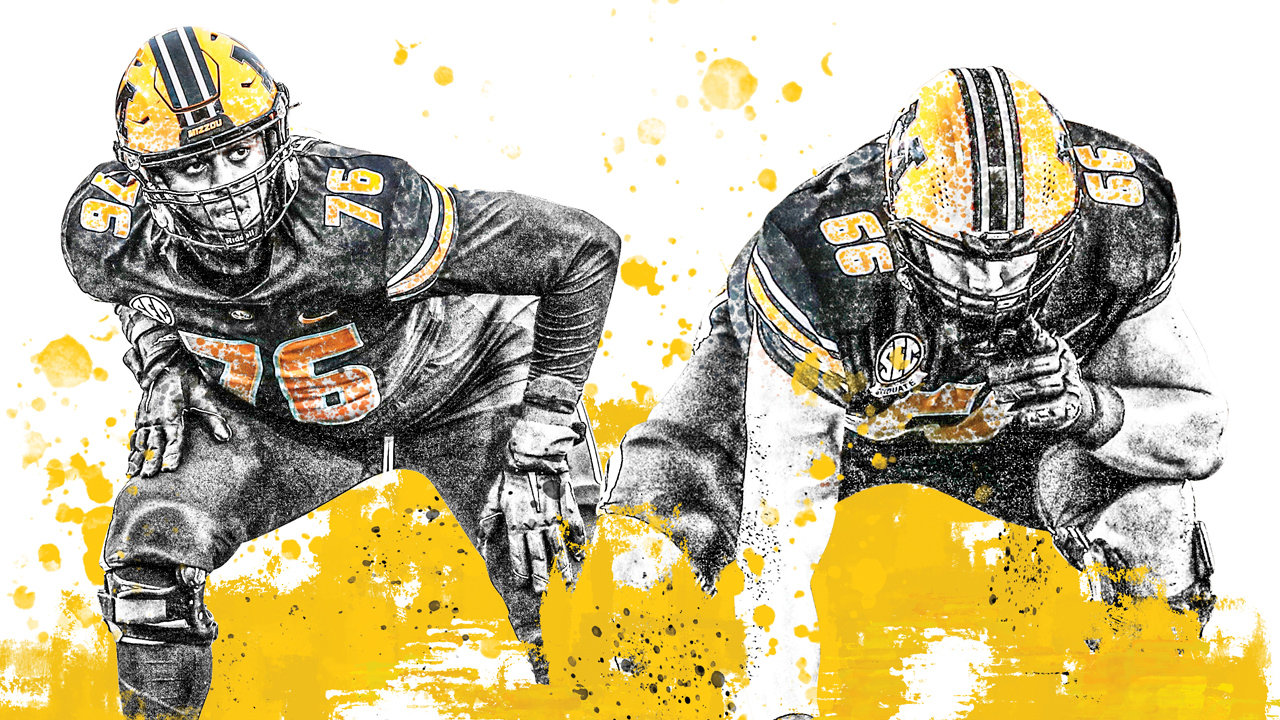 Of all units that comprise a football team, none has to work together as seamlessly as the O-line. Together, the five of them rely on one another to pick up blitzes, block for running schemes and protect the quarterback. “It’s vital that those five guys work in unison, or there’s no chance for the offense to be competitive,” Drinkwitz says.

Since Javon Foster arrived from Detroit in 2018, he’s seen the group go through its share of growing pains. Despite Foster’s quiet demeanor, the All-SEC Honorable Mention, who started every game last year at left tackle, has emerged as a journeyman’s role model.

Foster will line up beside Connor Wood, a grad-student guard who transferred from Montana State in 2020. Despite starting his career elsewhere, Wood has become a vocal leader, whether it’s in the locker room, sitting together at meals on the second floor of the Show Me Club or at a Saturday BBQ at the home of offensive line Coach Marcus Johnson. O-liners, he says, cannot be selfish. Success there requires selfless sacrifice. “We are one.” 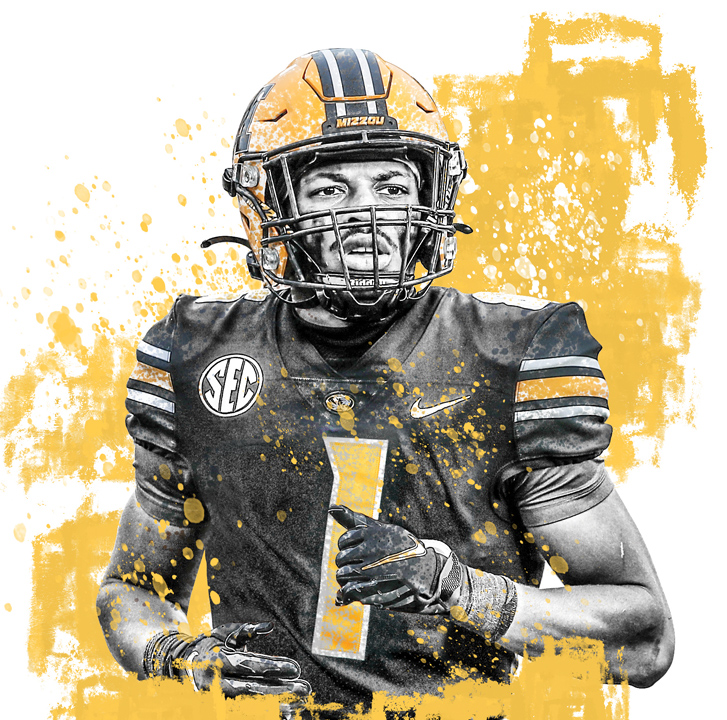 Compared to the relative anonymity of the offensive line, wide receivers often come off as more self-reliant. And when Tauskie Dove arrived in 2018 from Denton, Texas, he was ready to jump right in, start making plays, win games and have fun — until he was benched, redshirting his freshman year.

“It was a reality check,” he says. “There were older guys who were stronger, had been on the field and in the film room. I learned you have to work for your spot and out-compete whoever is in front of you.”

Now a redshirt junior who played in all 13 games last year, Drinkwitz calls Dove “Mr. Dependable,” the veteran who can mentor young receivers like Luther Burden, Mekhi Miller and Ja’Marion Wayne, who are coming in with a lot of media hype. “When I first came, it was about winning and having fun,” Dove says. “But now it’s about brotherhood and bringing the edge every day.” 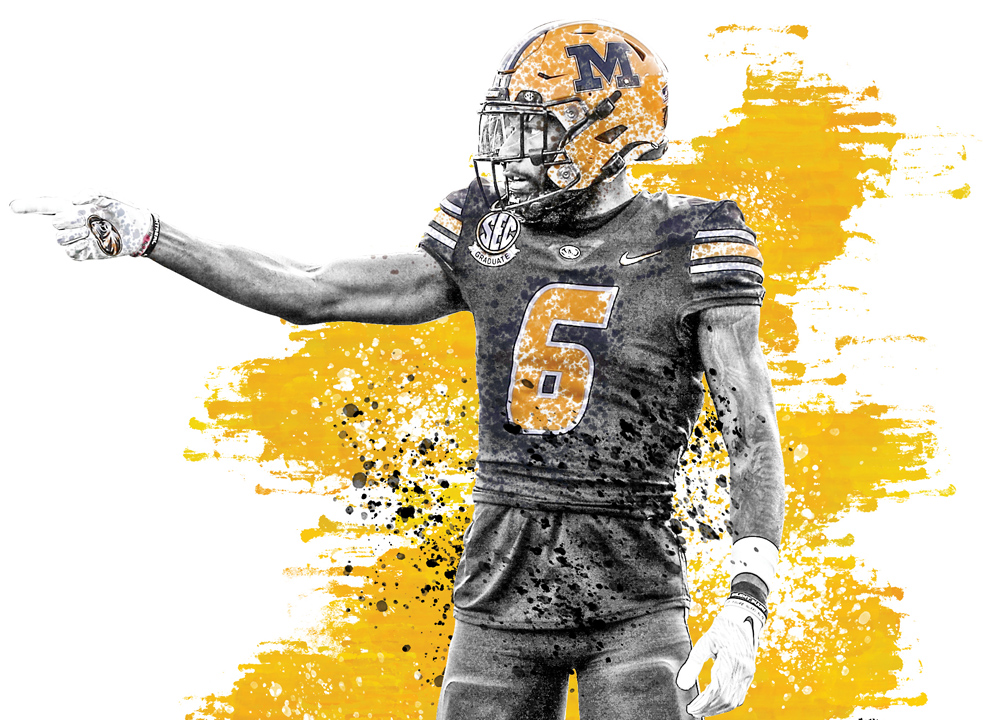 Even though he lines up on the opposite side of the ball, defensive tackle Darius Robinson believes his unit is every bit as in sync as the O-line. And as a true senior from Southfield, Michigan, who has battled through injuries to play all four years at Mizzou, Robinson has taken it upon himself to lead. He does so formally as a delegate to the SEC Student-Athlete Leadership Council and informally as a facilitator of card games, dinners out at Hoss’s and video game sessions.

Robinson says leadership entails holding himself and teammates accountable where it matters most: on the practice field. “We’re out there sweating on those super-hot days, when we don’t think we can get through it,” he says. “We get through it together.” 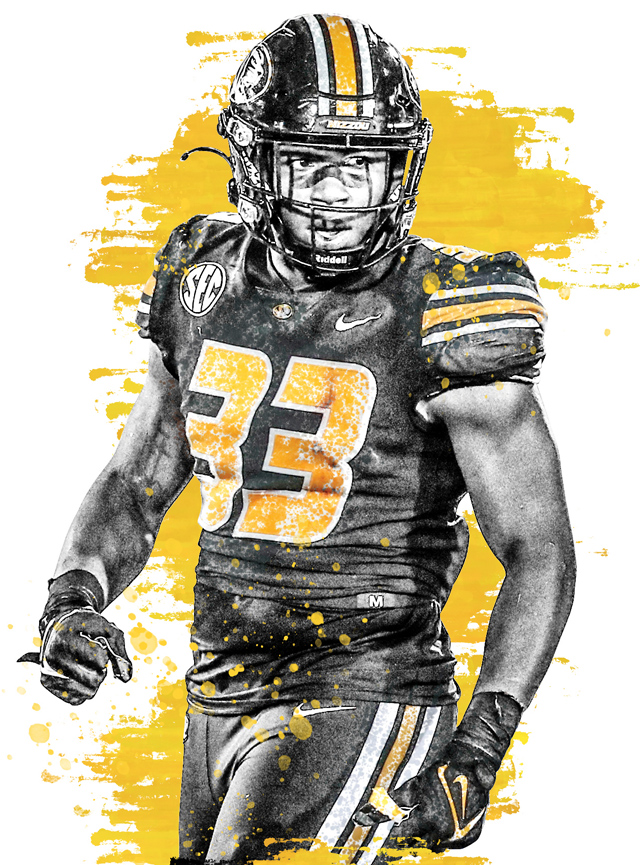 Redshirt senior Chad Bailey has powered through a career plagued with injuries to establish his position as a leader of the linebacking crew in the training room and on the field. He has also drawn on his upbringing to set an example off the field. While raising him in Missouri City, Texas, Bailey’s mother also devoted herself to being a foster parent for children who needed a place to live. Now, Bailey uses his name, image and likeness (NIL) opportunities to sell T-shirts with his face on them to raise money for Coyote Hill, a foster care community that helps children find a home. “He’s a guy who has worked his way into becoming a leader in the locker room and in the community,” Drinkwitz says. (See below for more on NIL.) 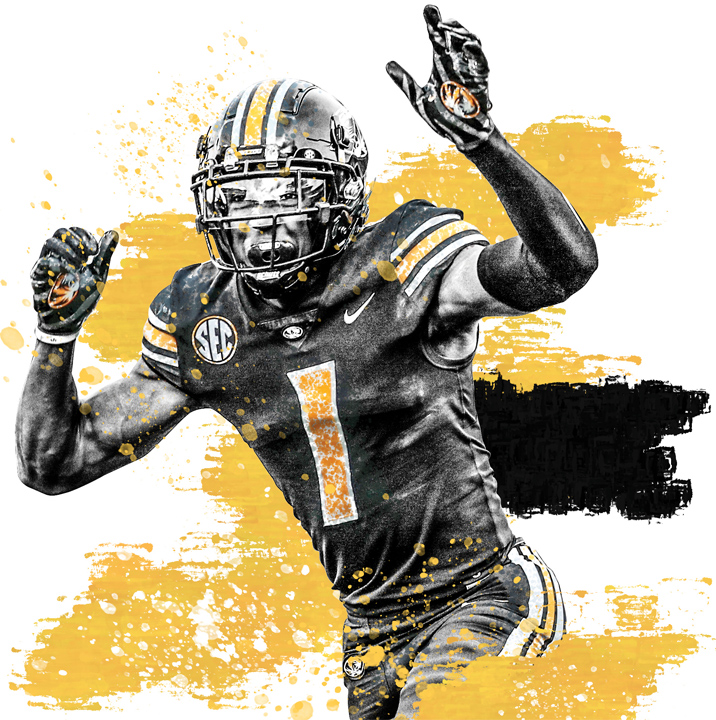 It’s easy to talk about sacrifice for the team. But Jaylon Carlies did more than just talk. Highly recruited out of high school as a wide receiver, he agreed to switch sides of the ball and become a defensive back. And his teammates in that backfield value his example.

“We all trust each other back there,” Carlies says. “We know what we have to do. If you mess up, your teammates got your back.”

The business of recruiting

When it comes to recruiting top high school football talent to Mizzou, particularly that from Missouri, some part of the pitch has always centered on business. Coaches have naturally had to sell MU as a place where a young student-athlete can start a career — whether it’s on the football field or in another walk of life.

But the calculus of recruiting has changed drastically in recent months, bringing money into the equation much earlier in the players’ evolution. That’s because, in 2021, the NCAA instituted a policy enabling college athletes to benefit from use of their name, image and likeness (NIL) on things like commercials, apparel and other endorsements. The state of Missouri followed a month later as one of the first to pass an NIL law (SB 718), and the legislature recently amended the law to allow state institutions to guide student-athletes and help them take advantage of the new opportunities. 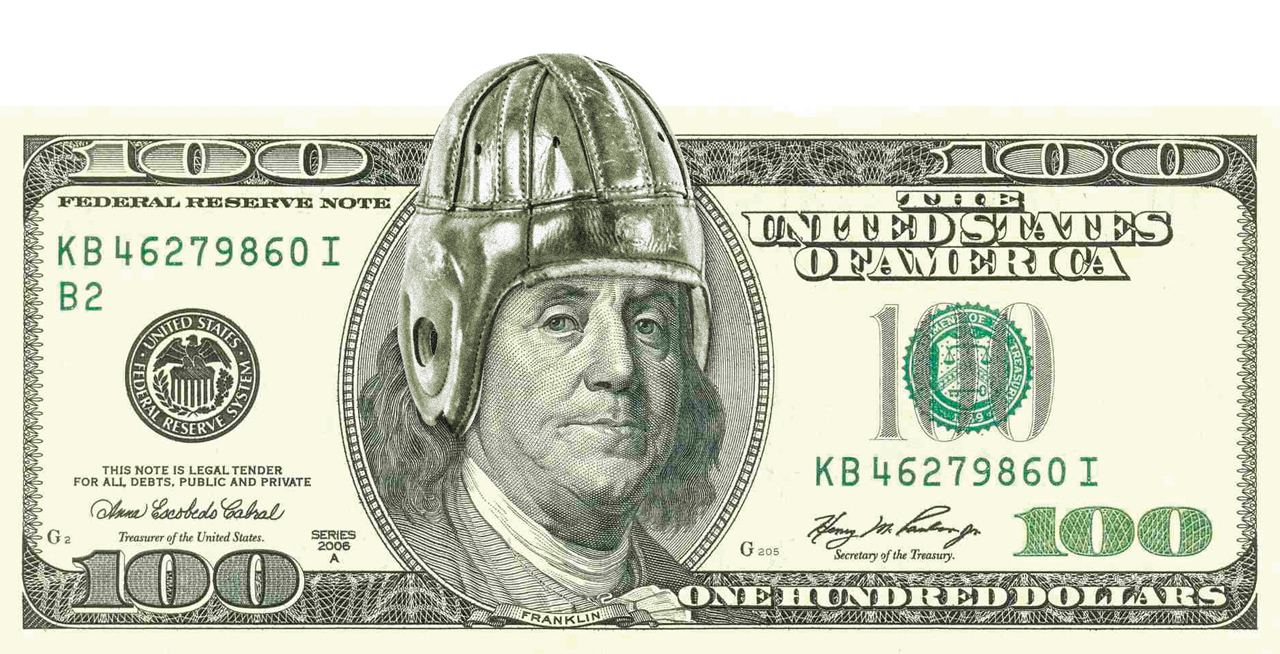 It's NIL about the Benjamins.

At big schools, this means big money — Alabama quarterback Bryce Young has a reported NIL value of more than $3 million — but most students make between $1,000 and $10,000 a year. “Before, recruiting was more about the right fit and development and preparing yourself for an opportunity in the NFL,” says Mizzou football Head Coach Eli Drinkwitz. “Now, it’s about business opportunities that will present themselves right now.”

For instance, Mizzou has already moved forward on projects that will produce Topps and Fanatics trading cards of Tiger athletes and Nike jerseys for current football players, who will receive a portion of the sales. And it’s not all dollar signs for players: There is also an educational component through a collaboration between the athletics department and the academic units of journalism, law and business to train students how to protect and maximize their NIL. Some athletes, such as linebacker Chad Bailey, have already used the opportunity to raise awareness and money for local charities.

Although the quick action of the state and school would seem to give Mizzou a recruiting edge, especially when it comes to other schools in the SEC, Drinkwitz says there is still much work to be done in the NIL arena to make MU more of a destination. There is a broad statewide market, including two top-50 media markets in St. Louis and Kansas City (not to mention Springfield, Columbia and Jefferson City), that could present ample exposure and endorsement opportunities. “If we want to win championships, we have to be one of the best in the country in NIL opportunities for our student-athletes,” Drinkwitz says. “And for a lot of local and statewide companies, now is the time to support MU, not just in football and basketball, but in all sports.”