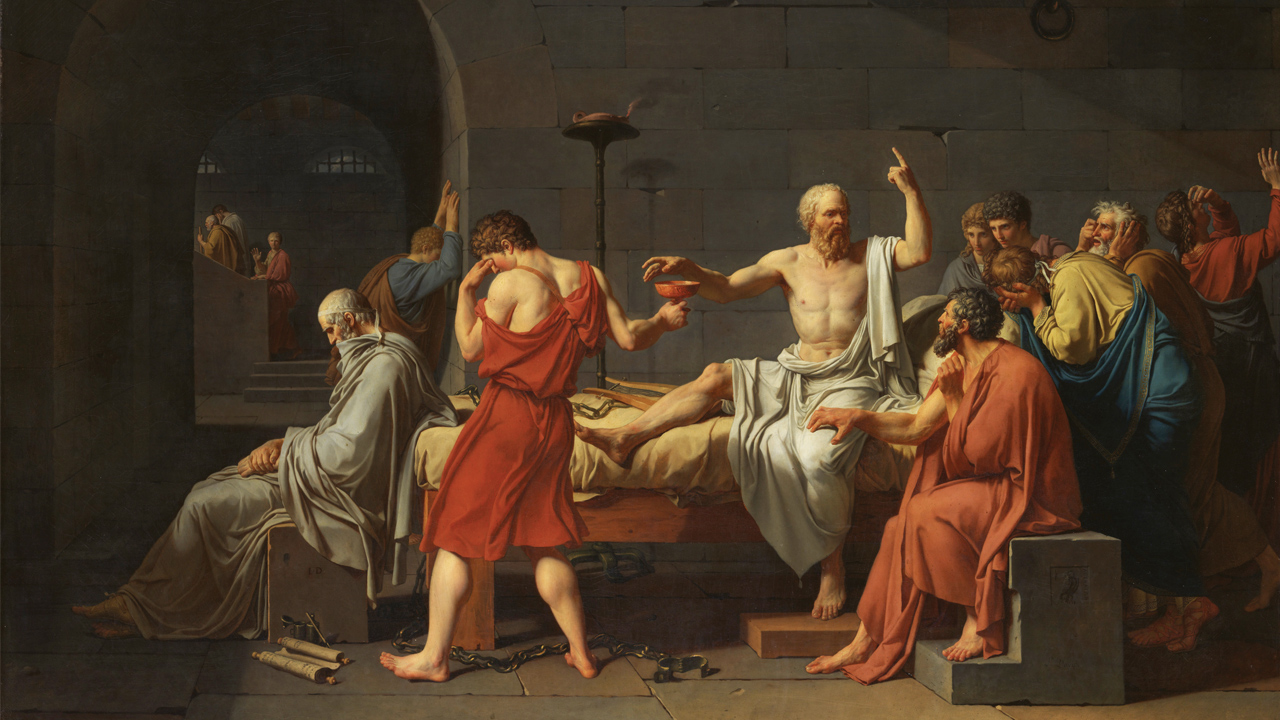 The Death of Socrates, Jacques-Louis David, 1787.

Jacob McIntosh bounds down the stone and grass steps at Traditions Plaza, stops at the bottom of the amphitheater and turns to speak to a gathering of fellow students.

“Good morning,” he says to the hushed crowd. “Today, I am here to defend our democracy … .”

The crowd meets this grandiose statement with a smattering of applause, a few cheers and a couple boos. The mixed response is a preview of the much more heated public debate that will ensue. The crux of the argument is how much responsibility public figures and influencers should bear for the violent criminal actions of their acolytes.

“You all need to understand that young, impressionable people are being led to this man who is spewing some dangerous things,” says Sigi Ris, who majors in journalism and political science.

“But he condemned those very actions,” someone shouts from the crowd.

“Actions speak louder than words,” says Ris, turning up the volume to make herself heard over moans and grumbles. “It doesn’t matter that he condemned the acts, when it still led to our city’s destruction.”

“Your logic does not follow,” says another person from the throng.

“Logical fallacy!” calls yet another.

Students repeatedly shout phrases like “saving our democracy” or “freedom of speech” — topics from today’s newsfeeds. In these politically charged times, this could be a scene from any college campus in America.

Except most of these MU students are wearing bedsheets. 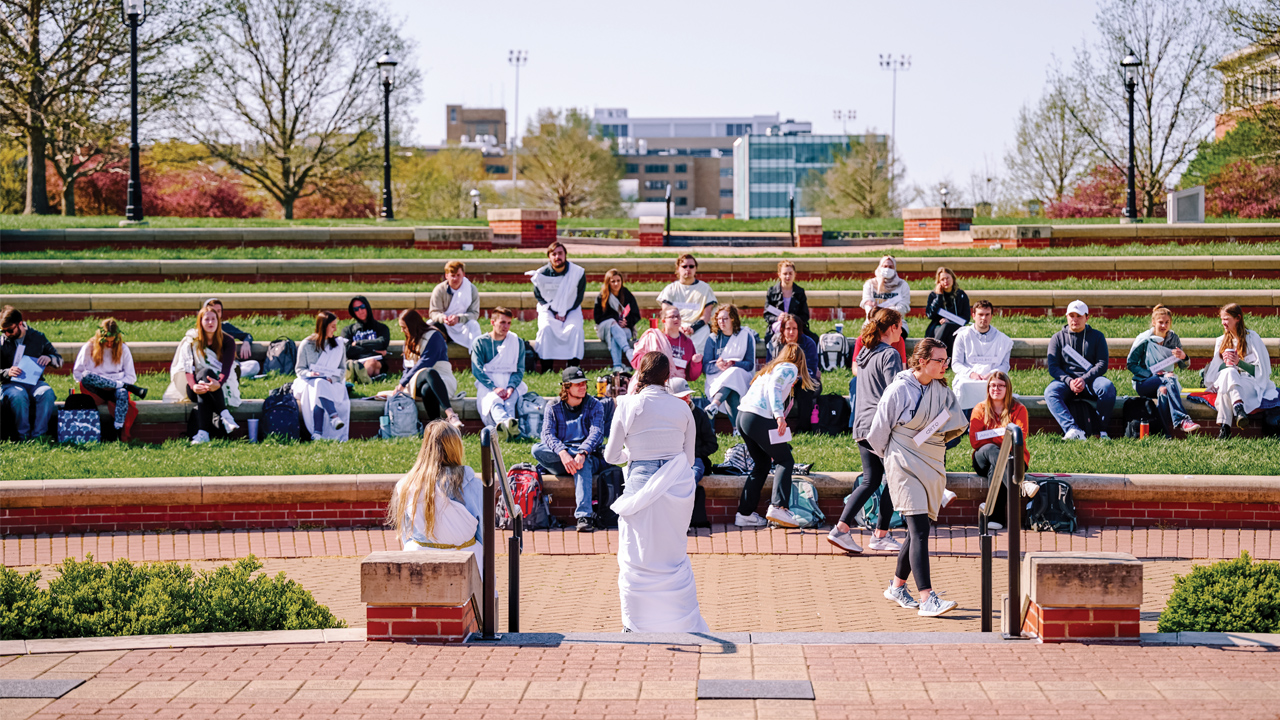 Students in a role-playing class debate the trial of Socrates at Traditions Plaza.

This isn’t a campus demonstration. And it’s not Shakespeare in the Park. The linens are meant to represent chitons, the traditional garb of ancient Greece. Welcome to AMS 2100H: The Ancient Greeks (Honors) — a “gamified” role-playing class.

Built around the game The Threshold of Democracy: Athens in 403 BCE, the semester-long exercise at times transforms the classroom into the ancient city-state during that period of rebellion and instability. Today’s class is a short game, The Trial of Socrates, who has been accused of treason and corrupting youth. Each student has developed their own agenda, based on the character sheet, faction and goal they were assigned at the beginning of the term. The idea is to persuade enough fellow students — through their own words, based on the class readings — to achieve that individual character’s (secret) objective, be that citizenship, election to office or even staying alive. As with any game, the object is to win.

For example, Ris was assigned the character of Anytus, a leader of the Periclean Democrats working to preserve Athenian government by fending off the rise of Socrates’ so-called philosopher kings. She wants to see the defendant convicted by a majority of her peers.

A student speaks up to assail Ris’ logic. “If they were truly led by Socrates’ teachings, they wouldn’t have ended up like that because Socrates spoke out against those actions.”

“It doesn’t matter that he condemned the actions,” Ris responds. “He still mentored them.”

Observing — and grading — all of this from his seat beside the stage is Jim Crozier, assistant professor of classical studies. The idea behind this exercise is neither to recreate history (Spoiler Alert: The real Socrates was convicted and put to death) nor to rewrite it. Crozier wants the students to inhabit that time, place and perspective and to interact with one another in that setting. When it happens, they’ll not only better understand that period of antiquity but also sharpen critical thinking, debate and oratory skills.

“It’s a test of character,” says Crozier, who has been teaching this “reacting” class for two semesters. “Participating is the important thing. That’s why I try to make as many avenues as possible for everyone to get a win. I want to give students an experience they’ll really remember from their time at Mizzou and challenge them to think outside of the box and put themselves in someone else’s shoes. But above all, it should be fun. 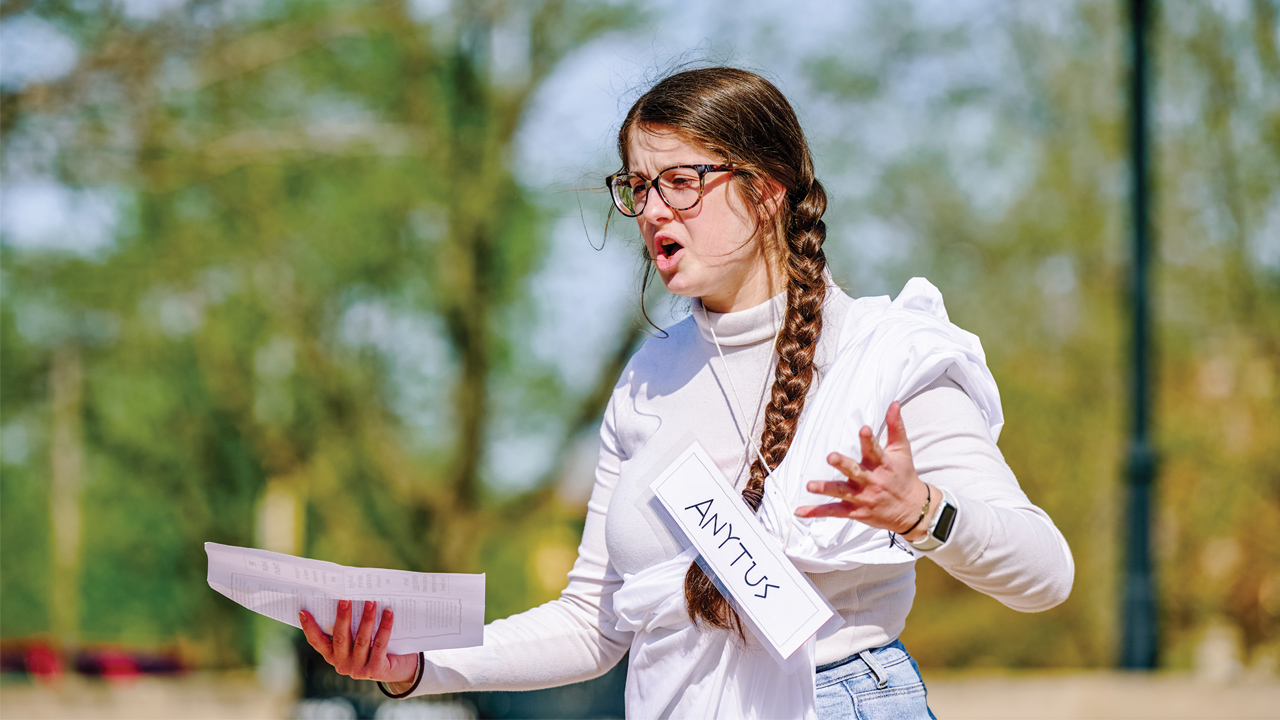 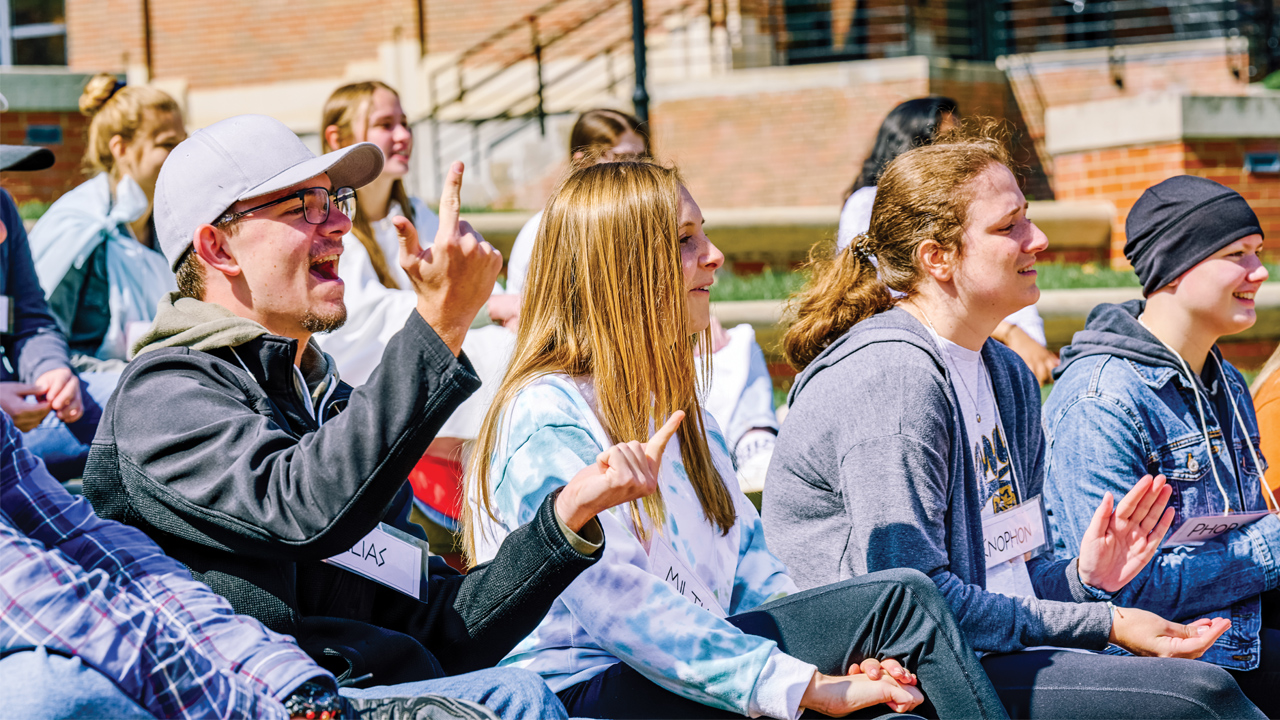 Students in the crowd respond to Ris’ argument. Role-playing games help students put what they’re learning from readings into practice.

The “fun” Crozier refers to is not just merriment for its own sake. Rather he’s referring to an emerging school of thought that finds when students are enjoying themselves, they become more engaged, which fosters deeper learning.

It’s an approach to teaching that is new to Mizzou and institutions around the country. And it was brought here by one of the field’s pioneers. One of the people in the crowd at Socrates’ mock trial, a person who is in the back and quietly taking in the scene, is Victoria Mondelli, founding director of the MU Teaching for Learning Center. About a decade ago at the City University of New York (CUNY), she became aware of game-based learning and the Reacting to the Past consortium that developed this Athenian game and others. Fascinated, she and fellow CUNY professor Joe Bisz started running workshops and eventually conducted research on the interactive pedagogy. Together, they’ve written the soon-to-be-published book The Allure of Play: The Educator’s Design Guide to Active Learning Exercises and Games, which breaks down the mechanics of game-based learning in the classroom.

Research has shown that role-play games encourage students to take what they’ve learned from the readings and put it into practice, creating a cognitive connection to the material and making it easier to learn. Assuming the role of another person also pushes students to practice empathy and look at things from a different perspective. Acting out these perspectives and trying to influence classmates also sharpens skills such as public speaking and debate. This approach seeks to stimulate a higher order of thinking than does rote memorization, Mondelli says. “It moves students toward opportunities to manipulate and create within the field rather than just telling them to read this book or listen to this lecture. You still have to have readings and professors sharing expertise, but when students don’t get an opportunity to engage, they only retain a portion of that and for a very limited time. It’s not long-lasting, deep learning.”

Mondelli didn’t push this new method on faculty when she first arrived at Mizzou to help launch the teaching center in 2018. The game-based approach requires a special kind of facilitator who wants to strike a balance between orchestrating the game with a light touch and yielding control of the class to the students.

In Crozier, Mondelli saw a teacher with “an energy about him,” she says. And it turns out he had some skills he didn’t pick up in graduate school. Crozier grew up playing Dungeons and Dragons in high school and college, frequently acting as Dungeon Master — equal parts planner, moderator and narrator. Mondelli had mentioned the Reacting to the Past curriculum to Crozier’s department chair, and after checking out the materials online, Crozier was intrigued. In spring 2021, he built the Athens game on top of the regular AMS 2100 class. Students are still responsible for completing readings, concept maps and presentations. On top of that, they participate in these microgames (like the Trial of Socrates). Each student also delivers two speeches during the semester. For the role-play games, Crozier built factions of introverts and extroverts and then set to work.

“Students heated up to the idea,” he says. “During the first session, they started to go after each other. I was surprised at how seriously some students took their roles and how relatively little it mattered when someone made a small mistake. After seeing how much they were into it and how they were improvising, I started thinking: It’s working.”

After the students all say their piece and the amphitheater has quieted, it’s time for the assembly to vote on Socrates’ fate based on the arguments. Crozier has distributed tumble rocks to each citizen — four to those in chitons — half of the stones blue, half red. They now quietly line up near the stage, waiting their turn to pass by the Silver Urn of Counting (a tin milk churn) and Glass Jar of Discarding (a vase). In the former, students cast their votes on the verdict, blue for acquittal and red for conviction, then discard the remaining stones in the jar. 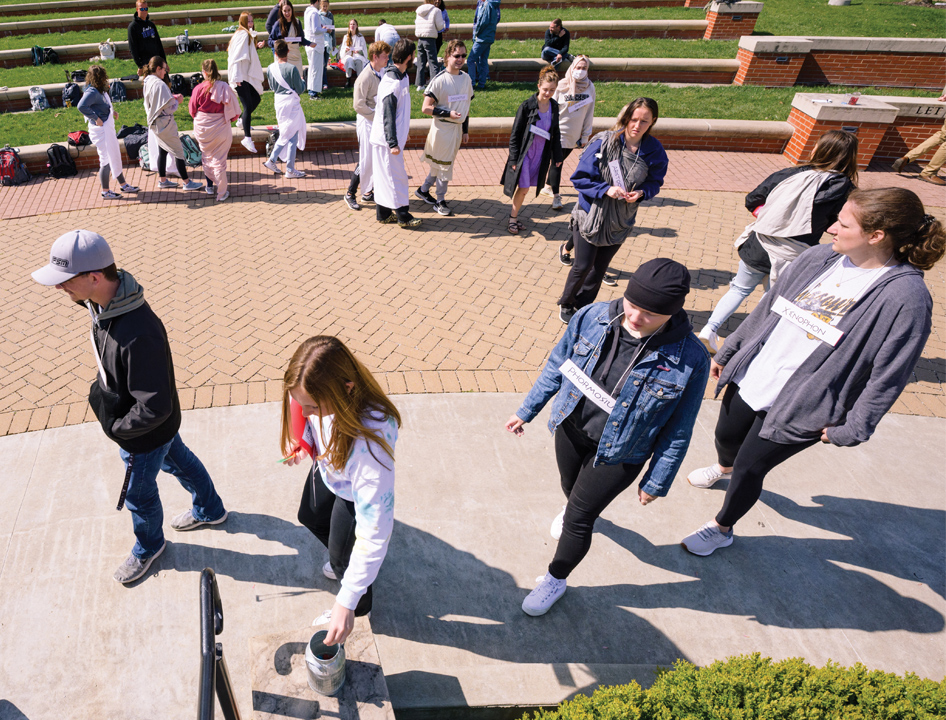 Students line up to vote on Socrates’ fate. 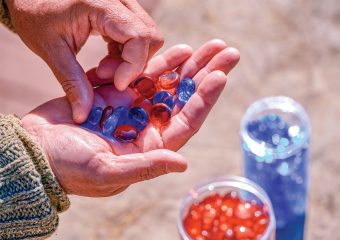 Crozier tallies the votes — blue for acquittal and red for conviction.

Once the solemn act of voting is complete, Crozier picks up the urn, stones rattling inside. He announces that there were 22 votes, so he will stop counting when he reaches 12 of either color.

“The first stone is … acquittal.”

Cheers erupt from the gathering.

“The second stone is … acquittal.”

Crozier draws two more blue stones before the first red stone, which elicits a more raucous, if less prevalent, whooping response. But the outcome is becoming increasingly clear both from the balance of applause and the volume of blue stones that Crozier is lining up on the stone wall. “Socrates is about to break out some wine!” Crozier exclaims. 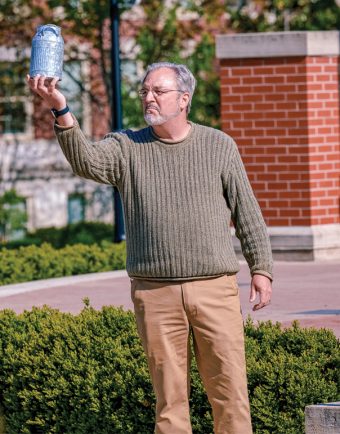 Jim Crozier, assistant professor of classical studies, presents the
Silver Urn of Counting, which holds Socrates’ fate based on the students’ arguments.

Sure enough, the count reaches 12 votes for acquittal with little drama. Socrates is cleared of all charges.

Having come up short of her objective, Anytus/Ris briefly challenges the results by asking the gathering if they are sure they voted correctly. But the majority quickly strikes down the move, and Anytus is resigned. As Crozier dismisses the class, Ris slips out of character and stuffs her chiton sheet back into her backpack. She’ll return next week to lobby her classmates in an attempt to save democracy and boost her grade.