Like a fun-loving Socrates pacing the classroom’s forefront, Nick Potter presents to his students the concept of the “democratic panel.” A lecture on Greek luminaries in a philosophy class, perhaps?

“Our students are working with a traditional comics layout in which every panel is the same size,” said Potter, assistant teaching professor and director of undergraduate studies in the University of Missouri’s School of Visual Studies. “Comics are a visual language for telling stories or communicating ideas using pictures, and that’s how we approach them in this class. It’s a medium with a long history, but one that’s as relevant today as it’s ever been.”

Potter’s introductory comics and cartooning course is open to artists and storytellers at every experience level. And Potter is the perfect teacher to learn from: he’s the author of New Animals, an award-winning collection of surreal fiction that heavily incorporates comic storytelling elements, and Big Gorgeous Jazz Machine, which features experimental graphic works and comics poetry. He’s also the comics editor for Anomalous Press.

During the studio portion of the three credit-hour course, students sketch impromptu micro-narratives, working collaboratively with each other to hone their skills.

“I’ve always been super into comic books, which is actually how I learned to draw,” said Ian Castellanos, a senior digital storytelling major from Kansas City, Missouri. “This class and this type of storytelling has taught me to be patient and to pace myself, especially with animation projects because they can be tedious and time sensitive.”

Read on to see how students are creating new realms in the comic universe. 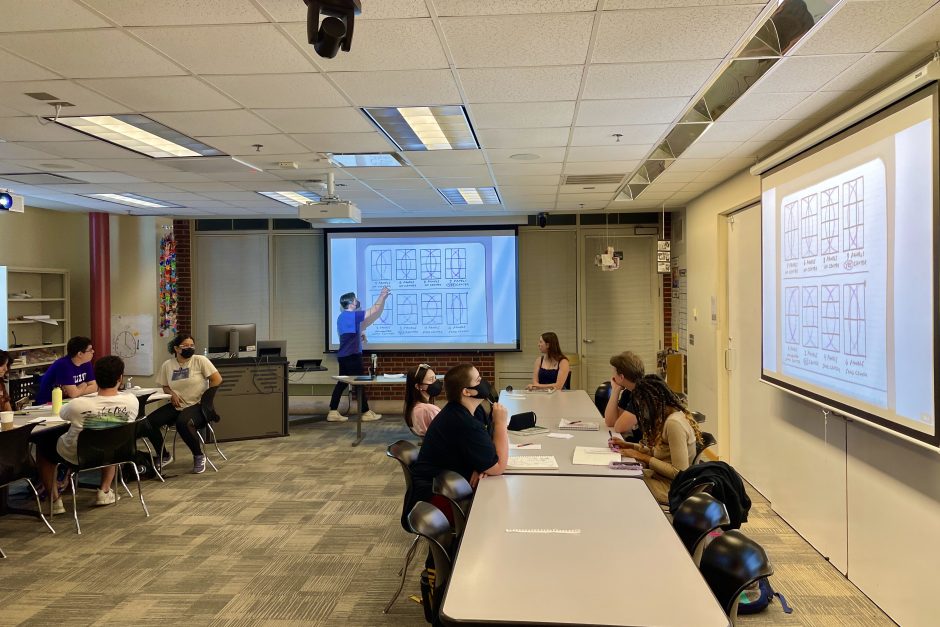 Potter explains the variations of the democratic panel, a traditional comic book layout where each cell is the same size. He also gives a series of prompts to the class to experiment with visual narrative flow. “Comics are a visual language that informs the way that we think about how images and texts should work,” Potter said. 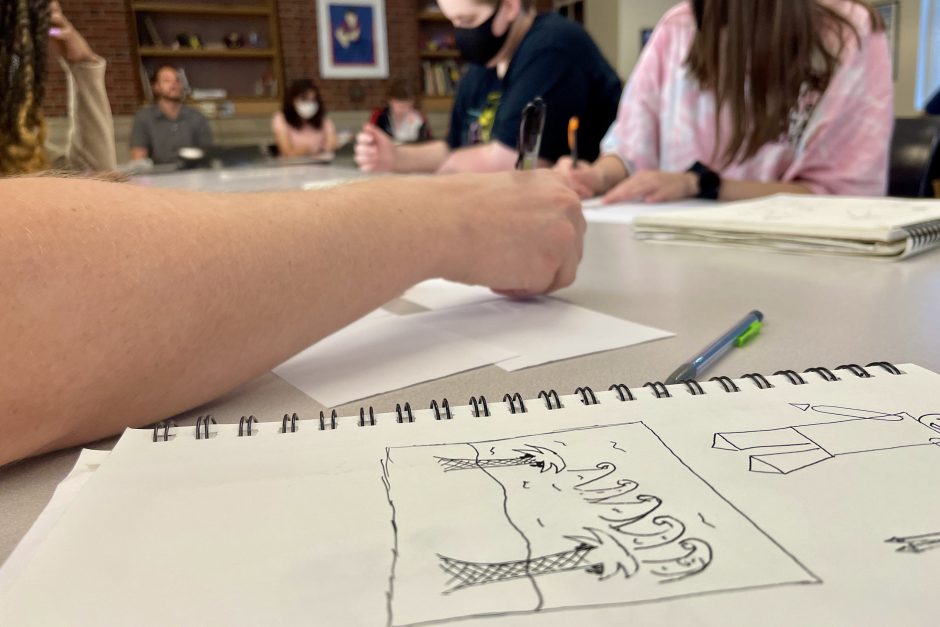 The students’ drawing styles vary from bubbly, Disney-esque characters to more angular, manga-inspired approaches. Sketchpads are often a mishmash of figure studies and thumbnails of panels as students experiment with different storytelling strategies. 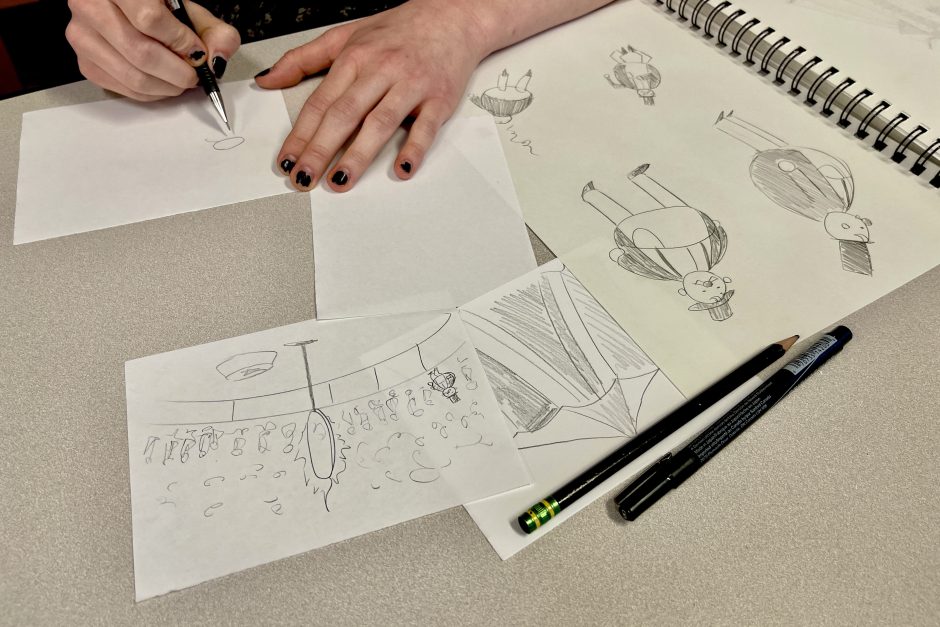 Students from a variety of majors find their way to Potter’s introductory comics and cartooning course. “I’m an animal science major, so there’s not a lot of drawing in my regular courses,” said Katie O'Neill, a junior from St. Louis. “I like drawing animals, but I try to keep those worlds separate … I get to doodle in class, which is something that isn’t normally encouraged.”

Students rapid-sketch story elements on single square panels to play with space and pacing. “I love that we’re free to experiment and that we don’t have to worry about the method that we’re using,” said Abi Mirikitani, a senior romance languages major from Ellisville, Missouri. “And if we don't have an idea, or if we mess up, that's all right, too. The focus is to get it on the page, and then you can work from there — which takes a lot of the stress out of creating the comics.” 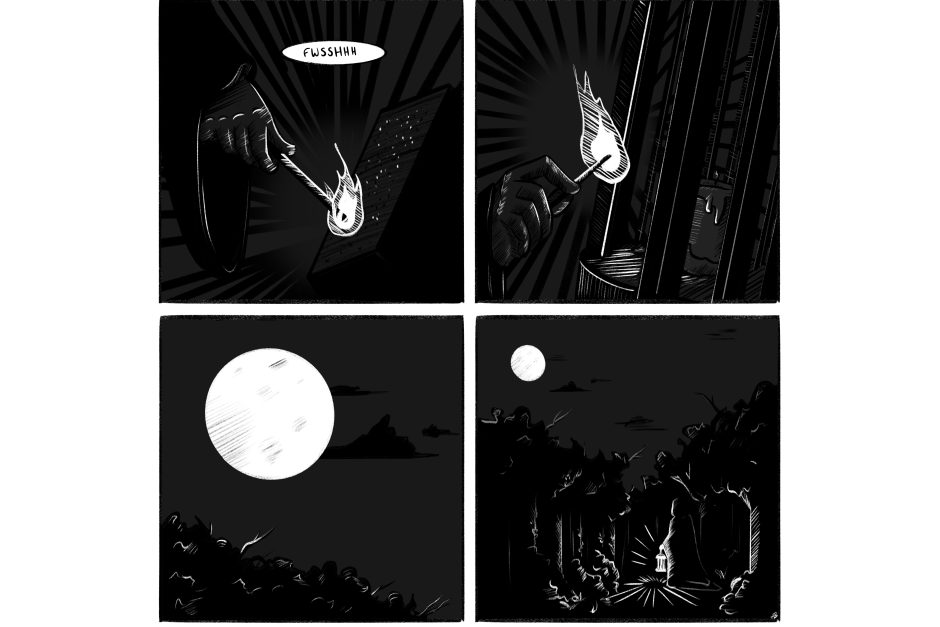 Abby Blenk, a senior digital storytelling and art major from Cincinnati, created this four-panel page using a digital tablet. It depicts a plot point from her comic “Leaving” in which a character sneaks into the woods under cover of darkness. 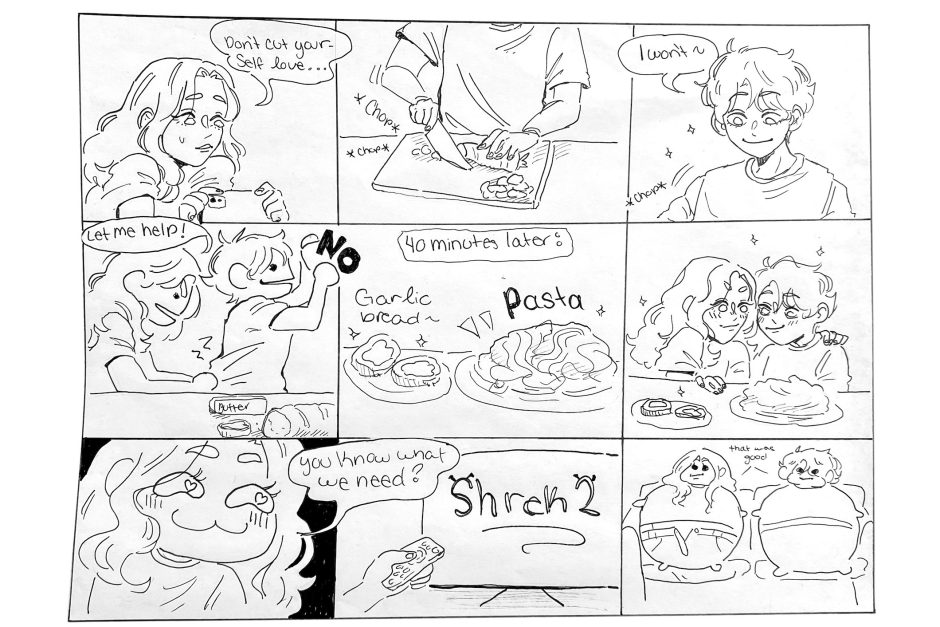 Artist and author Camilla Almaguer, a junior art major from Kansas City, Missouri, created this nine-panel piece depicting a date night with her partner and best friend since the sixth grade. The relationship is a frequent topic of Camilla's work.