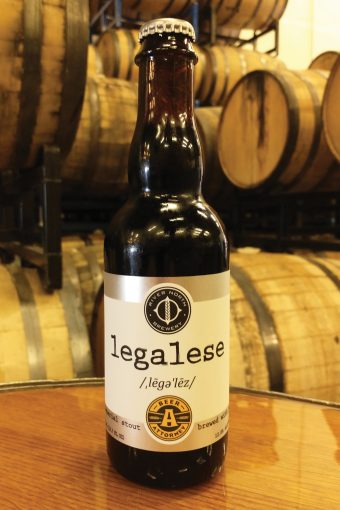 While Matt Hess attended Mizzou, he’d unwind after class with a cold one at Flat Branch Pub & Brewing. Turns out he was tapping into his future.

After graduating, Hess, MBA ’08, took a corporate engineering job in Denver but changed gears to open River North Brewery in 2012. The microbrewery has since acquired a second Denver location and an unlikely ally. Brewers often battle with lawyers over trademarks, but a Mizzou connection inspired Hess and local beer attorney Mike Drumm, BS BA ’01, to collaborate. The Tigers met in 2013 when Drumm arrived at River North with a Shakespeare’s pizza and those iconic plastic cups.

“Matt is the nicest guy in the beer industry,” says Drumm, who has steeped himself in the legalities of the city’s exploding craft beer industry. In 2017, they made Legalese, an imperial stout aged in peppercorns, its label bearing a tiny message: “Always read the fine print.”

Unjust Enrichment, a brandy-barrel imperial stout, is a recent collaboration, advising “Life’s not fair.” Drumm came up with the name, and together they settled on aging the beer in a brandy barrel. Ten percent of overall sales goes to Metro Volunteer Lawyers for pro bono legal counsel.

“Unjust Enrichment is a fancy-sounding legal term, which just means one person getting something good at another person’s expense,” says the beer barrister. His job, he jokes, is overseeing the lawful transfer of flavor from barrel to brew. “If you can’t have fun in your work, what are you doing?”