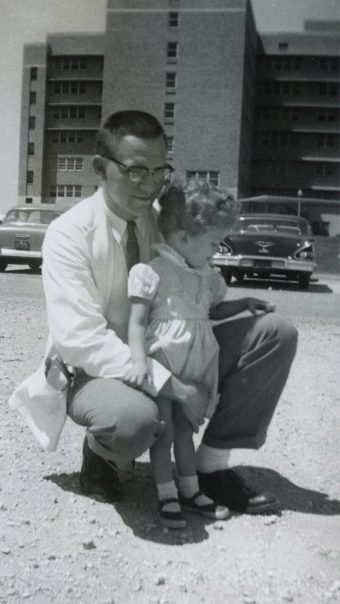 As Richard Schultz, MD ’60, paged through the Winter 2022 issue of MIZZOU magazine, he saw an item about Hugh E. Stephenson, BA, BS Med ’43, performing the first open-heart surgery at University Hospital in 1958. That cast Schultz’s memory back to 1959 and a defining moment of his time as a medical student. He spent three sleepless nights on duty at the bedside of a tiny, curly haired postop patient of Stephenson’s, and she made such an impression on him that he kept in touch for decades afterward.

Schultz rummaged through a box of keepsakes in his home in Fort Lauderdale, Florida, and finally found a letter from 1981 that included a phone number. It seemed like a long shot that Sandy McQuerry, MSW ’86, would still have the same number, but he dialed the digits anyway.

“I saw on my caller ID it said ‘Richard Schultz,’ and I thought, ‘I know that name,’ ” McQuerry says.

They caught up on each other’s lives and discussed the event that had brought them together. As a 2-year-old, she needed surgery to repair a ventricular septal defect — a hole in her heart. Schultz, then a third-year medical student, was assigned to tend to her basic needs in the hospital in the days before and after surgery. McQuerry, whose maiden name is Rinkert, didn’t want much to do with him at first, but he won her over with crushed ice and chocolate milk. After surgery, he was her heart monitor in the days before electronic heart monitors.

“I remember I had my chair right by her bedside, and I think I spent three nights there with my finger on her radial pulse to make sure things were OK,” Schultz says.

Later that summer, Schultz and his parents visited the Rinkerts in Kansas City, and the Rinkerts returned the favor by visiting the Schultzes in New Franklin, Missouri. After graduation, Schultz went to Florida for surgical residency and, after a two-year stint in the Navy, began a long career as a general and trauma surgeon. He did not see McQuerry again, but the families continued to maintain contact through phone calls, letters and Christmas greetings. McQuerry’s mother saved those letters and passed them on to Sandy after her death. A letter Schultz penned to McQuerry’s parents in August 1959 summed up why he never forgot that curly haired girl.

“Believe me, that Friday morning and the following 3 days and nights were just as long for me as they were for you,” Schultz wrote. “But I must truthfully say that when Sandy twice rolled over on Saturday and reached up and put her arm around my neck, that was the best ‘thank-you’ I have ever and will ever receive for anything.”