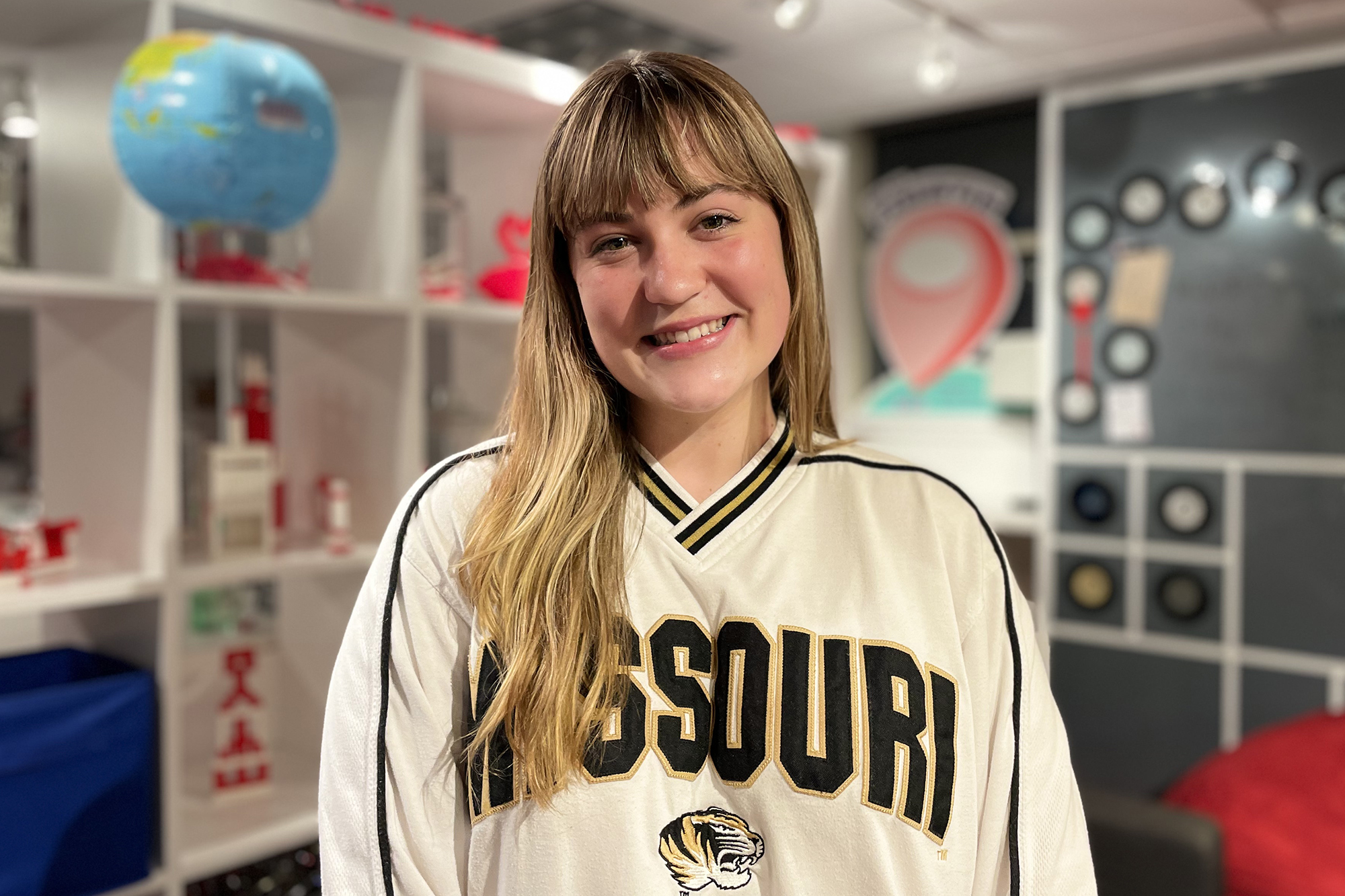 As a senior in high school, Texas native Kristina Essig was enamored — and a tad unprepared — during her first visit to the University of Missouri.

On that January day in 2019, campus was covered in snow and it was only about 10 degrees outside.

“I didn't even have a real winter jacket,” Essig said. “I remember wondering if I could survive here.”

Luckily, her Tour Team leader assured Essig that she would be fine. “She said, ‘Oh, this is the worst it gets. If you can survive today, then you're good.’”

Despite the unexpected weather, Essig fell in love with campus and felt like a Tiger before she even committed to attend.

“Mizzou really made me feel loved,” she said. “Mizzou representatives were always in my inbox and sending me little pieces of mail. They even wished me happy birthday. A lot of colleges didn't do that, so that — along with the J-School and the overall campus beauty — made choosing Mizzou a no brainer for me.”

While Essig’s original plan was to study broadcast journalism, early exposure to hands-on learning helped her realize that wasn’t the path she actually wanted to take.

“I worked a 2:30 to 7:30 a.m. shift at KOMU and I was like, ‘Oh, perhaps not,’” she said. “I admire journalists so much, especially broadcast journalists, but I realized I just wouldn’t be happy in that life structure.”

Essig knew she wanted to remain a journalism major and explored other paths to her degree. As a Walter Williams Scholar, Essig was part of the journalism freshman interest group, pairing her with other journalism majors in her dorm. She’d heard about the strategic communication track and shifted her focus.

“Strategic communication opened up a new world for me,” Essig said. “Words have such power to them; they have the ability to make you feel something. You can take something common and make it something more. That's what I love about this emphasis.”

Through the program, Essig has studied abroad in Brussels and interned at BCW Global, an international communications firm. She also explored other avenues of strategic communication through elective classes on campus, including account management, where she worked to develop a plan for Yahoo! Fantasy Sports.

In addition to her studies, Essig has been involved in many campus organizations, including the American Advertising Federation, the Mizzou PRSSA Chapter and Alpha Delta Pi for which she served as president.

It was the year of her presidency when Alpha Delta Pi and their pairing, Delta Chi, won first place in skit and Homecoming overall.

“I've never been prouder than I was in that moment — standing there with all of our hard work having paid off,” Essig said. “It was a beautiful moment. I still get chills thinking about it.”

Now, as a senior, Essig is an account manager for MOJO Ad, the full-service ad agency that serves as the strategic communication capstone. The position allowed her to lead a team of 10 students in creating a full research, strategy and creative campaign for Sour Patch Kids and its parent company Mondelēz International.

“Throughout my capstone, Jamie Flink and Jon Stemmle have really pushed me to make me the best account manager I can be,” Essig said. “Overall, Mizzou has helped me achieve my goals by putting me in a network with a bunch of other very passionate Tigers and giving me opportunities where I can really get involved and learn the trade.”

After graduation, Essig will return to Texas and continue interviewing for jobs.

“Coming to Mizzou is the best decision I ever made,” she said.