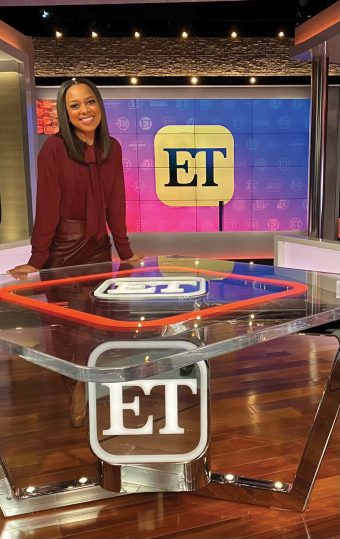 When Nischelle Turner was named as co-host of CBS’ Entertainment Tonight this spring, she became the first Black woman host in the show’s 40-year history. To mark her achievement, Oprah Winfrey, with whom she walked in Selma, Alabama, to honor civil rights pioneers, sent dozens of pastel roses. The gift so thrilled Turner that she dried the flowers and kept the huge arrangement. Her 69,000 followers on Instagram can see it, next to pictures of Turner in gorgeous ball gowns on red carpets and her gym workout sessions.

“I stand on the shoulders of so many of the great women in this business — Oprah, Carole Simpson and April Eaton, whom I watched on TV growing up as a farm girl in Columbia [Missouri],” says Turner, BJ ’98. “It’s a real responsibility.”

Behind the glamour of her job was a rigorous climb through small-market TV stations and reporting for CNN from overseas hotspots and disasters like Hurricane Katrina, where she slept in her rental car. She’s done everything from operating cameras to assigning stories, editing and working the overnight desk. “Viewers see the finished show. They don’t see you in an airport with a coat over your head, adding last-minute tracks to finish a segment,” she says.

Growing up in a sports-mad family, she played volleyball and ran track at Rock Bridge High School, giving up basketball for cheerleading. Mentors and athletes gave her a crash course in network sports broadcasting before she started covering professional baseball, basketball and working as a sideline reporter for Fox NFL Sunday.

Her friendship with Shaquille O’Neal led to him asking her to join his Big Podcast, which she started in March. She also hosts a new CBS show, Secret Celebrity Renovation, where celebrities surprise a person who has been central to their lives with a home renovation. If she got that opportunity, the gift would go to her mother, Jacque Turner, who remains on the family farm. “She’s the one who made me a Cardinals fan for life,” Turner says. “She listens to every game on her transistor radio.”

Her promotion to Entertainment Tonight allowed Turner to launch a scholarship to honor her grandparents, James and Margie Turner. It’s given to a deserving student from Columbia’s Frederick Douglass High School to attend college. She also is a mentor for the L.A.-based group Brown Girls Dream and volunteers with the Boys and Girls Clubs of America. “Our family is all about stewardship and helping others,” she says. “We have a family day of service once a month and have for 40 years.”

Although she’s lived in Los Angeles for 17 years, Columbia will always be home to her, she says. “As soon as I drive down I-70, I’m in my happy place.”