Exchanging a high-five with Truman the Tiger is a right of passage among University of Missouri students and community members. In honor of International Tiger Day, we’re looking back at the origins of the Tigers and the birth of our favorite tail-spinning, push-up-celebrating mascot.

The origins of the Mizzou Tigers date back to post Civil War. In 1890, the men of Mizzou's first football team adopted their name in honor of a militia unit nicknamed "Tigers" — made up of locals who came together to defend Columbia from guerrilla bands during the war. 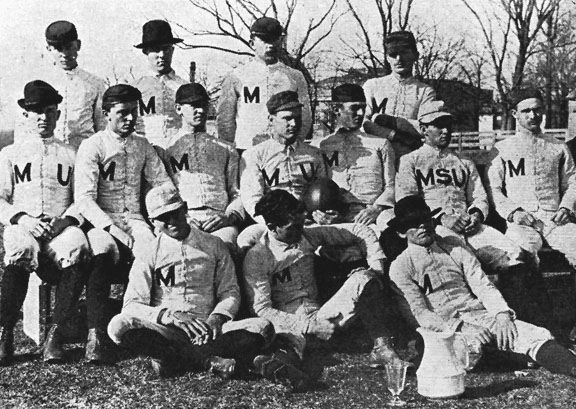 MU’s student-portrayed tiger mascots date back to the 1940s with members of the Tiger Claws pep squad playing the part. Early costumes consisted of a body made out of yellow cloth with painted stripes and a head made of papier-mâché. During this time, there were two mascots, a female tiger (Lil Tiger) and a male tiger (Big Tiger). 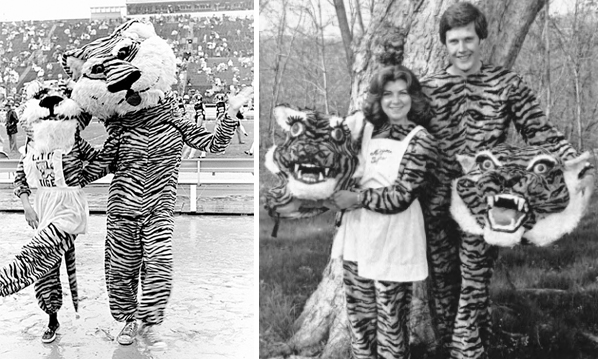 In the 1950s, Mizzou’s tiger made its way onto clothing, posters, publications and more. Amadee Wohlschlaeger, the Weatherbird cartoon artist for the St. Louis Post Dispatch from 1932 to 1981, drew covers for many of Mizzou's football game programs from 1959 until the mid 1990s — most of them featuring his own version of the tiger. 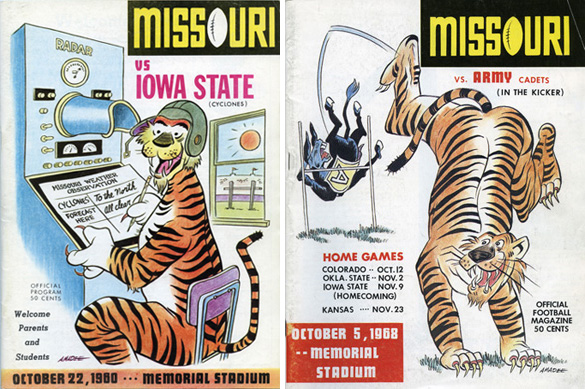 Famous cartoonist Charles Schulz (the creator of Peanuts), also got in on the action and created his own Peanuts version for the 1956 Homecoming edition of The Maneater. In the comic, if you look below the tiger, you’ll see “Walker” hidden in the grass — a nod to Schulz's friend Mort Walker, the creator of Beetle Bailey and a Mizzou alumnus.

In 1981, the two mascots were combined into one unisex tiger. The newly designed mascot went nameless for three years until Mizzou cheerleaders ran a "Name the Tiger" contest in 1984, in order to raise money for a carrying case for the mascot uniform. Entrants submitted their proposed names for one dollar. The winner, of course, was Truman (a nod to 33rd U.S. president and Missouri native Harry S Truman). 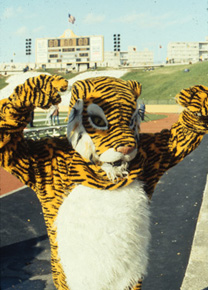 The Truman the Tiger fans know and love made his first appearance at the Sept. 13, 1986, Missouri-Utah State football game. Former Director of Athletics Joe Castiglione tapped Festus, Missouri, native Joe Turnbough and team to help design the costume and develop the overall personality of our favorite big cat. Each year, fans celebrate Truman’s birthday on Sept. 13, in honor of his original appearance. 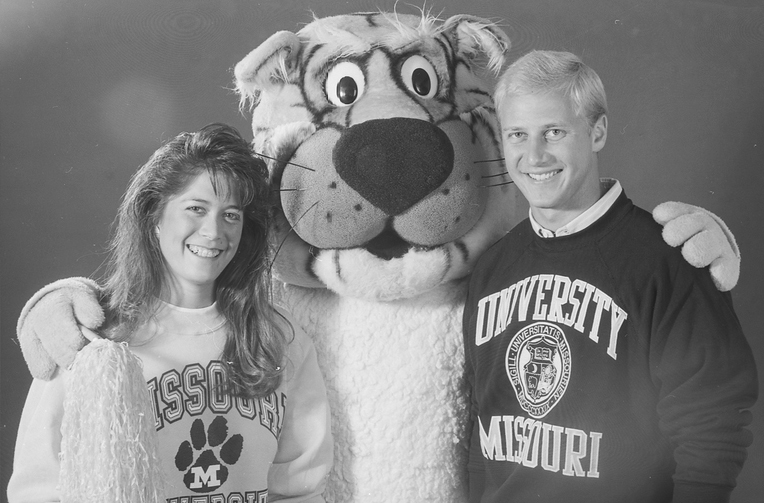 Since the ’80s, Truman’s popularity has continued to grow. He was first acclaimed the “Best Mascot in the Nation” in 2004 and repeated the honor in 2014. In a typical year, Truman makes more than 400 appearances, including those at MU football and basketball games, hospitals, schools, community events and campus gatherings. 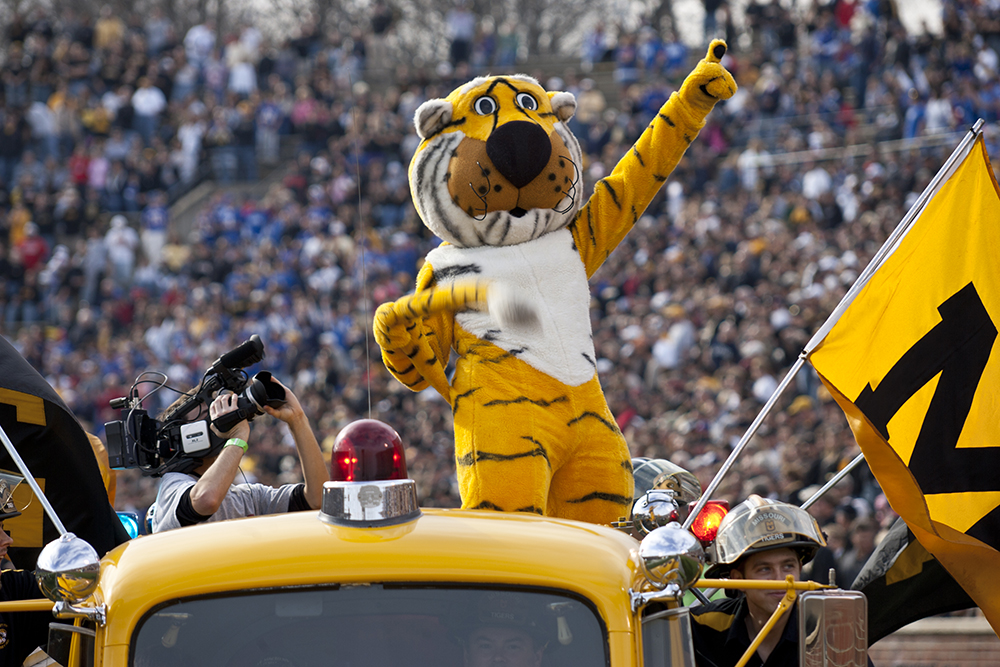 Truman swings his tail at a 2014 football game.

For 35 years, Truman has been the face of Mizzou. In that time, dozens of students have helped bring him to life — traditionally revealing their identity by wearing plush paws at commencement.

In addition to taking care of Truman on campus, the University of Missouri is doing its part to help tigers in the wild. MU, along with Auburn University, Clemson University and Louisiana State University (who all have tiger mascots), is part of the U.S. Tiger University Consortium — a group aimed at protecting wild tigers and their habitat. 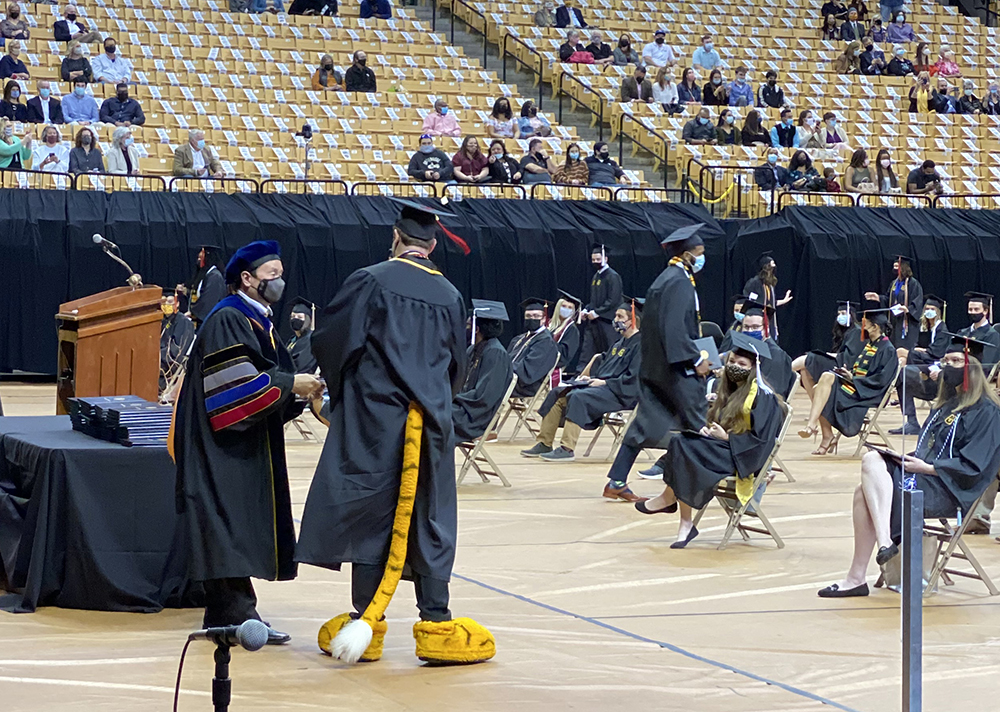 Learn more from the University Archives