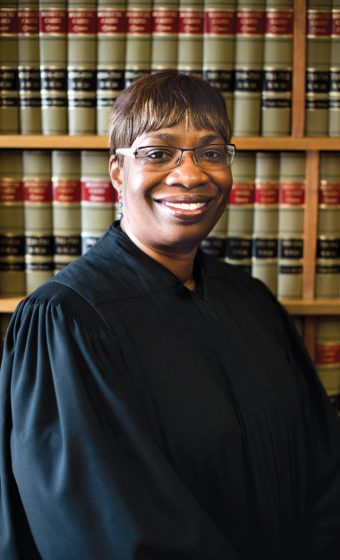 It wasn’t her ambition to make history, but Judge Robin Ransom, JD ’91, is nonetheless the first Black woman to sit on the Supreme Court of Missouri. “Some people say from the time they were born they wanted to be an attorney or they wanted to be a judge,” Ransom says. “I’m one of those who started off hoping I’d be a rock star.”

Law school, she says, was a “default into adulthood.”

After graduating from Mizzou’s School of Law, Ransom started her legal career as a public defender. Her experience in juvenile court launched a lifelong commitment to making a difference in the lives of young people. It also planted in her the idea of someday becoming a judge. “I thought this was a position that would encompass everything that is important to me — using my law degree and helping people become the best version of themselves,” she says.

Appointed as a family court commissioner in St. Louis County in 2002, she went on to become a circuit judge in St. Louis in 2008. Eleven years later, she was appointed to the Missouri Court of Appeals Eastern District, where she served until May, when Gov. Mike Parson selected her for the high court.

As she begins work, Ransom already has an eye on her legacy, citing three goals: “I want to maintain fairness for every litigant who appears before me. I want to encourage kids to consider government service. And I want to knock this job out of the park so that others who come behind me have an easier row to hoe and their race or gender won’t be such a talking point. It’ll be, ‘Oh, this person is doing this job.’ ”