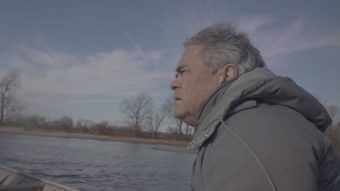 Mark Morgan is on a mission to address the global malnutrition crisis by pulverizing Asian carp.

Asian carp are the most invasive fish in North America. They tend to out-compete native species, steeply decrease biodiversity in waterways and pose a threat to commercial and recreational fishing. Now, a researcher at the University of Missouri’s College of Agriculture, Food and Natural Resources has a novel plan to address food insecurity around the world by pulverizing the fish to capture its high nutritional content.

“These fish are a delicacy in China, where they are native, but Americans tend to dislike them,” said Mark Morgan, an associate professor in the School of Natural Resources. “Why eat bony, ugly carp when we can have trout and salmon, instead? But taken as a nutritional supplement, these fish, which have high amounts of macro and micronutrients, could have an incredibly positive impact on society while we loosen their hold on our waterways at the same time.”

Bighead and silver carp — collectively known as Asian carp — were first introduced to the U.S. nearly five decades ago with high hopes that they would control algae and weed growth. But the voracious carp soon made their way into the Mississippi River, using its tributaries to spread throughout the South and Midwest. Experts fear that if Asian carp infiltrate the Great Lakes, they could inflict billions of dollars of damage to the region’s fishing industries. 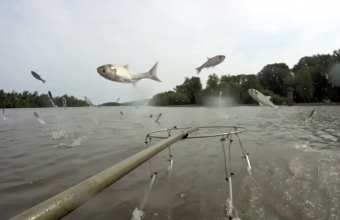 Silver carp are known to scare the carp out of fishers and boaters by leaping high into the air, potentially injuring people and damaging boats. Image courtesy of Evann Twitchell and JM Films.

Asian carp are known to create impressive and daunting displays while filling waterways, sometimes making up as much as 95% of a river’s biomass. In particular, silver carp — which boast a silver sheen and are found in at least 88 countries worldwide — often leap high above the water’s surface, an ability that experts believe could contribute to the fish’s ability to bypass obstacles and spread further throughout an intricate system of inland waterways. This indiscriminate leaping behavior can also injure people and damage boats.

Morgan, who has been researching Asian carp for nearly a decade, has successfully tested a process that pulverizes and dries the carp into a fine powder, rendering its less-than-attractive appearance irrelevant for prospective use as a food additive or supplement. This cold process is effective at capturing nutrients and also ensures that the end product has a long shelf life. Morgan believes that fish powder could have far-reaching benefits for food-impoverished communities around the world.

“In Haiti, for example, almost 50% of women of reproductive age are anemic,” Morgan said. “With these fish, the iron and protein content alone are a natural solution to a global malnutrition crisis. It’s exciting to consider the possibilities of who this powder could help.”

In addition to iron and protein, silver carp contain high amounts of calcium and potassium, as well as Omega-3 fatty acids and all nine essential amino acids. As a superfood, silver carp powder could prove to be a cheap and efficient source of nutrition for many of the estimated 2 billion people facing food insecurity worldwide.

To reproduce the process on a larger scale, Morgan will require some heavy machinery. A fundraising drive will kick off on Sunday, Feb. 21, in conjunction with the Wild & Scenic Film Festival that will air a film about Morgan’s research on that day. Also, a watch party and Q&A for the film will be held on March 3 at 7 p.m. Those interested in donating to Morgan’s project can click here, and more information about the film festival can be found here.