“The Robert and Shelly Griggs Family Innovators Nexus is where students can turn their business aspirations into reality,” said Mun Choi, University of Missouri president. “Through their financial support and mentorship, the Griggs family is building the next generation of entrepreneurs right here at Mizzou.” 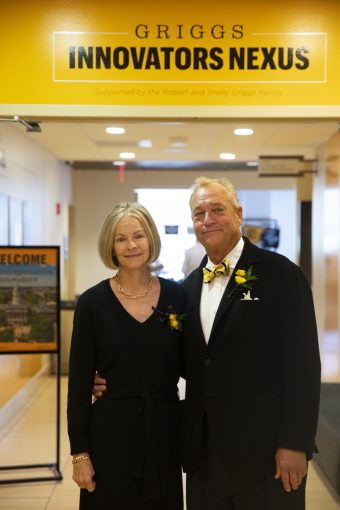 Robert and Shelly Griggs, together with their sons A.J. and Bo, have committed a combined $1.16 million to the university in cash and planned gifts to promote student success, primarily by supporting entrepreneurship and athletics. Their latest gift of $450,000 will establish the Robert and Shelly Griggs Family Innovators Nexus, which will provide guidance to student entrepreneurs with expertise, programming, coaching, funding and other resources to help them succeed. Select students will receive rent-free space to operate a storefront for their businesses.

“The Griggs’ legacy at Mizzou is one of supporting entrepreneurship and empowering students to bet on themselves and their ideas,” said Jackie Lewis, vice chancellor for Advancement. “We’re incredibly grateful for everything they’ve done to foster an entrepreneurial spirit here on campus.”

Shortly after graduating MU with a bachelor’s degree in agricultural economics in 1977, Robert Griggs founded Trinity Products, which has grown to be one of the nation’s leading producers of large-scale, spiral welded pipes. Griggs currently serves as president.

“Mizzou changed the trajectory of my life and allowed me to see the world differently,” Griggs said. “It’s important to me and my family that we give back and share our blessings. It doesn’t get much better than supporting entrepreneurship at my alma mater.”

As a business owner, Griggs works to empower his employees through transparency. Once a quarter, he opens the company’s books to his employees so they can see the productivity of the company and work as partners to meet business targets. He brings the same sense of partnership and openness when mentoring young entrepreneurs. 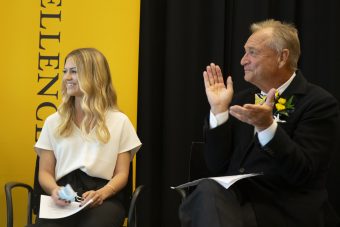 Entrepreneurship is part of the Griggs family DNA. Sons A.J. and Bo Griggs are both MU graduates who put their skills to work for the family business and beyond.

A.J. graduated in 2009 with a degree in interdisciplinary studies before joining the family business as part of Trinity’s leadership team and member of the company’s board of directors. Bo started another Griggs family business, National Flatbed Solutions, in 2019 after graduating with honors and a degree in history in 2010.

“As a mother of two Mizzou graduates, I am happy we are able to help any student on an entrepreneurial path,” Shelly Griggs said. “Having started our business, we understand how important it is to give back and help others succeed. Sharing knowledge and investing in programs that encourage and guide student entrepreneurs are keys to success.”

Robert, who serves as a member of the Center for Sales and Customer Development and Entrepreneurship Alliance advisory boards at MU, regularly invites MU students to visit his welding company in St. Louis, and mentors students one-on-one to share his insights with young entrepreneurs.

“I’ve lived the entrepreneur life for more than 40 years, so I know how they’re thinking and understand their fears,” he said. “It’s scary to start your own business, which is why we support the business school and entrepreneurs in all the ways we can.”