Some premature babies need the help of life-saving machines in a neonatal intensive care unit, or NICU, to provide oxygen that eases the struggle to take their first breaths. However, small, personalized adjustments — to either raise or lower the level of oxygen provided — must be made by hand under the careful attention of nurses and respiratory therapists. Now, a clinical trial will test a new device, designed by a researcher at the University of Missouri College of Engineering, that could make those needed adjustments for premature babies in a NICU — automatically. 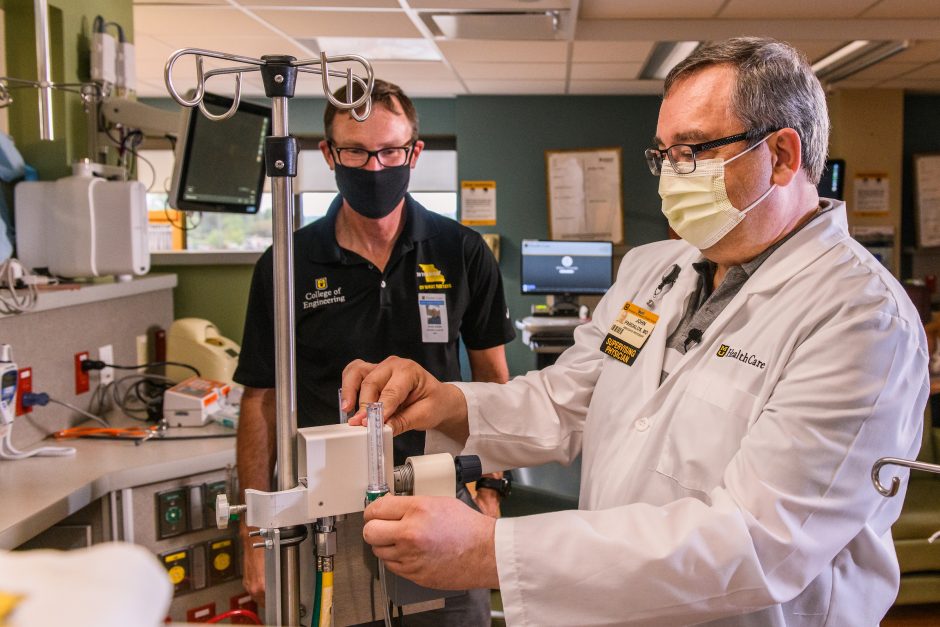 Roger Fales, left, and John Pardalos, work to set up the device that can automate the process for adjusting oxygen levels for babies while in the NICU.

Roger Fales, an associate professor and associate dean in the College of Engineering, who designed the device, compares it to the way cruise control works in a vehicle.

“On the automobile, cruise control automates the process of keeping the speed constant in your vehicle, even as the vehicle goes up and down hills,” Fales said. “In the case that we have here, we're automating the process of adjusting the amount of oxygen that the baby receives to keep their blood oxygen saturation constant. The more consistently we can control the oxygen, the better the baby is, and the faster the baby is going to be able to develop. Plus, there will be fewer events that are detrimental to the baby’s health.” 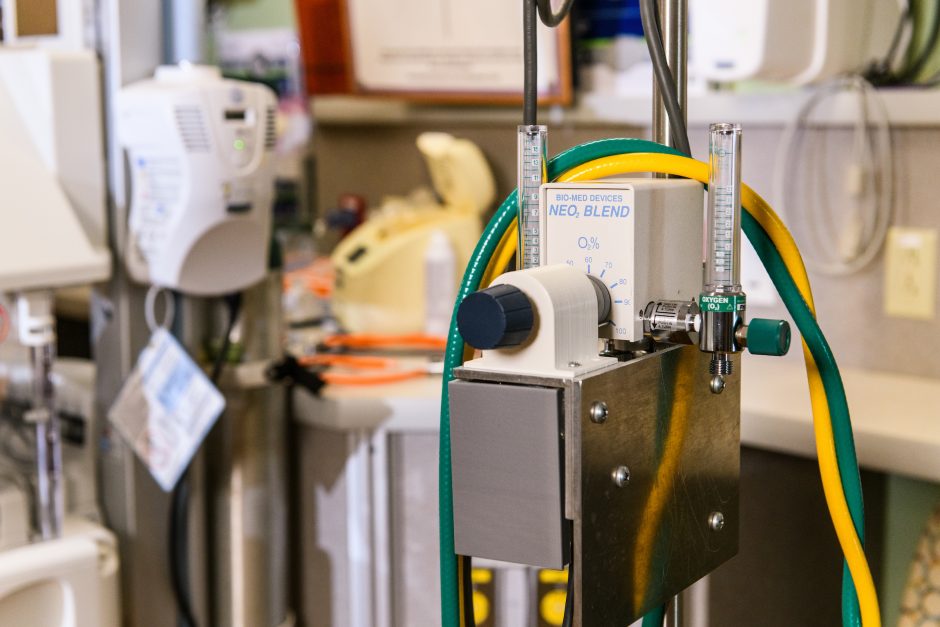 The device designed by Roger Fales, an associate professor and associate dean in the College of Engineering. Fales compares it to the way cruise control works in a vehicle.

Currently, nurses must manually turn a knob to raise or lower the level of oxygen in response to alarms coming from a vital signs monitor. This device would automate that process by using a microcontroller, or small computer chip, that can receive the alert signal coming from the monitor and then automatically adjust the amount of oxygen to the changing needs of the child, thereby allowing the nurses to perform other duties in the NICU. The goal of the device is to improve health outcomes for premature babies by stabilizing their blood oxygen levels.

John Pardalos, an associate professor in the Department of Child Health in the MU School of Medicine, who is helping oversee the clinical aspects of the trial, said one projected outcome of the study will be examining how well the device performs as compared to the current manual procedure.

“The thing that we'll look at is what kept the oxygen level in the prescribed range the most, the nurses or the computer,” Pardalos said. “We have very tight parameters for the oxygen levels that the nurses and the respiratory therapists must ensure are met.” 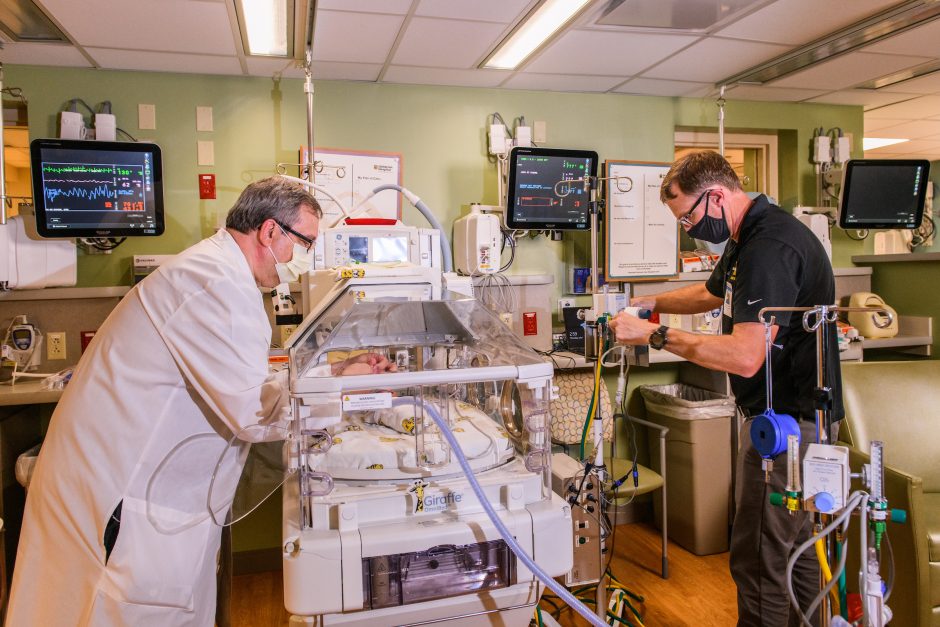 John Pardalos, left, and Roger Fales, demonstrate how the device will work in a NICU.

Approximately 60 premature babies will be enrolled in the trial — half at MU Health Care's Women’s and Children’s Hospital and the others at Studer Family Children's Hospital at Ascension Sacred Heart in Pensacola, Florida. Fales and Pardalos are collaborating with Ramak Amjad, MD, a neonatologist in Florida, an adjunct professor at Mizzou and co-inventor of the device. Together, Fales and Pardalos hope to build on the success of a previous pilot study they conducted with the device involving eight babies. Fales said collaboration has been key to their success so far.

“Without having the ability to collaborate with good people at MU Health Care and the MU School of Medicine, this sort of collaboration would not be possible,” Fales said. “It really takes both engineers and medical doctors to be able to put this this kind of project together.” 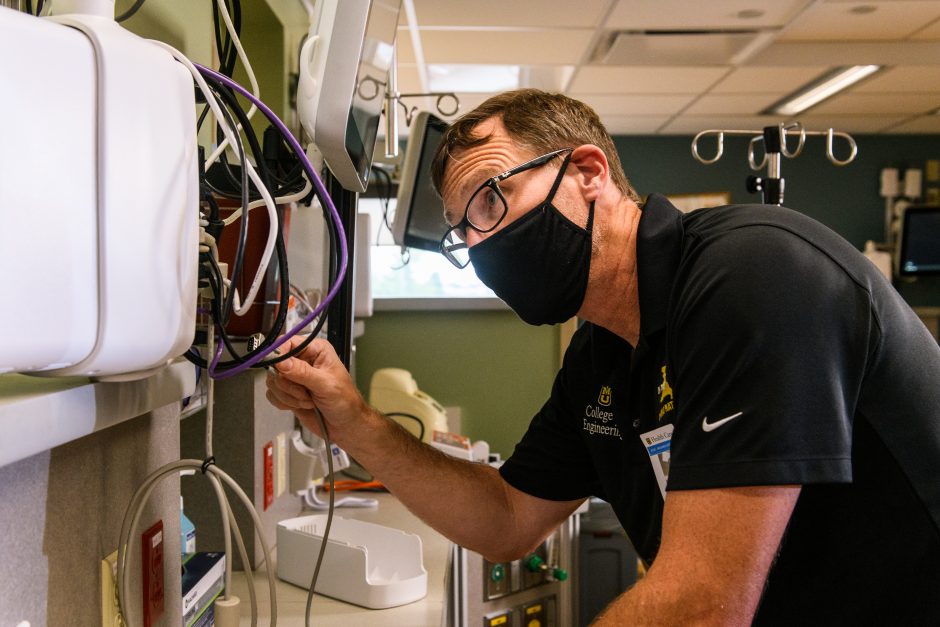 Roger Fales works on connecting a computer to the device, which will help in automating the process.

The project will also create opportunities for engineering students at MU to have a hands-on learning experience, Fales said.

“Not every student in engineering gets to go to a hospital and see something in action,” Fales said. “Having the experience and opportunity to develop a medical device in our lab on the University of Missouri campus, and then take that device over to the NICU and work directly with the neonatologist, is going to set us up for not only producing research results, but also educating the students that are involved. They're a big part of this project, and gaining this kind of experience is going to allow them to work within medical-specific areas within engineering and also demonstrate and build skills for working in multiple disciplinary teams that can be useful anywhere within engineering — or outside of engineering as well.”

Funding is provided by a grant from Child Health and Human Development at the National Institutes of Health and a grant from the University of Missouri Coulter Translational Partnership.