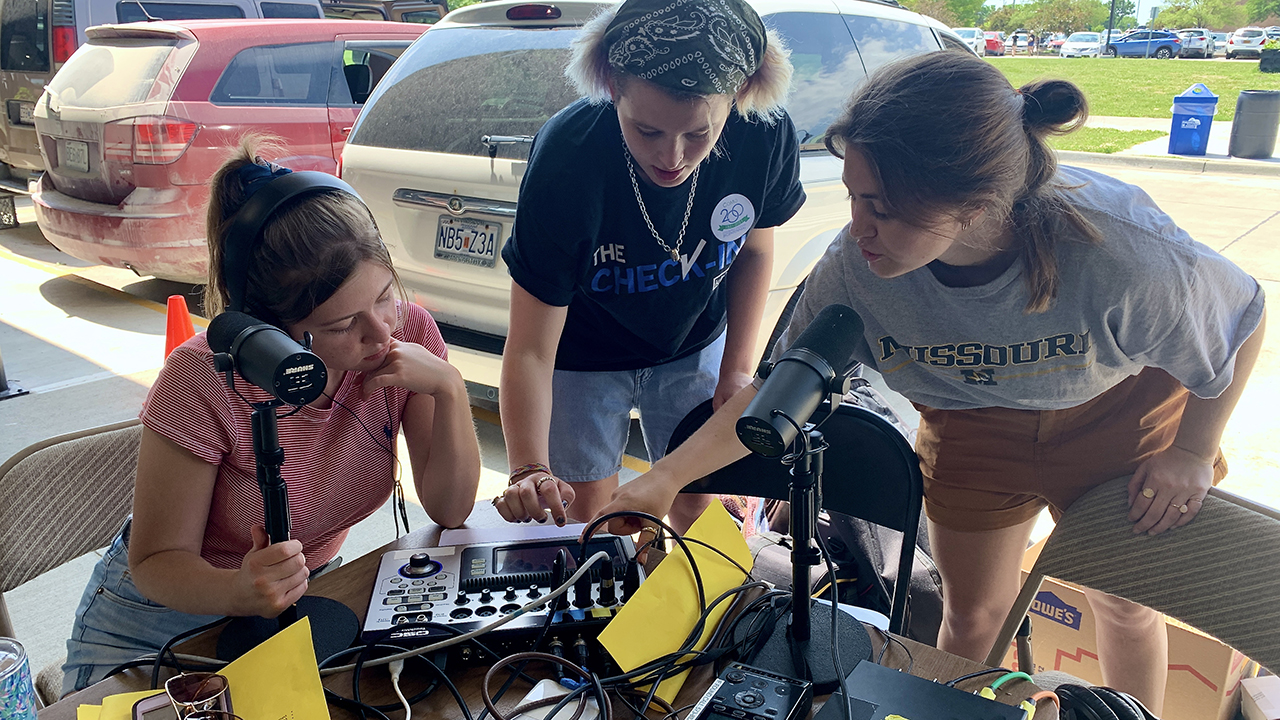 Emma Boyle, left, Becca Newton and Regan Mertz make adjustments to a sound mixer June 12 at the Columbia Farmers Market in Clary-Shy Community Park. The students are members of KBIA’s Missouri on Mic team, which is recording anecdotes from Missourians as part of the state’s bicentennial commemoration.

Students from the University of Missouri School of Journalism are crisscrossing central Missouri this summer, capturing audio recollections from people as part of Missouri’s bicentennial celebration.

They’re recording conversations for Missouri on Mic, a collaboration between the School’s NPR-member station KBIA-FM 91.3, the State Historical Society of Missouri, Missouri Humanities and the Ragtag Film Society.

Hook and a team of students travel to various locations with mixing boards, microphones and two portable audio booths.

“It’s very complex and it’s definitely interesting,” said Associate Producer Becca Newton, a rising senior from Eureka, Missouri. “It’s definitely a lot of work to figure out exactly how the hardware works.” The system was designed by KBIA Chief Engineer Mark Johnson, who’s a telephone call away if the team runs into a technical issue in the field.

For some of the students, this is their first opportunity to be out in the field since the coronavirus pandemic began.

“I’ve really loved being able to participate in the oral history aspect,” said Newton, who’s minoring in history, “so being able to have all of that combined and then be able to have these conversations with local people and learn a lot from them is great. I’m getting a lot of experience my first semester in the field.”

Students are learning “a myriad of things,” said Hook, including production and interview techniques. “They’re leading an interview and they’re leading a conversational-based interview. It flows a little differently than maybe a traditional two-way where they’re kind of handing over the mic a little bit.”

The initial conversations usually last about 15 to 20 minutes but can go as long as 40 minutes. The students later edit them down to radio length, which is just under four minutes.

Edited conversations began airing last month on KBIA and each complete conversation will be archived at the State Historical Society.

“It’s been an incredible collaboration with the Journalism School and the University of Missouri to really get behind this moment in time,” said Beth Pike, senior strategic communications associate at the State Historical Society. “Missouri on Mic is one of the more unique programs of our Missouri bicentennial. It’s allowing us to tap into Missouri here and now, tapping into what is it like to be a Missourian.”
Read more from the Missouri School of Journalism