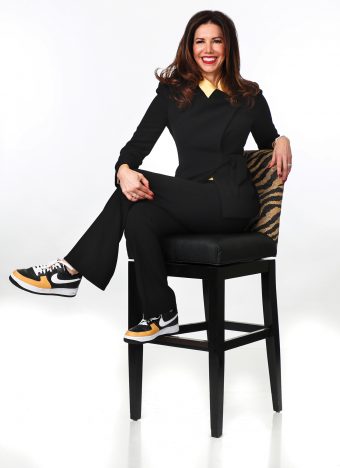 Desiree Reed-Francois recalls a day last summer shortly after she became a leading candidate for athletic director at MU. She was working in the same role at the University of Nevada, Las Vegas, but the Mizzou position would mean a move to the Southeastern Conference, a dream job, and she was hopping a flight to Missouri the following day.

With her husband out of town, she enlisted her 17-year-old son, Jackson, to accompany her on a last-minute trip to the mall. Problem was, she couldn’t tell Jackson what she was up to — buying a gold blouse for her interview at Mizzou. Coincidentally, Jackson, a high school hoops player, had recently decided to come to Mizzou to study sports journalism. Reed-Francois didn’t want to tell her son about the job and make things uncomfortable in case she didn’t get it — or make things even more awkward if she did. Once at the mall, mother sent son on a wild goose chase to buy a ballcap while she ran upstairs to make her purchase.

On Aug. 8, University of Missouri President Mun Choi announced that Reed-Francois had indeed gotten the job, the first female AD in university history. “When I called Jackson and told him, it was an emotional moment for our family,” Reed-Francois says. “It was professionally meaningful and an opportunity to be at the school where my son was going. Then Jackson joked, ‘Mom, you are redefining the term helicopter parent.’ ”

Joking aside, Reed-Francois developed a love for Mizzou as a parent and speaks often to recruits’ families about why her family chose Columbia for their only child. “I wanted teachers and a university that were going to challenge Jackson and push him but also be there with compassion and support him when he fails,” she says. “I want that for every one of my student-athletes.”

One of her duties there in 2011 was to help interview and eventually hire basketball Coach Cuonzo Martin. “There was a human element there,” says Martin, now in his fifth year leading the Tigers. “Sometimes with people in power, we don’t see their compassion. She was a hard worker and committed to excellence, but there was definitely an element there that understood what a coach and student go through.”

Martin saw that Reed-Francois’ drive and focus could enable her to jump to AD, and in 2017, she got the job at UNLV. She oversaw the opening of a $35 million football complex; negotiated a shared-use agreement for the NFL Raiders’ new home, Allegiant Stadium; and helped raise more than $60 million. Football ticket sales leapt up 200%. Mizzou’s search committee liked what they saw.

Reed-Francois comes to the Mizzou job expecting competitive success but also dedicated to giving student-athletes a complete college experience — a launchpad for stellar professional careers, on or off the playing field. And, of course, she sees Mizzou as a place where parents just like her from all over the state, the country and across the globe feel good about sending their kids to grow.