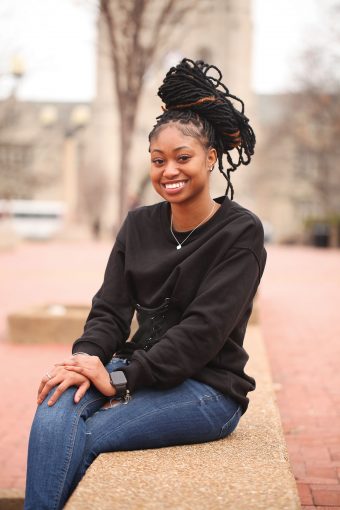 Health sciences major Dream Dennis knew it wouldn’t be easy to work her way through college. But in July 2019, when a study abroad opportunity cropped up before her senior year, she knew she’d regret not making it happen. “I got to teach kids in South Africa,” Dennis says. “I learned more than I thought possible, but I was paying for it out of pocket.” While away, her bills kept coming in.

Dennis was a semester away from graduation in November 2019 when she had to tell her parents about her financial situation.

“I let them know I was working as many hours, as many shifts as I could, but those daily bills — the groceries and all — were adding up,” Dennis says. “Then Rally Mizzou came through for me.”

Started and initially funded by Mizzou students, Rally Mizzou provides financial assistance to seniors with past-due balances of less than $2,000 — enough to pay their bills, stay in school and graduate. The average award is $1,062, and 95 percent of recipients either have graduated or remain enrolled at Mizzou.

Rally Mizzou donor Jim Mendelson, BS BA ’84, had not previously directed where his Mizzou donations should be spent, but something about Rally Mizzou captured his imagination. “There are others giving to Mizzou that have way more resources than I do — they’re adding buildings, naming things, which is all important,” Mendelson says. “But even with what I’m able to give, it’s creating lasting impacts.”

The Rally Mizzou grant covered Dennis’ past-due balance. “It lifted such a huge burden off my back,” Dennis says. “I’m going to graduate.”