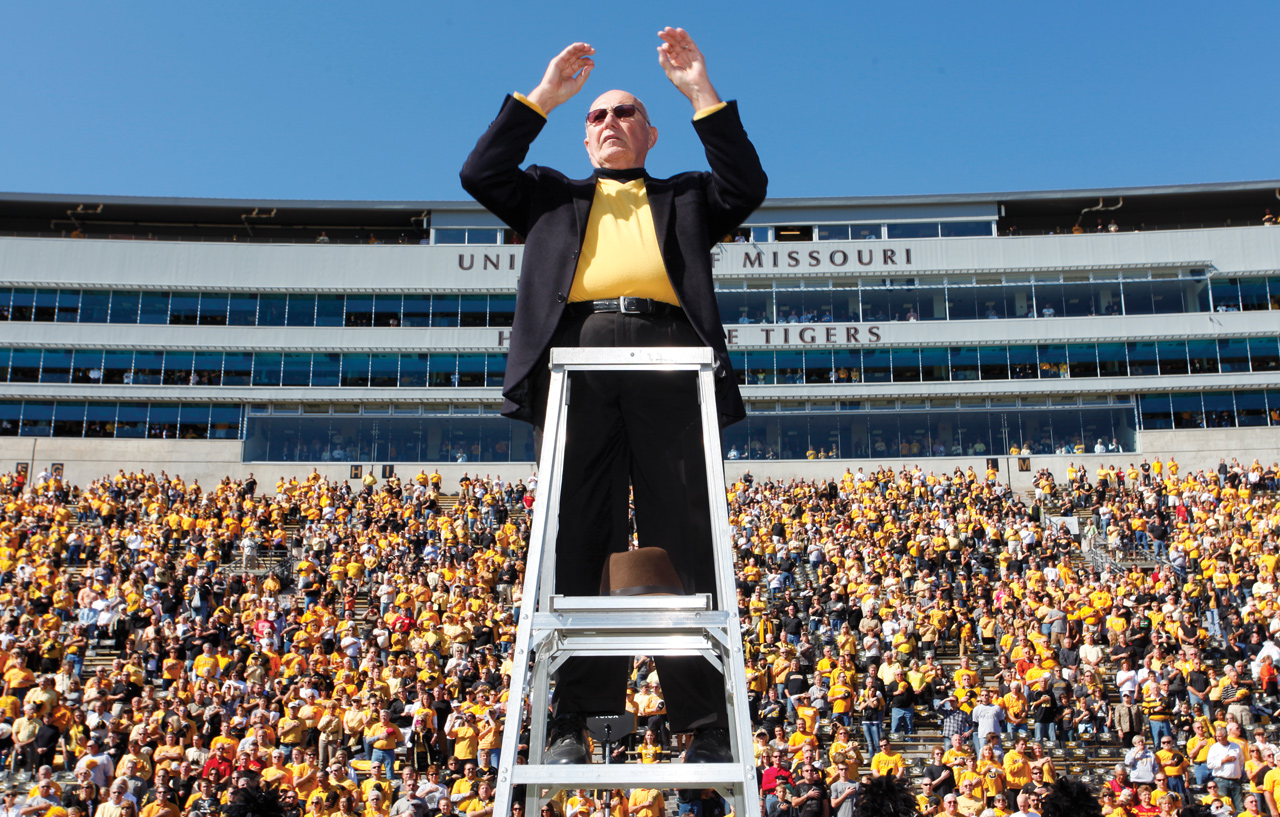 The late Alexander Pickard’s legendary Mizzou career began in 1961 when he started work, fresh from The Juilliard School, as assistant band director and brass instructor. This photo was taken before the COVID-19 pandemic.

In the summer of 1971, Norm Ruebling was new to the ranks of M2, Marching Mizzou. During an 8 a.m. band camp session, the 250-pound freshman percussionist was trying to stand in formation, melting in the sweltering August heat, when he came face to face with the bullhorn of Alexander Pickard.

“Ruebling!” barked the band director into the horn. “You’re not in Troy, Missouri, anymore! Cover down!”

Translation: Line up directly with the people around you. Now!

But Ruebling recalls he had little to go on by way of landmarks.

Ruebling would soon learn what thousands of Tiger musicians discovered between 1961, when Pickard arrived at Mizzou from The Juilliard School, until he retired in 1995: That “Dr. P” was always serious about marching band — and taking care of his “kids.”

“He was not like a Gen. Patton, but more like a confident leader who understood the value of his students,” says Ruebling, who is now a professional drummer, bandleader, and co-owner of MO-X Doc and Norm Direct airport shuttle service. “It was always about the band, not about him. If the Kansas City Chiefs forgot to feed us, he told them we wouldn’t march. On bowl trips, when the higher-ups wanted a scaled-down version of M2, he told them, ‘We all go, or we all stay home.’ We all went.”

After being named director of bands in 1966, Pickard built the university’s marching band into the “Big M of the Midwest,” known throughout the world. On his watch, the band started using the “M-I-Z, Z-O-U” chant that has become synonymous with MU. He came up with the idea of Mini Mizzou and was the first director to have the Golden Girls dance. He led Marching Mizzou to London, where they played at Wembley Stadium for the FIFA World Cup. In 1983, he became assistant chairman of the School of Music.

But Pickard’s legacy truly lives on in the memories of the students he cared for so deeply. “Later that day [at band camp] on a water break, Dr. Pickard comes over and puts his arm around me and says, ‘How are your mom, Ruth, and dad, Ralph, doing?’ ” Ruebling says. “He knew my parents’ names. He met them one time eight weeks prior and remembered their names. He never ceased to amaze me.”