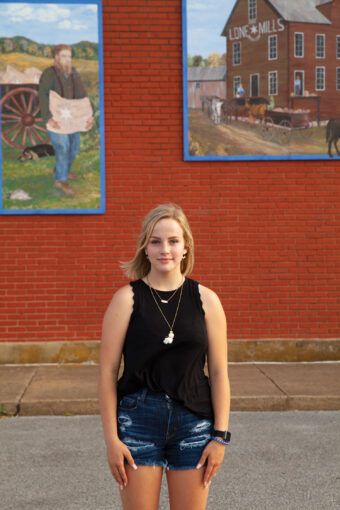 During her high school years in rural Houston, Missouri, Sevanna Rowland’s days started with helping her four younger siblings get ready for school. Then, after finishing her classes, sports and a part-time job, her day ended with relieving her grandmother of babysitting duties.

“Having such a big part in raising my siblings taught me a lot about motherhood. I think it’d be really great to be a mom someday … ,” Rowland says, cutting herself off with a smile, “ … but not yet. We’re going to college.” Now a sophomore, Rowland entered the Trulaske College of Business in fall 2018 with the support of the Heartland Scholars Academy, a four-year scholarship for rural, first-generation business students that provides resources including business lessons, company visits, laptop computers and professional attire.

Many first-generation students from small towns aren’t sure they have what it takes to cut it at a place like Mizzou, both academically and financially, says Mary Beth Marrs, who directs the program. “Our goal is to empower these students with the confidence to realize they can compete with anyone else on this campus, and they can do it well.” The program was established in 2018 with a gift from Irl and Sue Englehardt, BS BA ’75, MBA ’77.

As Rowland begins her third semester at Mizzou, she has begun to envision career possibilities — maybe she’ll go into fashion, maybe in a city much bigger than Houston, Missouri. Rowland’s grandmother Donna Rowland is proud of how she approaches life with her trademark fearless enthusiasm and perseverance. “Sevanna is what she is because of the way her life was, tough as it may seem. It could have broke her, but it didn’t — it made her.”