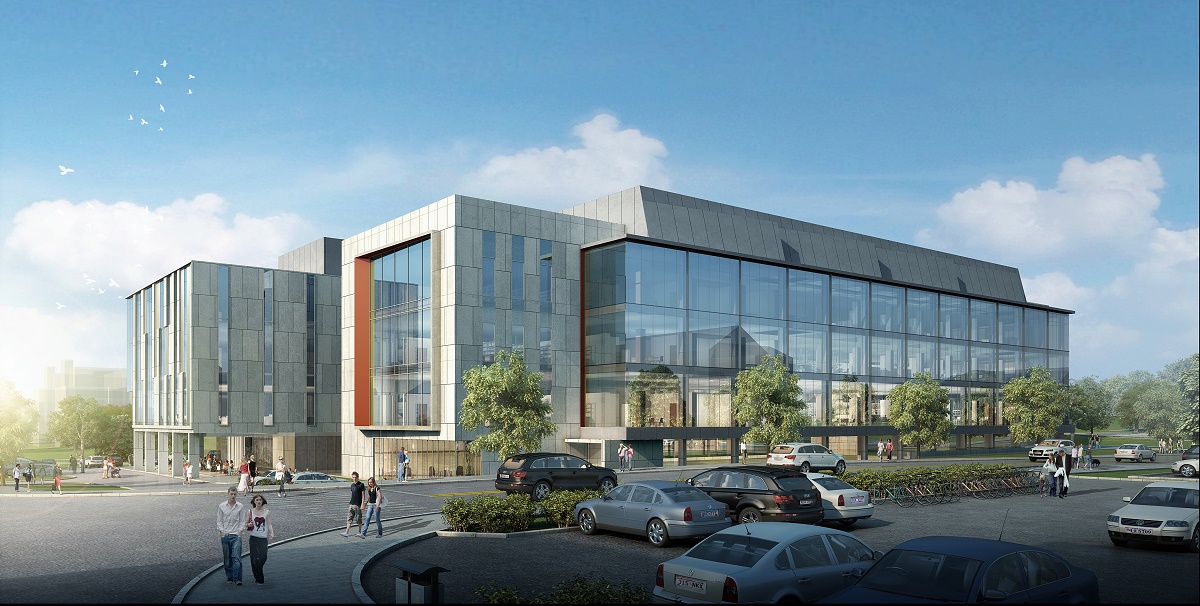 University of Missouri System leaders and state and national officials broke ground Friday on the NextGen Precision Health Institute at the University of Missouri-Columbia, a central facility supporting a systemwide precision health initiative. The event also served as an official launch for the NextGen Precision Health Initiative, which harnesses and supports the research activities of the system’s four universities and health system. The initiative is expected to accelerate medical breakthroughs for patients in Missouri and beyond, increase collaboration among UM scientists and industry partners, attract research funding, generate jobs, and train a new generation of health care scientists and practitioners who will help Missouri address the health care needs of the future.

“Today is an exciting day not only for the University of Missouri System and our four universities, but also for the state of Missouri as a whole,” President Mun Choi said.

“The NextGen Precision Health Initiative will help us translate fundamental research from laboratories to effective treatments and devices, which will benefit all Missourians as well as the rest of the world. As the boldest and most innovative investment in our history, this initiative and facility will stand as enduring symbols of our commitment to the state of Missouri and will advance medical science and our highly skilled workforce for generations to come.”

The approximately 265,000-square-foot, five-story precision health facility will provide space for more than 60 principal investigators, about half of whom will be newly recruited in areas such as engineering, medicine, veterinary medicine, animal sciences, and arts and science. It will be located on the MU campus near University Hospital at the northwest corner of Hospital Drive and Virginia Avenue. State Senator Caleb Rowden said the initiative is one of the most important things MU can and will do for the state and the world.

“Precision medicine has the potential to completely transform health care delivery in this country. The NextGen Precision Health Initiative will accelerate progress toward new medical breakthroughs at this pivotal time in the medical research space,” Blunt said. “One of my top priorities in Congress has been establishing a pattern of sustained, increased federal investment in medical research. I’m proud to see Missouri become home to this brand new facility where students will have the opportunity to work alongside experts and researchers developing new treatments for the most costly and deadly diseases.”

“Missouri’s flagship university — home to the nation’s most powerful university research reactor and 13 schools and colleges across the arts, sciences and humanities — is excited and poised to bring our comprehensive breadth of expertise across disciplines to this innovative research facility,” Cartwright said. During the groundbreaking ceremony Chancellor Cartwright said that cross-discipline research space of this magnitude is rare and will help us tackle grand challenges like treatments for cancer and heart disease.

"This important work will undoubtedly attract federal and industry funding, and bolster MU’s role among America’s leading research institutions while contributing to the economic development of our region and state,” Cartwright said.

The initiative will involve every UM university and be especially impactful for students, who can learn side-by-side with leading researchers.

“The University of Missouri-Kansas City will harness its deep strengths in data science and bioinformatics to collaborate with the NextGen Precision Health Initiative,” Agrawal said. “The outcomes research UMKC is leading is transforming lives, and transformation through research is exactly what this initiative plans to deliver.”

At Missouri S&T, student Carley Hamann is already engaged in experiential learning at the construction site. The senior in mechanical engineering plans to pursue a career in construction and is interning with The Whiting-Turner Contracting Company over the summer, which is part of the NextGen project team. The $220.8 million facility is the UM system’s top capital priority and is funded through a combination of private and corporate support, contributions from MU and the UM system, and the state of Missouri. In FY20, which begins July 1, the state has designated $10 million for the institute.

“I am grateful to the people of Missouri and our elected leaders for understanding the power of this investment,” UM Board of Curators Chair Jon Sundvold said. “I am confident the NextGen Precision Health Initiative will foster breakthroughs that can improve the lives of those in our state and beyond — both improving health care and bringing jobs to our state.”

Elizabeth Loboa, vice chancellor for strategic partnerships and dean of engineering, has served as a leader of the project.

“The NextGen Precision Health Initiative will feature shared facilities that will foster partnerships among researchers of different disciplines and from different organizations and will help us emerge as a global leader in biomedical research,” Loboa said. “It will also greatly enhance our ability to recruit and retain the most talented researchers.”

Last year, an independent study found that the UM System and its four campuses have a $5.4 billion economic impact on the state of Missouri through direct employment, job creation and research funding. The development of the NextGen Precision Health Institute is expected to add to that figure significantly as a catalyst for additional economic growth, said Mark McIntosh, another key leader of the project and vice president for research and economic development at the UM System and vice chancellor for research and economic development at MU. The new building is expected to increase collaboration and train a new generation of health care scientists and practitioners who will focus on address the health care needs of the state.

“This facility will play a crucial role in MU’s future as a transformational leader in improving health by taking advantage of our longstanding culture of multidisciplinary research and integrating biomedical research under one roof,” McIntosh said. “Collaborators will include the best researchers from around the country, including our best and brightest from colleges and schools across the UM System, who will work together to conduct leading-edge research that improves our quality of life.”