When Bolor Altansukh came to MU from Mongolia one month ago to pursue a master’s of science in water resources, she was looking to leave behind a career in the mining industry for a new start in the environmental sector. But despite her enthusiasm, she never expected to be in the same room as Gary White, co-founder of the nonprofit aid organization water.org, only one week later. 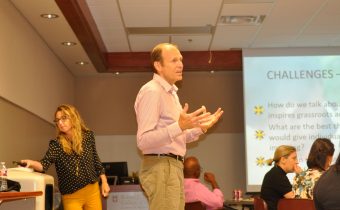 White recently visited the University of Missouri’s Trulaske College of Business to host a competition for students interested in solving the world’s water crises, and Altansukh did more than participate—she was on the winning team.

Students from the College of Business, the School of Natural Resources and the College of Engineering answered the influential entrepreneur’s call to participate in the Innovation Challenge. Like Altansukh, most were meeting their fellow team members for the first time, having been sorted into groups made up of students from all three participating schools.

This was no accident. Annette Kendall, director of the Center for Entrepreneurship and Innovation, said she envisioned the competition as a way to bring students together from different areas of campus with the common goal of helping to solve humanitarian water crises.

For Altansukh, the diverse array of people and ideas was a big draw.

“There were so many students from different fields that everyone had a different perspective,” she said. “The water sector is new for me, and I need to know what is going on around the globe. This event allowed me to learn from others.”

Before presenting the challenge, White encouraged the participants to remember that access to safe, sanitary water is a global challenge with far-reaching impacts. According to water.org, one in nine people in the world live without access to clean water, and almost three times that number do not have a toilet. White and actor Matt Damon created water.org to provide access to clean drinking water in impoverished communities around the world. The organization provides small loans (known as WaterCredit) to people who would not otherwise have the means to install household water and sanitation.

In keeping with the organization’s mission, he offered each team the chance to propose a solution to one of three questions:

The winning team — which consisted of Altansukh, Daniel Hoffman, Luke Eaton, Amber Peterein and Megan Conrad — chose to tackle the question on grassroots action. Whether graduate or undergraduate, and hailing from different divisions on campus, solid teamwork brought the students together to come up with an innovative idea. 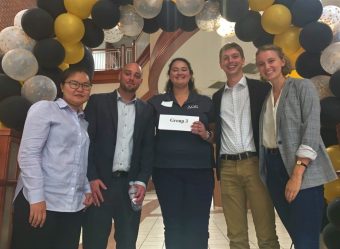 “We were stumped for the first 40 minutes,” said Peterein, a senior majoring in civil engineering. “One of the potential solutions was to have some sort of 'challenge' like the ASL Ice Bucket Challenge, but without wasting so much water. Then one team member suggested that the challenge incorporate the average distance of 3.4 miles that women and children walk to reach a water source. Another pointed out that these women and children also have to carry a 45-pound bucket of water back from the water source.”

Eventually, the team settled on the concept of a race in the vein of Tough Mudder or Spartan Race, in which participants would carry 45-pound weights through the course to simulate one of the burdens faced by people in water-scarce communities. The race would raise awareness and funds for water.org’s mission to bring sanitary water and plumbing to those in need.

“Our group saw the problem as a lack of awareness and information about the water crisis in other countries,” Altansukh said. “In response, we developed a challenge that could be organized almost anywhere and involve people of all ages.”

Finally, after an hour of brainstorming and preparing a proposal, each team presented their idea to Gary White and a panel of judges consisting of faculty from the participating campus colleges. For Hoffman, this was “the best part of the event,” and not just because his team came out on top.

“It is not every day that you get to present your ideas to a co-founder of an organization that is changing the way the developing world accesses water,” Hoffman said. “He was down to earth and definitely challenged the teams to think outside the box.”

The winning team received $25 gift cards, but the team members agreed that the real rewards were less material. Peterein said she relished the opportunity to meet and work alongside people with different skills, interests and career goals.

“While the judges were deliberating,” Peterein said, “ I looked at my team and told them, ‘Regardless if we win or lose, I’ve had a blast working with you guys, and we’re winners in my book.’”

They were winners in White’s book, too, and it just might be that the team’s idea will open a new chapter in water.org’s efforts to inspire grassroots action on water crises.