Many veterans cope with PTSD symptoms and struggle with suicidal thoughts. Illustration by Blake Dinsdale.

The suicide rate among veterans is rising. In a case argued by an MU School of Law alumnus, a federal judge found the Department of Veteran Affairs liable for the suicide of an Iraq War veteran — a case that could be precedential in holding the department accountable for the health of military personnel.

When Angela Drake’s phone rang in her office at the School of Law Veterans Clinic one day in 2017, she was happy to hear Larry McMullen’s voice on the other end of the line. A law school graduate and an ardent supporter of the Veterans Clinic, McMullen had a question for Drake: What do you know about veteran suicide?

Drake directs the clinic, where law students help veterans and their families secure disability benefits. McMullen, BA ’53, JD ’59, practices law with Husch Blackwell and for years has represented physicians accused of injuring patients through substandard medical care. A federal judge had appointed him to represent a family in a wrongful death action against Department of Veterans Affairs (VA) medical providers.

Drake told McMullen what she knew: Veterans suffer a disproportionately higher rate of suicide than civilians. By one estimate, an average of 20 veterans die daily by suicide. Of the veterans who have served in Operations Iraqi Freedom and Enduring Freedom, between 11 percent and 20 percent have post-traumatic stress disorder (PTSD), which research has shown to have a direct relationship with suicide.

McMullen took that information and used it to build his case.

Cpl. William P. Draughon served seven months in the U.S. Marine Corps as a squad leader and machine gunner deployed to combat in Iraq. During his tour, the 23-year-old was exposed to firefights, improvised explosive devices, grenades and land mines. Several members of his squad died. The North Kansas City High School graduate returned to Missouri in 2005 after receiving an award for heroic service and an honorable discharge.

Diagnosed with PTSD the same year, Draughon started treatment at VA medical centers in Kansas City, Missouri, and Leavenworth, Kansas. He reported feeling severe guilt about the loss of troops under his command, being hyper-alert, and hearing explosions, choppers and screaming in his head. Over the next few years, Draughon drank heavily to cope with his PTSD symptoms and struggled with suicidal thoughts. 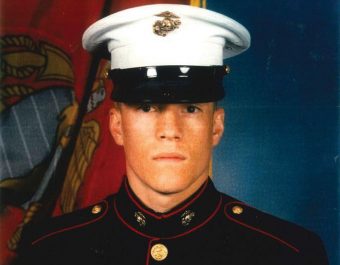 After serving as a U.S. Marine in Iraq, Cpl. William Draughon struggled with PTSD. He killed himself in 2010. In 2018, a judge ruled that health care providers’ negligence contributed directly to his death. Photo courtesy Larry McMullen.

Believing the VA had been negligent in its care of Draughon, his father sued. Kansas U.S. District Judge Julie Robinson appointed Husch Blackwell attorneys, including McMullen, to represent the father. “I suspected one of the reasons she did that was because she thought if I had spent so much time defending doctors, I’d probably know how to make a case against a doctor.”

She was right. McMullen and his assisting attorneys Michael Raupp and Christina Pyle showed that the hospital had flagged Draughon as being a high risk for suicide during a hospitalization in September 2009. However, exactly 90 days later, a suicide prevention coordinator removed the flag from his electronic medical records without explanation. No clinical review or risk assessment was completed before determining that it should be removed.

The attorneys also provided evidence that the hospital failed to follow up adequately with Draughon after his discharge from a substance use treatment program in January 2010. Had he remained on the high-risk list, hospital policy would have required weekly appointments with his mental health provider for at least 30 days, continuing monitoring for suicidality and follow-up for any missed appointments. Draughon missed an appointment shortly before killing himself.

“We were not claiming that the doctors were bad doctors,” McMullen says. “But they weren’t following him carefully enough to detect and appreciate the signs that he was likely to hurt himself. We believed that the policies were adequate. The failure of the medical staff to see that the policies were followed was the critical part of the case.”

The judge ruled that negligence directly contributed to Draughon’s suicide and in July 2018 awarded damages totaling more than $480,000 to Draughon’s two children, father and biological mother.

“For many veterans, VA health care is the only option to secure the help they desperately need,” Drake says. “Thanks to the outstanding legal work done by Larry and his team, the Draughon case established that VA health providers may be held accountable under the law where there is a failure to properly care for those who bore the battle.”

McMullen attended Mizzou on a U.S. Navy ROTC scholarship and served three years as an officer on minesweepers in the Pacific Ocean. “Being in the Navy was a very valuable experience for me,” he says. “I got a lot of responsibility early in my career. When I came back to law school, I had grown up a lot. The law school gave me the opportunity to learn how to live a life of helping people. That’s what I’ve tried to do.”

Chancellor Emeritus Brady Deaton says it was veterans like McMullen who inspired MU to establish the Veterans Center on campus in 2007. “Larry’s devotion to our country is not unlike his devotion to the university,” says Deaton, who worked closely with McMullen when he served as a tri-chair of the $1 billion For All We Call Mizzou fundraising campaign. McMullen also has served on the One Mizzou campaign planning committee and as an adjunct professor at the School of Law.

“You ask Larry to do something, and he’ll say yes before you can fully explain what you’d like him to do,” says former law dean Lawrence Dessem. “But the one person who would never talk about Larry is Larry himself.”

Indeed, McMullen praises his associate attorneys for the success in court, where Pyle presented the opening statement and Raupp delivered the closing argument. For McMullen, all the credit goes to his late wife, Marilyn Lacey, BS Ed ’54, who said at the beginning of their 53-year marriage, “You should give law school a try.”