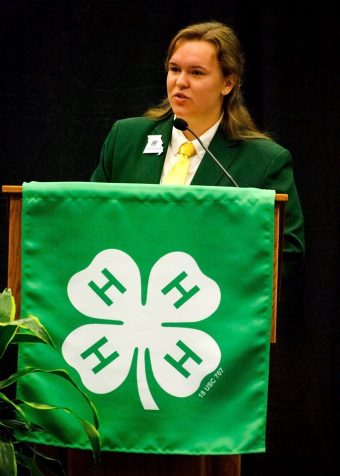 The University of Missouri has a president in its midst. She won’t be making international peace agreements or signing bills into federal law, but she has many talents thanks to Missouri 4-H — one being how to manage a pig farm.

Heather Snow, a freshman animal science major and president of Missouri 4-H, feels fairly comfortable on campus since she grew up only 20 minutes south of Columbia. However, she has Missouri 4-H to thank for feeling especially confident about being a Tiger.

Missouri 4-H is a youth development program for Missourians who are 8 to 18 years old. The program encourages children and teenagers to develop skills in areas such as agriculture and fine arts while receiving mentoring to become leaders and advocates in their communities.

For Snow, 4-H inspired her passion to study animal science and gave her experience in the field since one of her first projects was to raise a baby pig. Several of the 4-H events she planned and attended took place on campus, so learning how to navigate campus was a breeze. Now, returning from a 4-H Exchange trip to Costa Rica as the president of Missouri 4-H, Snow has developed leadership skills and cultural awareness that have enriched her college experience.

“Pretty much on every level, 4-H has prepared me for college life,” Snow said. “I really like it here at Mizzou, and they offered me the best financial package possible, so coming here seemed like a no-brainer.”

Snow didn’t join 4-H with the intention of becoming president. Her mother was the one who signed her up when she was 9 years old. When Snow and her family settled in Boone County after moving around the country, her mother thought having Snow join 4-H was a good way to make friends. In fact, Snow’s mother had been in the same club when she was growing up in Columbia.

“During the meetings, I would just sit in the back, and not make a single peep the whole time,” Snow said. “I started out because my mom signed me up, but it blossomed from there. I really fell in love with it.”

In addition to caring for animals, Snow learned about parliamentary procedures and public speaking. For example, she developed interpersonal skills and learned how to effectively communicate her ideas to others. Snow works with her executive board to promote Missouri 4-H to state leaders, including Missouri Governor Mike Parson.

Snow’s love for 4-H eventually led her to serve as a regional representative for her junior and senior years of high school. This past fall, she threw her name in the hat to serve on the state executive board as Missouri 4-H president.

“It definitely gives you a different perspective when you’re campaigning and trying to be authentic to yourself but also make people like you at the same time,” Snow said. “I thought to myself, ‘Wow, I need to be this person 100% of the time. The person that I am when I’m campaigning, I want to be her all the time.’”

Her hard work and dedication earned her the role of Missouri 4-H president and since June, she has been using the position to promote Missouri 4-H to leaders in the state. She wants campus leaders and others to know how much of an impact 4-H can have on youth. In the beginning of September, she attended the Chancellor’s Tailgate with MU Chancellor Alexander N. Cartwright to do just that.

Taking 4-H wherever she goes

“I want to make sure I’m leaving a positive image of 4-H, especially since some of the people I met at the tailgate hadn’t really encountered 4-H or thought of the program as a part of the University of Missouri and MU Extension,” Snow said. “It’s really important for us as an executive council to advocate for teenagers in 4-H and bring the program’s opportunities to light.” Snow was glad to meet MU Chancellor Alexander N. Cartwright and share with him the ways Missouri 4-H benefits youth.

Throughout her time in 4-H, Snow has been a counselor for 4-H camp, attended national congresses in Atlanta and presented at the Missouri State Fair. She used her connection with MU Extension to create and host an event at her high school called Student Professional Development Day. Students took a half-day at school to attend “adulting” sessions with topics such as filing taxes, interviewing skills and interacting with people with disabilities. This summer, Snow traveled to Costa Rica to see what 4-H looks like there.

While she was surrounded by Hispanic culture, Snow realized some of the key differences in the way 4-H (called 4-S in Costa Rica) is run. 4-S focuses on civic involvement and community engagement more than agriculture, she said. Participants do more activities associated with protecting the environment and engaging in political movements. Also, the program in Costa Rica is a more integrated school program, with some of the classes taken throughout the day being geared toward 4-S concepts. Snow enjoyed how international exchange program exposed Missouri 4-H to similar programs all around the world.

“I’d always imagined what being in a different country would feel like, but it’s still mind boggling to me,” Snow said. “You don’t get that opportunity to be immersed in a brand new culture very often, and it was an amazing experience.”

As president, Snow wants to increase attendance at state events and make them more inclusive. She looks forward to endowing a fund that the state council has been raising since 2015 that will be used as financial assistance for members of 4-H to attend those events.

“The beauty of 4-H is that it can be as much or as little of a commitment as you want it to be,” Snow said. “You can develop who you are as a person, a leader and a citizen. I would be completely different without 4-H, and I see it working in other youth. We are definitely the future of the 4-H program and of the nation in general.”

As her time in 4-H is nearing its end, Snow feels nothing short of satisfied with her experience, especially now that she has seen the impact of 4-H in another country.

“At the end of our pledge, we say, ‘For my club, my community, my country and my world,’” Snow said. “Now, I feel like I’ve reached everyone one of those levels. I’m ending my 4-H career, and I completed the pledge.” Snow with her host family in Costa Rica.