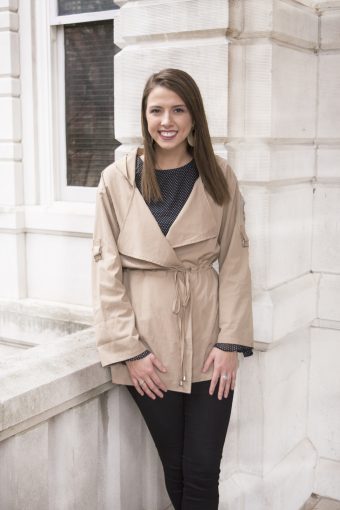 March 23, 2018
Story by Marcus Wilkins
Bailey Lawson, a senior from Columbia, is a fourth-generation Tiger majoring in hospitality management.Bailey Lawson thought she knew everything about Mizzou. A student at Rock Bridge High School in Columbia and the daughter of Mizzou alumni, she had heard the Columns’ history, memorized the lyrics to “Fight Tiger” and chased after Homecoming parade candy as a kid on the streets downtown.

But nothing prepared her for “that feeling.”

“I thought going to college in Columbia would be exactly like what I had grown up with,” says Lawson, a hospitality management major. “But Mizzou felt different. It was like a city within a city with all these new things to explore.”

Lawson’s academic path began, in a sense, at the Columbia Area Career Center, where she took cooking and baking classes for high school credit. When it was time to pick a college, she explored culinary schools in Denver; Charlotte, North Carolina; and Providence, Rhode Island. As fate would have it, home was home.

“They were small schools, and I wanted the big university experience with football games and everything,” Lawson says. “My mom showed me around MU’s campus and shared her memories. She said, ‘That used to be a McDonald’s, and that’s the fountain where your dad and I sat and talked.’ ”

Lawson got involved right away at Mizzou. She pledged Chi Omega, studied abroad in Italy, took a gig as a campus tour guide in the Office of Admissions and joined the planning committee for MizzouThon, an annual dance marathon fundraiser to benefit MU Children’s Hospital. The event captured her heart, and she is even pondering a career coordinating nonprofit events.

Lawson credits Mizzou’s myriad options for keeping her eyes open to new opportunities. And although she regularly visits home down the road for a family meal or a load of laundry, she’s perfectly comfortable on campus.

“I hardly ever leave,” Lawson says. “You can look at a pamphlet and see that the Columns are really cool, or that Jesse Hall is really tall and beautiful, and it all looks like fun. But getting on campus, walking around and actually picturing yourself here — that’s the magic that Mizzou holds."