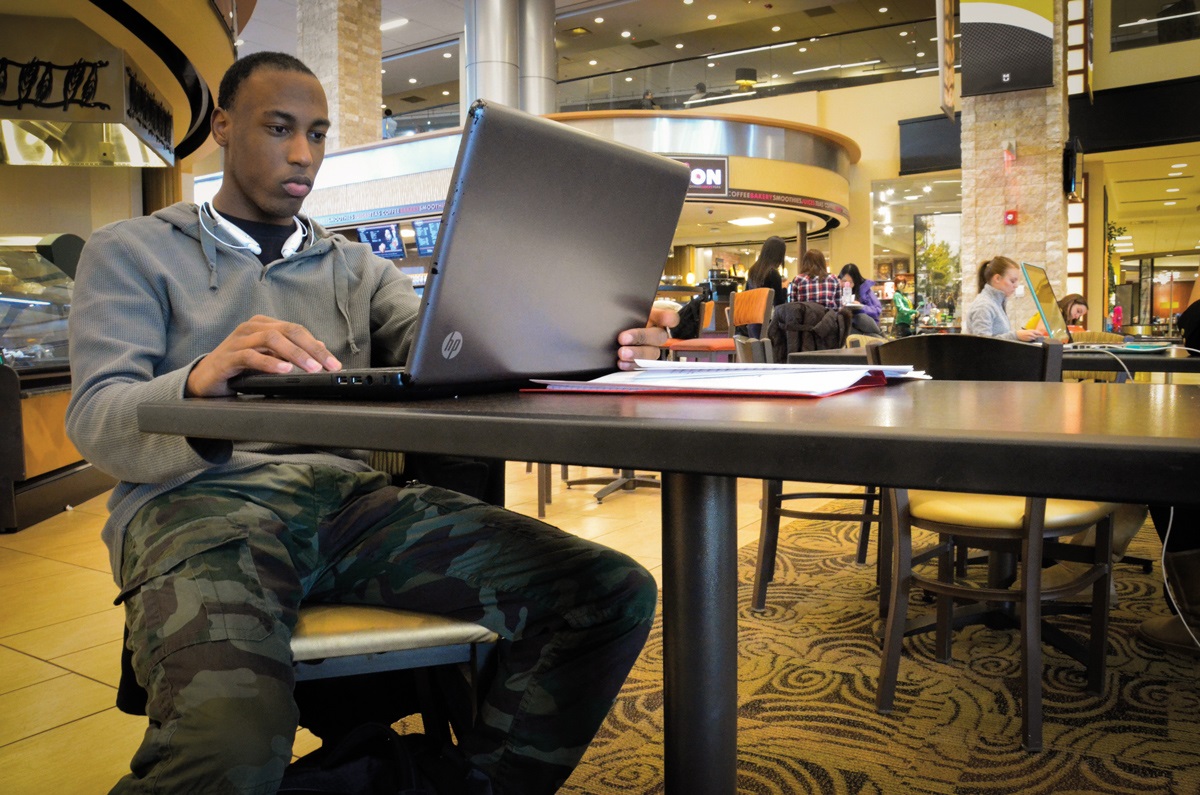 Jean Whitley’s life has never been typical. Born three months premature, Whitley, BS Acc, M Acc ’17, spent his first weeks in a neonatal intensive care unit, his mother by his side. For the first few years of his childhood, he wore an oxygen mask and toted around an oxygen tank. The device was cumbersome. It made field trips, park trips and any other kind of travel difficult. But Tracy Randolph was determined. She refused to let an oxygen tank keep her son from doing things he wanted to do. Whitley’s memories are full of her making time for him. They loved to read together. She’d read to him and make him read to her. She always encouraged his education. By the time he got to high school, he was a good student, and she had a good job as a sales supervisor for AT&T in Kansas City, Missouri. But in the consolidation after SBC bought AT&T, Randolph lost her job. The economy was in recession. Eventually, she lost the home Whitley had grown up in, and they moved into her sister’s basement for about a year while she looked for work.

Randolph is a proud person, and it was hard for her to admit what had happened. Whitley saw her stress—providing for him, not burdening her sister, all while looking for a job to replace her old income—and hated that he couldn’t stop it.

During high school, Whitley took two accounting classes and joined the school’s chapter of DECA, a national organization of student clubs that hold business, marketing and accounting competitions. He did well in the accounting contests and advanced to the state level.

When it came to picking a college major, the choice was obvious.

Then his mother, who was now working as a sales supervisor for TimeWarner Cable, lost her job again when the company closed its offices in the area. Whitley, who did not own a car sophomore year, takes a bus from campus to work. Photo by Shane Epping

“I’d seen how my mom reacted before, and I knew she wouldn’t tell me if it got that bad again,” Whitley says. It was his turn to be determined. He would not let his mom become homeless another time. And now, unlike in high school, he could do something about it.

Whitley lived off campus and worked in the Rollins Dining Hall. He didn’t earn much, but he sent his mom everything he could spare—and some of what he couldn’t. His bank transfers kept her afloat, but by the second semester of his sophomore year, he was falling behind on his bills, and his grades were sinking.

Whitley couldn’t afford a car, so each night after his shift ended at 1 a.m., he’d walk more than three miles home down Columbia’s Old Highway 63. There were no streetlamps for long stretches. He used the flashlight on his cell phone to make his way down the dark street.

One day, he arrived home to find an envelope taped to his door. He pulled it off and stepped inside. Standing in his studio apartment, he gingerly unfolded the piece of paper inside. It said he had three days to make a rent payment or face eviction. He sat down and cried. He didn’t know what he’d done wrong or how to make it right.

That’s when a friend told him about the Vasey Academy in the Trulaske College of Business. Established in 1997 through a gift from Roger and Sandy Vasey, the academy is a selective program for minority students. The Academy offers a one-credit course on business and the economy, and it explores academic avenues into the business world. And, important for Whitley, it comes with a one-time $1,000 scholarship.

It was exactly the helping hand he needed. The scholarship paid for nearly three months of rent. He made arrangements to pay the rest, including late fees, and stay in his apartment. With Jean’s help, his mother never lost her apartment, and in less than six months she found another job.

That summer, he was accepted for an accounting internship in Kansas City with EY, formerly Ernst & Young, one of the world’s four largest accounting firms. The internship was well paid, and it kept Whitley solvent. He repeated the internship after his junior and senior years as well. Whitley graduated in May 2017 with bachelor’s and master’s degrees in accounting.

In October, he started at EY full time.

“After that rough patch sophomore year, I’ve been pretty blessed,” Whitley says. And in a way, it was the rough times that prepared him for the good. “I’m not going to say it was good that it happened, but I had to learn a lot about finances. I don’t want to experience that again, so I do a lot of planning and saving. I learned to have a plan in place, and a backup plan and a backup to the backup plan.”

He also learned the importance of seeking opportunity. The Vasey Academy gave him knowledge. It saved him from eviction. It even introduced him to EY when company recruiters visited his Vasey class. But all that would have been meaningless had he not taken action. “Every time they came to campus, I went to their table, talked to them and asked about opportunities,” says Whitley, who even visited recruiters in the company’s St. Louis office. “They knew my face.”

As a senior, Whitley got a chance to thank the donors who saved him from eviction when Daryl Smith, who directs the Vasey Academy, invited him to a Trulaske College of Business donor event in Naples,Florida. Roger and Sandy Vasey would be attending. It was a banquet-style event at a country club. During lunch, Whitley and another student shared the stage while Smith asked questions about their time at Mizzou and the Vasey program. Whitley talked about his sophomore year, tears falling when he recounted how, in trying to save his mom from homelessness, he had faced it again himself.

“I told them that without the scholarship I don’t think I would have been able to stay at Mizzou—I wouldn’t have had the money to stay.”

Whitley’s circumstance was not typical, but neither was it unique.

“Financial issues just come,” he told the audience.“It’s hard to mitigate them when you already don’t have enough resources. So continue to be a supporter of students because there are a lot of people like me who didn’t have that opportunity before and still don’t.”

After telling his story, Whitley stepped down from the stage and took his seat at a banquet table. Later, the Vaseys came by and gave him a hug, "they gave really good hugs,” he said.