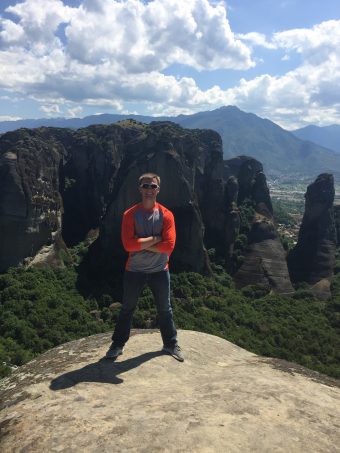 Senior Andrew Liaromotis jumped at opportunities to expand his world view while studying at Mizzou, including studying abroad in Greece.

At first, Andrew Liaromatis wanted to major in journalism. But after an internship with a local newspaper in high school, he realized it was not what he wanted to pursue. Having already committed to Mizzou, Liaromatis still decided to come to Columbia because he wanted to experience a new culture that was different than the one he grew up with in Wilmington, Illinois. Knowing that Mizzou was full of opportunity due to its size and vast amount of majors offered, Liaromatis looked forward to the freedom to follow his passions.

“Mizzou has made me expand my critical thinking skills as well as my perspective on so many different aspects of life,” Liaromatis said. “I have learned how to network, expand my horizon and reach for the dreams I have always had all while doing things I am passionate about.”

One of Liaromatis’ favorite college memories was studying abroad in Greece. There, he not only got to see the historic beauty of southern Europe, but was also able to meet his extended family as well.

“I would not have been able to study abroad without the help of amazing professors and advisors in the undergraduate arts and science program,” Liaromatis said. “They helped guide me through the process of financing international travel.”

Liaromatis currently is majoring in english, mass media communication and classical humanities. He also is minoring in anthropology.

In addition to going to school, Liaromatis has been working as a service captain with the University Club for the past four years. He also is currently in the Marines officer program and plans to serve in the Marines for four years when he graduates in May. After his service, Liaromatis intends to go back to school in pursuit of a graduate degree.

“I have learned that the world is full of opportunity and promise if you are willing to step outside your comfort zone,” Liaromatis said. “Growing up in such a small, sheltered community I didn’t have much knowledge of what the real world can offer. At Mizzou, I have learned about cultures I never would have known about and have written research papers with professors about social issues that drive the world.”

In between school and work, Liaromatis still finds time to be involved on campus and in the community. A passionate Chicago Cubs fan, Liaromatis has participated with the club baseball team for the past four years. He also is the treasurer of the Intercollegiate Communication Organization of Mizzou (iCOM) and volunteers for programs such as Big Brothers Big Sisters of America and Toys for Tots.

“Jump at every opportunity you are offered,” Liaromatis said. “Even if it is something you are unsure of, the odds are that it is going to change you and make you grow as an individual.”