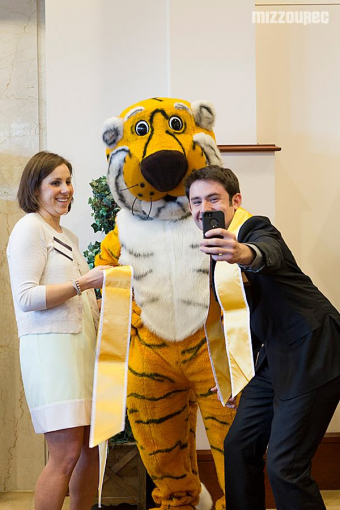 During her 10 years at MizzouRec McElwain created the criteria for wearing a Team Mizzou sash at graduation. A Team Mizzou member models the sash with Truman's approval.

When Emily Bach McElwain came to Mizzou for summer welcome in 2000, she immediately took note of campus recreation as a potential career. McElwain had been a lifeguard and swim instructor throughout high school, and she hoped to do something similar in college.

“Little did I know that my 15 minute chat with Mizzou alumna Carolyn Catenhauser would lead to a professional career in collegiate recreation,” McElwain said.

As an undergrad, working for the MizzouRec was what McElwain was known for around town.

“I was known as the ‘Rec Center girl’ everywhere I went in Columbia,” McElwain said.

She was proud of the nickname. When McElwain returned to Mizzou for graduate school in 2007, she became MizzouRec’s executive assistant.

“At the time, I believed it was only a short-term career move to take advantage of the tuition assistance benefit as I pursued my master’s degree in education,” McElwain said.

She ended up staying for ten years. During that time McElwain helped grow the Team Mizzou Scholarship Program, supported scores of students through their undergraduate years and created the criteria for wearing a Team Mizzou sash at graduation.

After 10 transformative years, McElwain has now moved on to become the director of student recreation at Colorado State University–Pueblo. But she’ll always be a Tiger at heart.

“I am proud to be Team Mizzou Made!” McElwain said. “I would not be where I am today without the academic, professional and personal development I gained at the University of Missouri. Once a Tiger, always a Tiger!”