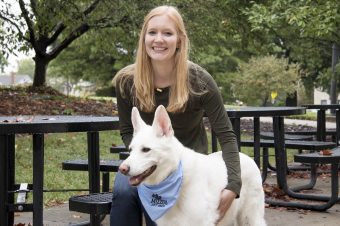 Lauren Panasevich always knew she wanted to advocate better dietary habits to her patients—it’s just that now, instead of counseling two-legged clients, she’s added their four-legged pets. Panasevich, a third-year vet student at the MU College of Veterinary Medicine completed her bachelor’s degree in animal science and her doctorate in nutrition sciences at the University of Illinois; however, it was an opportunity “across the pond” that would lead her to Mizzou.

“Toward the end of my doctoral program at Illinois, I was selected for an internship at the Waltham Centre for Pet Nutrition in England,” Panasevich said. “While at Waltham, I was able to see first-hand how they conduct companion animal diet research; I was hooked—my human and animal nutrition worlds collided. I came back from England and told my advisor that I wanted to go to vet school.”

At first, Panasevich wasn’t planning on Mizzou—she thought she’d stay in Illinois. She ended up applying because of proximity, what she found was that Mizzou was different.

“I came for my interview and found such a welcoming atmosphere,” Panasevich said. “In the hallways, visitors are greeted by photos of students, staff and faculty with their pets—it was just so homey and not at all clinical. The people here are so nice, and I got really excited.”

The information session was inviting and welcoming, but what sold it for Panasevich was that Mizzou has a clinical nutrition program, or as she puts it, “people who actually care about nutrition.”

Panasevich’s nutrition mentors include Robert Backus, associate professor of veterinary medicine and surgery, and Tabitha Hookey, a nutrition resident at the CVM. Together, they guided Panasevich on a competition she spearheaded: “Mizzou’s Biggest Loser.”

Students, staff and faculty at the Vet School volunteered nine cats and five dogs that participated in a six-month weight loss challenge hosted by Nestlé Purina. MU’s clinical nutrition service and Panasevich provided guidelines and nutrition counseling for the pet owners as well as a special diet. Participants were weighed and health assessments were performed monthly to monitor progress.

All 14 participants lost weight during the challenge. The “top dog” lost 27.8 percent of his body weight while the top cat lost 24.1 percent.

“The challenge was a great way to see how clinical nutritionists help people and pets in their quest for better nutrition,” Panasevich said. “I was able to apply my nutrition background to my counseling skills—it was just a good way to marry the two.”

But it’s not just about losing weight. Panasevich knows that nutrition affects so many different diseases, both in four-legged pets and their two-legged owners. She knows that in diseases such as cancer, good nutrition and responsible diet choices that she used to suggest to human patients directly translates to companion animals.

“There’s a lot of information out there on the internet,” Panasevich said. “As a future vet, it’s my responsibility to know the different trends and how to relate those trends to good choices for pet owners.”

Panasevich credits the caring faculty and staff for her success at Mizzou. She points to the open-door policies of faculty as well as the genuine caring nature of administrators for helping her to thrive. Following her clinical rotations and graduation, she plans on working at a veterinary practice and then perhaps a transfer to a role in the pet food industry.

“While going through the application process, I compared all other vet schools to Mizzou; I couldn’t get it out of my head,” Panasevich said. “What I found was that Mizzou feels like home.”

University of Missouri supporters celebrated the successful conclusion of the "Mizzou: Our Time to Lead" campaign and its record-breaking $1.41 billion total.

UM Board of Curators approves the naming of the Michael A. Middleton Center for Race, Citizenship, and Justice

The center, rooted in interdisciplinary research, will promote diverse research and engagement in critical conversations about race, citizenship and justice.