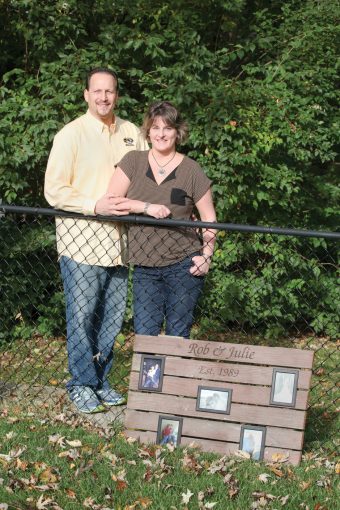 Rob and Julie Ellis shared their first kiss on the Lathrop Hall balcony. Decades later, when their daughter, Natalie, learned the building would be demolished, she secured piece of history for the legacy lovebirds.

Ah, balconies. Throughout literary history, their romantic influence has been undeniable. When Romeo, from the orchard below, bade a swooning Juliet “Arise, fair sun,” surely the altitude added a few beats to her already quickened pulse.

So it was for Rob and Julie, Mizzou undergraduates in 1985 who met in tennis class after each one’s playing partner fatefully dropped the course. The friends soon became something more, eventually sharing their first kiss on the sixth-floor balcony of Lathrop Hall, where Julie lived.

Twenty-nine years later, Rob Ellis, BS Ag ’87, and Julie Konrad Ellis, BA ’89, re-enacted the moment on camera while visiting their eldest, Natalie, a Mizzou student. During Natalie’s time at MU, she learned some hard news about her parents’ love nest. “When I heard they were demolishing Lathrop, I emailed res life to request a piece of wood,” says Natalie, one of three Ellis daughters and a senior majoring in elementary education. “In my head, I was picturing a single plank.”

But Jack Woodbury, a building supervisor for MU’s Department of Residential Life, had other ideas.

He acquired a welcome-mat-size rectangle of decking from the exact location of the sentimental smooch. With the help of Arch Engraving in St. Louis, Natalie assembled a 27th-anniversary gift for the ages, complete with affixed wedding and vacation photos.

“As soon as I opened it, I was stupefied,” Julie says. “Then Natalie asked, ‘Mom, do you recognize … ’ and before she could even finish, I said ‘Oh my gosh, this is the wood from the deck!’ ”

As 1980s alumni can attest, their decade’s haunts and hangouts are fewer and farther between. Katy Station, the site of Rob and Julie’s first date, has been revamped into Shiloh Bar and Grill, and the once-elegant Haden House, where Rob proposed, sits unoccupied on Highway 763.

“I found the girl of my dreams. From the minute I saw her in class, I had my eye on her.”
- Rob Ellis on Julie Ellis

Natalie is set to graduate in May 2017, and the Ballwin, Missouri, couple has by now taken many a hand-in-hand stroll down their old college town’s memory lane. As Rob says of his lifelong doubles partner, “I found the girl of my dreams. From the minute I saw her in class, I had my eye on her.”

Shakespeare said it, too — “Who ever loved that loved not at first sight.”