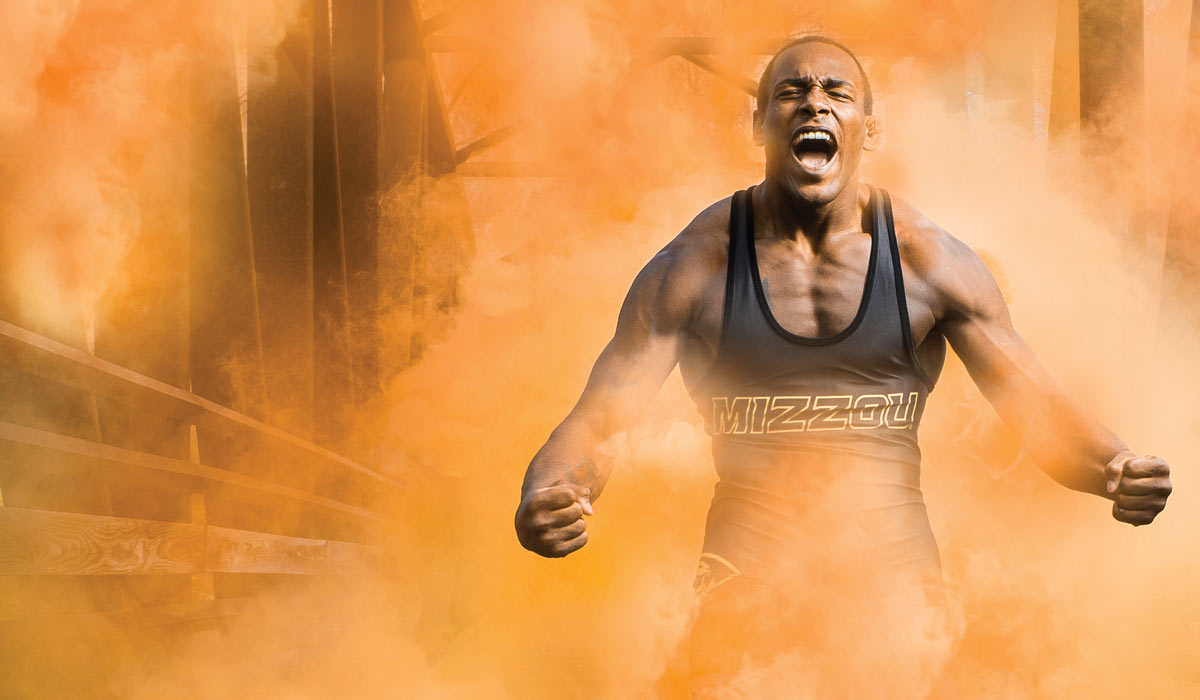 J’den Cox, a 197-pound senior, takes on his teammate, freshman Jake Bohlken, at the Black and Gold dual where Cox led the Gold team to a 27-21 win, Nov. 3 in the Hearnes Center.

“Hero” gets thrown around a lot in the sports universe. World Series-winning RBIs, buzzer-beating 3-pointers and excitable broadcasters elevate mortals to god-like status in the blink of an eye. Etymology tells us the word’s ancestral hērōs comes from the ancient Greeks, the same folks who brought us the Olympic games. Mizzou wrestling star J’den Cox claimed bronze at this summer’s installment in Rio, and while it might have earned him “Olympic hero” status, the term seems hyperbolic when compared to his deeds a few days later back home in Boone County.

After witnessing a motorcycle crash south of Columbia, Cox ran to the scene and pulled off his newly issued Team USA T-shirt to suppress bleeding from the victim’s head while waiting for the paramedics.

“The bike skidded, came up off the ground and flipped over him,” says Cox, who, in the moment, tossed aside the crutches he’d been using following knee surgery. “I could see his face, I could see blood, and when I looked him in the eyes, I thought he was dead.”

The man survived, and the courageous act has only added to the legend of the two-time NCAA champion, three-time All-American and four-time prep state champion from Columbia’s Hickman High School.

“Sometimes you have to react instead of processing and thinking everything over,” Cox says. “You have to say, ‘I don’t know where this will lead us, but we are going to go down this path even if we have to bust through a brick wall.’ ”

By any standard, J’den Cox is a winner.

Before claiming his medal Aug. 20, 2016, with a victory over Cuba’s Reineris Salas Perez in Rio de Janeiro, Cox already owned the best win percentage (.955, 108-5) of any Mizzou wrestler with at least 100 wins. He was also the fastest to 100 wins, accomplishing the feat in a mere 105 matches.

But it is his attitude following rare defeats that defines him as a competitor. After falling to Turkey’s Selim Yaşar in the Olympics semifinals — a match Cox didn’t realize he was losing in the moment because of his unfamiliarity with the international scoring system — he superhumanly transcended disappointment.

“I didn’t know I was still down,” Cox told reporters. “That’s just a learning curve. I wish I would have learned earlier, but I’ve still got another match, and I’ve got to prepare for that. Can’t linger. Gotta keep going.”

Cox’s bronze-medal match with Perez also featured a confusing twist. With six seconds remaining, Cox’s coaches protested what should have been scored a takedown in the American’s favor. When the call was corrected to give Cox the lead, Perez’s corner angrily erupted, and the Cuban refused to return to the mat, thus forfeiting.

Cox’s ensuing tearful celebration with his family became an indelible memory for Mizzou wrestling fans. Yet he recalls the rapturous moment with an analogy about its inevitability. “I have done this my whole life,” says Cox of his sport. “So when the door showed up, I just walked through.”

Cox has returned for his senior year in 2016–17 to lead the Tigers, who rank No. 5 in national polls at press time. Mizzou is the only SEC school with a wrestling program, so the team competes in the Mid-American Conference (MAC), which the Tigers have dominated since joining in 2012. Their streak of consecutive conference titles stands at five and dates back to Mizzou’s final year in the Big 12.

The secret to Missouri’s mat mastery is an overarching philosophy called Tiger Style. Developed by Coach Brian Smith and based on four core themes — Believe, Compete, One More and Expect to Win — Tiger Style is a mindset that encourages a commitment to excellence in athletics and in life.

Brian Smith began his career as Missouri’s seventh head wrestling coach in 1998.
The winningest coach in program history, Smith has compiled a 237-92-3 record at Missouri over his 18-season tenure. Smith has taken home five consecutive conference Coach of the Year honors dating back to 2012, including four straight awards by the MAC league office. Additionally, in May 2007, Smith was honored with the Dan Gable Coach of the Year Award, presented by W.I.N. Magazine.

“Our sheet of team rules simply says ‘Go to class’ and ‘Live Tiger Style,’ ” says Smith, who enters his 19th season at Mizzou. “If you do those two things, you are going to have success.”

The lifestyle so influenced Cox that he wrote the original song “One More,” about the importance of extra effort, and performed it at a kick-off event for the Mizzou: Our Time to Lead fundraising campaign in October 2015. Connor Flynn, a 165-pound sophomore, works out on an elliptical machine in the wrestling room near the end of practice. Flynn placed fourth at the 2016 Big 12 Championships before transferring from West Virginia University to Mizzou.

“My motto is ‘Live day by day, and be the best you can be for that day,’ ” says Cox, who is majoring in psychology. “I know it is a simple one, but it’s the one that works for me.”

Cox takes that mentality to the training room every day, and in August, he announced he will consider trying out for Mizzou football in 2017.

“I have an extreme motivation to enjoy what I’m doing,” says Cox, who was an All-State linebacker at Hickman. “Whatever I do, whatever I put my heart into, I look to be the best I can possibly be.” Mizzou wrestlers take pride in their intense competitive fire. Swing by the wrestling facility in the Hearnes Center any given day and you might find the team warming up by playing dodge-, whiffle- or kick ball. Smith also employs elements of CrossFit training, asking wrestlers to heft logs, flip tires and bear crawl while carrying teammates up the north hill at Faurot Field. “There’s a lot of accountability on this roster, and we all really get along,” says Lewis, the 2016 MAC freshman of the year. “It helps me as a person. It helps with stress just being around a great group of guys.” Joey Lavallee, a 157-pound redshirt junior, jumps rope outside of the wrestling room. Lavallee is a 2014 and 2015 NCAA Championships Qualifier, as well as a member of the 2014 SEC First-Year Honor Roll and 2015 Academic All-MAC Team.

“I’ve been around Tiger Style since I was little,” says Eierman, who wrestles at 133 pounds. “Mizzou already felt like a second family to me.”

“We’ve only had one finalist each year at the NCAA finals,” says Smith, who believes his team can find the podium at the 2017 NCAA Wrestling Championships March 16–18 at the Scottrade Center in St. Louis. “We’re going to need three or four guys in the finals to win the national team title.” Barlow McGhee, 125-pound redshirt junior, completes a set of dead lifts in the Mizzou weightlifting room. Barlow is a 2014 SEC First-Year Honor Roll member and a 2016 MAC Champion. He fell one win short of All-American status at the 2016 Championships in New York City.

The Tigers hope to ride the wave of wrestling enthusiasm surrounding the team’s successful 2015–16 season and Cox’s bronze triumph. Meanwhile, recruiting continues to boom. Mizzou introduced a 2016 class in which each wrestler has won at least one individual state championship or one high school national championship.

The next step, Smith says, is ramping up fan support. The Tigers upended Virginia Tech in a dual meet Nov. 20, 2016, at Jesse Hall, improving to 2-0 on the young season. Cox sealed the meet by defeating Jared Haught, the No. 3 wrestler in the country for the Hokies.

The Missouri superstar was ranked No. 1 at press time.

“If a Mizzou fan doesn’t come watch J’den wrestle, shame on them,” says Smith, throwing down the gauntlet. “If you haven’t seen him wrestle, I challenge you to come out, drive three-four hours and come watch him.

Members of the team “bring-it-in” for a ceremonial end to another afternoon practice on the fourth floor of the Hearnes Center.