Robert Greene, filmmaker-in-chief at the Murray Center for Documentary Journalism at the MU School of Journalism, poses for a portrait in his office where a picture of film director Jean Luc Godard serves as a source of inspiration. Greene's film, Kate Plays Christine, will show at the 2016 True False Film Festival. Photo by Shane Epping.

Christine Chubbuck was an accomplished 29-year-old TV reporter when she spoke her last words, on camera, July 15, 1974.

“In keeping with Channel 40’s policy of bringing you the latest in blood and guts, and in living color,” she said as she pulled a revolver from her hand bag. “You are going to see another first — attempted suicide.”

Chubbuck then put the gun to her head and pulled the trigger, killing herself on live TV. The shocked cameraman at the Sarasota, Florida, station instinctively dissolved to black, and the grisly footage mysteriously disappeared for decades. Actress Kate Lyn Sheil embodies a newscaster who killed herself on the air in the film Kate Plays Christine, directed by Mizzou Filmmaker-in-Chief Robert Greene. Greene won an award for the film at the Sundance Film Festival in January. It plays this weekend in Columbia's True/False Film Fest.

Robert Greene, whose official title is filmmaker in chief at MU’s fledgling Jonathan B. Murray Center for Documentary Journalism, first heard of Chubbuck more than 10 years ago. The journalist’s harrowing final days are the subject of Kate Plays Christine, which screens at the True/False Film Fest March 3–6 in Columbia. Greene is the director of the film, which earned him a writing award this January at the Sundance Film Festival.

“I was immediately struck by how horrible and sensational [Chubbuck’s story] was, and the first batch of details you get are insufficient to explain anything,” Greene says. “The nature of the story makes you start to question why you even want to know about the story.”

The film chronicles actress Kate Lyn Sheil, Greene’s longtime friend, as she transforms herself into the troubled Chubbuck and reenacts several episodes in the days leading up to the fateful moment. By blending scenes of Sheil playing Chubbuck with scenes of Sheil “playing” herself, Greene cleverly and unpredictably blurs the lines between nonfiction, fiction and reality. Robert Greene takes a photo at the 2014 Based on a True Story Conference at the University of Missouri where he was joined by Miriam Bale and Eric Hynes in a panel discussion titled "Documentary: Subservience to Journalism?" Photo by Shane Epping.

Greene was recruited in 2014 by Stacey Woelfel, director of the Murray Center, to serve as the in-house filmmaker. The J-School’s famous Missouri Method of learning by doing is a perfect fit for students and Greene, who will continue to make movies while he teaches.

“I have to keep making films — not only for my life, but it’s what makes me valuable,” Greene says. “Stacey is really protective of that for me, which is a dream come true.”

“True/False is about how, on screen, lines are always blurred,” Greene says. “There’s no more objectivity in documentary. It is always a hybrid of true and false. If you’re not using the form of filmmaking to question the tension between reality and fiction that exists in every single film, not just documentary, then you’re wasting the potential of the medium.” 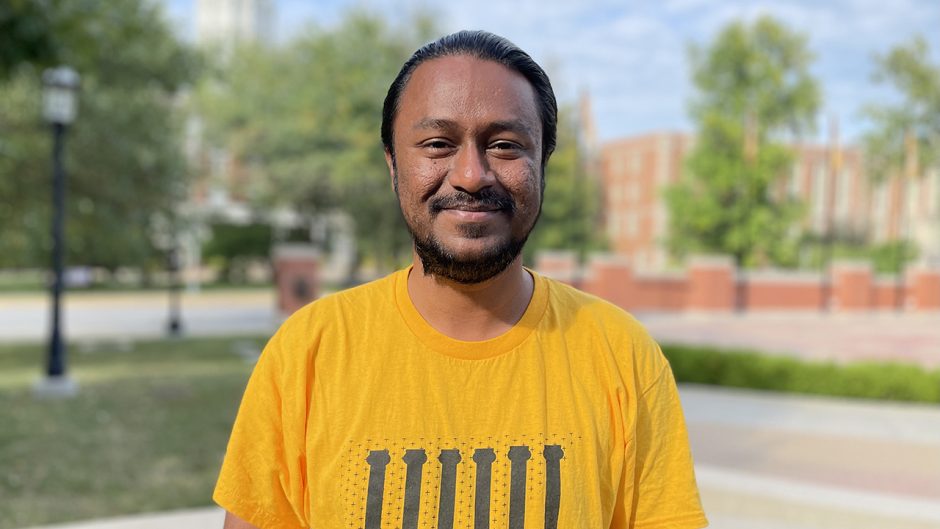