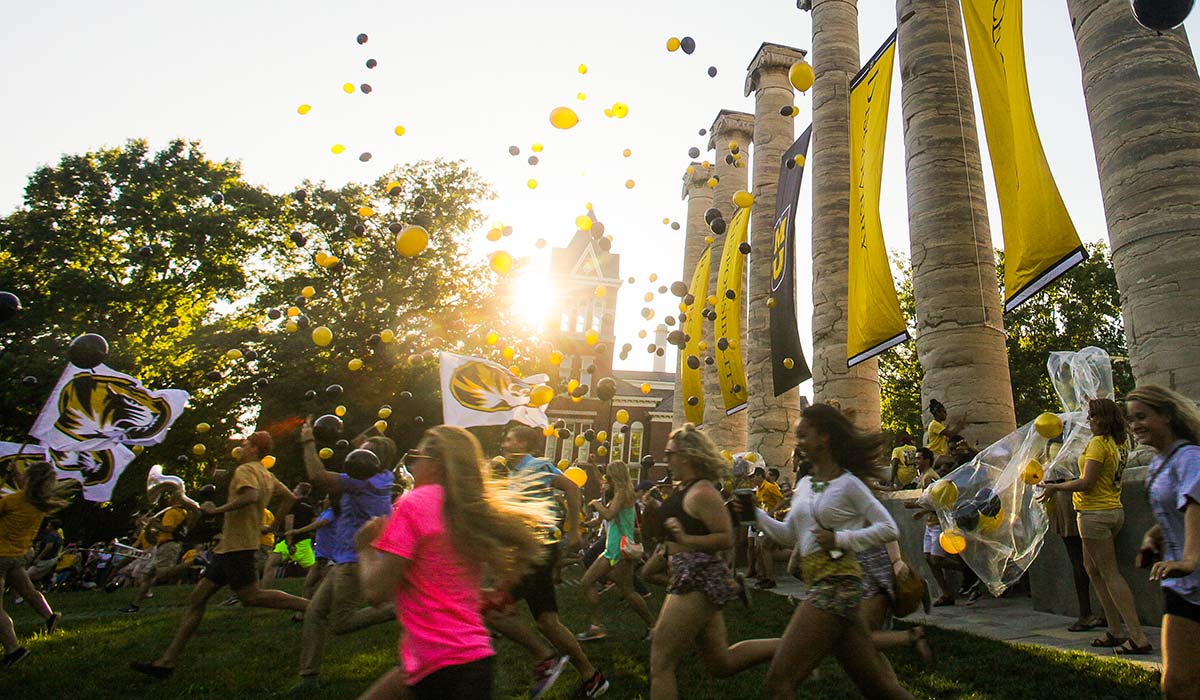 Every August since 1995, Mizzou freshmen have gathered on the Quad before the start of the fall semester to run through the Columns, toward Jesse Hall. The annual happening, Tiger Walk, symbolizes new Tigers' entrance into Mizzou.

For the class of 2019, the Aug. 23 gathering of more than 6,000 students marked the 20th anniversary of the event, which included performances by Marching Mizzou and the Golden Girls and a display of Tigers on the Prowl artwork, as well as mass sampling of Tiger Stripe ice cream.

During the fall 2015-16 academic year, Mizzou welcomes the largest student body and the fourth-largest freshman class in the history of the university. This year Mizzou boasts a record number of high-achieving students (who scored 30 or higher on the ACT), a record retention rate and the most diverse student body in MU’s history. More facts about this year's Tigers » Freshmen race through the Columns toward Jesse Hall during Tiger Walk Aug. 23. Many of the students shot video of themselves passing through, while others took photos of the experience. Photo by Tanzi Propst. The ubiquitous selfie is a standby for Tiger Walk. Photo by Rob Hill. After students passed through the columns on the Quad, some raced to Jesse Hall in a fit of excitement. Many of the freshmen stopped to high-five Chancellor R. Bowen Loftin and take selfies. Photo by Tanzi Propst. Students stop to high-five Chancellor Loftin as they pass through the Columns on their way to Jesse Hall. The chancellor stayed behind the base of the Columns to avoid being mowed down by the stampede of students racing toward Jesse Hall. Photo by Tanzi Propst. Many freshmen had to stop for selfies with Chancellor Loftin before continuing on to receive free Tiger Stripe ice cream after Tiger Walk. After the first wave of students raced through, the pace slowed considerably and gave others more time to spend chatting it up with @bowtieger. Photo by Tanzi Propst. Marching Mizzou warms up before their concert on Francis Quadrangle. Photo by Nic Benner. The Columns reflect in the back of a sousaphone on the Quad during Marching Mizzou's performance of "Sugar" by Maroon 5 Sunday evening. Despite being in the back of the ensemble, the sousaphone players brought their spirit and danced along to all of the songs the band played that evening. Photo by Tanzi Propst. A member of the drumline dances it out during Marching Mizzou's performance on the Quad. The band played a plethora of fan favorites, including “Hey Baby,” “The Eye of the Tiger” and Mizzou’s Alma Mater. Photo by Tanzi Propst. Freshman Jordan Alford and sophomore Madeline Simer pose by a Tigers on the Prowl statue. Photo by Nic Benner. The Mizzou Golden Girls perform in front of Jesse Hall to a crowd of freshmen, parents and other Mizzou students as Marching Mizzou plays fan favorites in the background. This year marks the 50th anniversary of the Golden Girls at Mizzou. Photo by Tanzi Propst. Graduate engineering student Thyinath Panduga, from India, pretends to give a speech from the event lectern. Photo by Nic Benner. Brendan Kloeppel doesn’t pass up the opportunity to get a selfie with Chancellor Loftin before Tiger Walk. The chancellor walked among the freshmen before the festivities began. Photo by Tanzi Propst. A freshman stops to take a selfie with Chancellor Loftin after passing through the Columns during the Tiger Walk. Photo by Tanzi Propst. Artistic tiger statues from the Tigers on the Prowl fundraiser and charity stand on Francis Quadrangle Sunday evening. On Oct. 2, 2015, the tiger statues will be auctioned off at an event hosted by Kim and Melissa Anderson. Photo by Nic Benner. Marching Mizzou's sousaphone players dance, showing off their shimmying moves and getting into the Tiger spirit. Photo by Tanzi Propst. A member of the Marching Mizzou drumline takes a moment to greet Chancellor Loftin as he makes his way around the edge of the ensemble Sunday evening. Photo by Tanzi Propst. The Marching Mizzou drumline teams up with the cymbals near the end of their performance on the Quad. Photo by Tanzi Propst. Students wait in line for a taste of Tiger Stripe ice cream to cool their engines after running across the Quad. Photo by Nic Benner. University of Missouri supporters celebrated the successful conclusion of the "Mizzou: Our Time to Lead" campaign and its record-breaking $1.41 billion total.

UM Board of Curators approves the naming of the Michael A. Middleton Center for Race, Citizenship, and Justice

The center, rooted in interdisciplinary research, will promote diverse research and engagement in critical conversations about race, citizenship and justice.