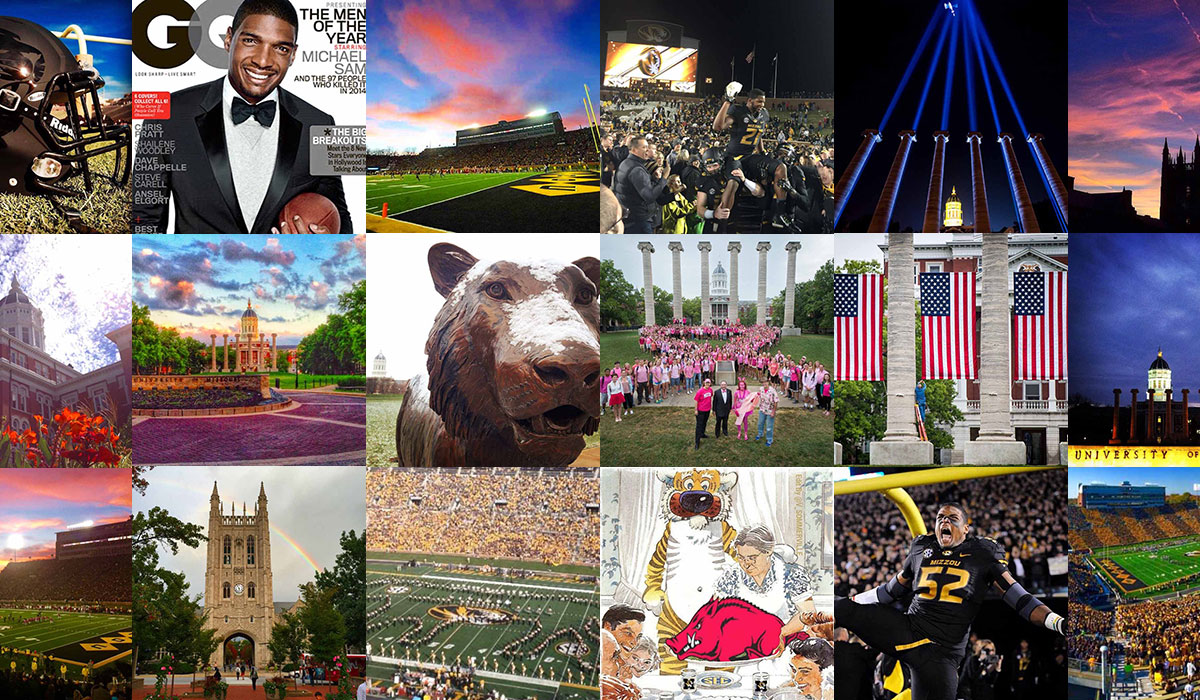 It's Throwback Thursday, and we're looking back on big Mizzou's moments from 2014. Check out the 20 photos fans liked the most on Mizzou Instagram. The bronze tiger on Tiger Plaza gathers a dusting of snow. Photo by Shane Epping. Mizzou alumnus Michael Sam is named one of GQ magazine's men of the year. The sky brightens over Jesse Hall and Francis Quadrangle after a rain storm. Photo by Graham Schuh. Campus Facilities employee Jerry McCowan puts the finishing touches on the flags that hang between the Columns on Patriot Day. Photo by Shane Epping. To commemorate the university's 175th anniversary, Mizzou held a Columns-lighting ceremony, topping off a week of celebratory events. Photo by Shane Epping. Marching Mizzou forms a tiger on Faurot Field during a halftime show. Photo by Ryan Gavin. Offensive lineman Mitch Morse is carried on his teammates' shoulders after the Tigers win the SEC East championship. Photo by Tanzi Propst. The scoreboard at Memorial Stadium announces the Tigers' victory. Photo by Shane Epping. Fans attend a football game clad in black or gold, alternately, coordinated by section, resulting in tiger stripes throughout the stands. Photo by Ryan Gavin. A rainbow brightens campus after rain moves through. Photo by Ryan Gavin. Bud Sasser is carried off the field by his teammates on Senior Day. Photo by Ryan Gavin. Tigers celebrate Thanksgiving on the eve of a big game against the Arkansas Razorbacks. The sun sets over Faurot Field as the Tigers take on the Razorbacks, winning the SEC East championship. Photo by Kristin DeLeon.