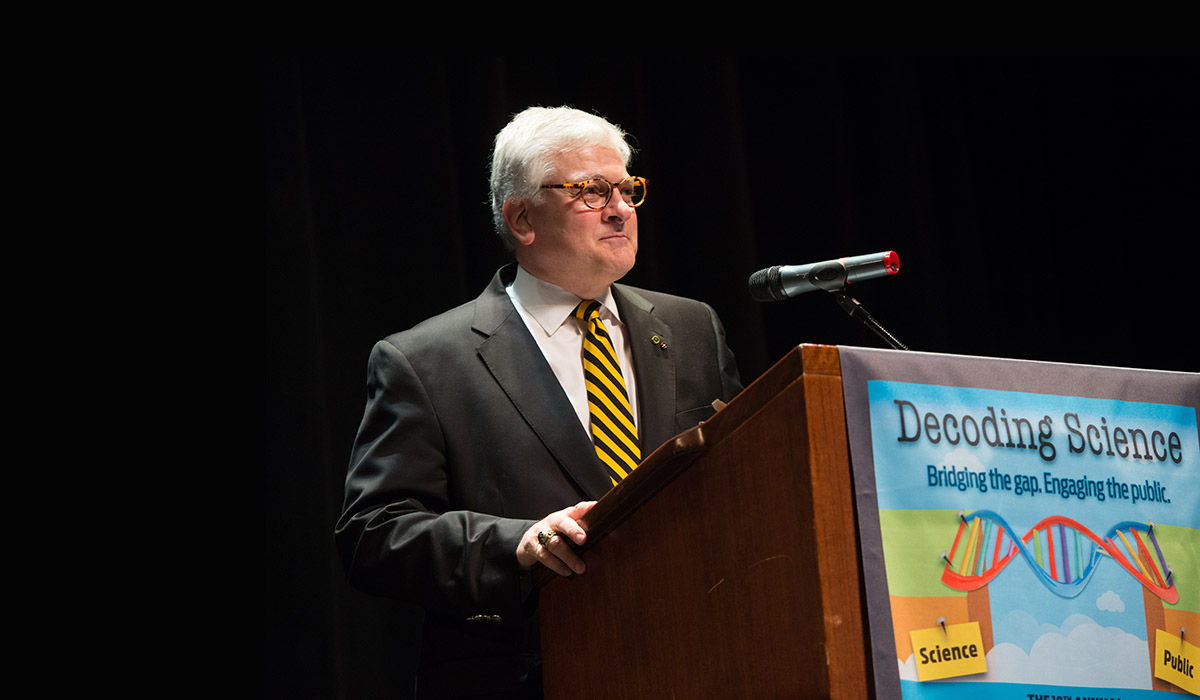 Four Mizzou scientists have been recognized for their innovative work. The American Association for the Advancement of Science (AAAS), a 166-year-old national organization, has named 401 new fellows, all elected by their peers for their scientifically or socially distinguished efforts to advance science and scientific applications. Among them are the University of Missouri's Hank Foley, Silvia Jurisson, Krishna Sharma and Jerry Atwood.

Nanotechnology is the study and engineering of matter and microscopic structures. These tiny systems continue to gain interest for their promise and commercial application.

Mizzou's Henry C. “Hank” Foley is a pioneer in the study of nanoporous carbon, or tiny membranes and systems that allow energy sources to pass through or become stored in these structures. His analysis and scholarship in nanosystems and how they are composed continues to inform research fields of study including medicine, materials processing, energy and the environment.

Foley, senior vice chancellor for research and graduate studies Mizzou, has worked for more than 30 years to advance the study of nanotechnology. He is an inventor with 16 patents that include a plasma reactor that aids in transforming industrial materials into finished products, carbon membranes for small or large molecule separations and new kinds of carbon materials. He has authored more than 120 peer-reviewed articles on topics such as adsorption, a process that is useful in energy storage including hydrogen and natural gas, and nanoporous carbon.

“Our research is important because we were among the first to really tackle nanoporous carbon usefulness and utility,” Foley says. “We knew the importance of this technology early; today hundreds of researchers are continuing this work. Once the National Science Foundation took an interest in our research, the results became much more significant. I’m delighted to see how much the field has grown. A need for deep science still exists as well as tremendous opportunities in developing more efficient energy storage and carbon dioxide abatement.”

“Our nanoporous carbon research will be important in global efforts to decrease carbon emissions and create a healthier environment.”

Foley also serves as executive vice president for academic affairs, research and economic development for the University of Missouri System. He holds numerous memberships in professional and honorary societies, including the American Society for Cybernetics, the Computing Research Association, Sigma Xi, Phi Lambda Upsilon and Sigma Pi Sigma. He was a founding member of the American Institute of Chemical Engineers (AIChE) Catalysis and Reaction Engineering Division and served as its chair. He is a member of the Cosmos Club in Washington, D.C., is a member of the American Association for the Advancement of Science and recently was elected a fellow of the Industrial and Engineering Division of the American Chemical Society as well as a fellow of the National Academy of Inventors.

Foley earned a master’s degree in chemistry from Purdue University and a doctorate in physical and inorganic chemistry from Pennsylvania State University. He served on the University of Delaware chemical engineering faculty for 14 years before returning to Penn State in 2000. In his tenure at Penn State, Foley served as department head, associate vice president for research and director of strategic initiatives, and dean of the College of Information Sciences and Technology. He has extensive industry experience, including working for American Cyanamid and consulting with companies such as Westvaco, Air Products, Monsanto, DuPont and Engelhard Corporation.

Nuclear medicine is the branch of medicine that uses radioactive materials to provide diagnostics and treatments for cancer. Often standard protocols involve using radioactive isotopes developed to image as well as weaken cancer cells in the body.

With more than 30 years of research in radiopharmaceutical chemistry, Silvia Jurisson, a researcher at Mizzou, is a world-renowned scientist who continues to develop breakthrough materials used in the detection and treatment of cancer.

“The most rewarding thing to me is to follow my students through their educational and professional careers.”

More than 10,000 hospitals worldwide use radioisotopes in medicine, and about 90 percent of those procedures are for diagnosis, according to the World Nuclear Association. The most common radioisotope used in diagnosis is technetium-99m. Jurisson, a professor of chemistry and radiology and a research investigator with MU Research Reactor (MURR), has spent decades studying this isotope and other isotopes for their medical usefulness. She is collaborating with medical and veterinary scientists at MU to develop biological targeting mechanisms that help send radiation to cancerous cells and organs.

“By themselves, none of the radioisotopes will go where you want them to in the body,” Jurisson says. “Often cancer cells are in hard-to-reach places — in the nooks and crannies of the body — so we have to look for ways to deliver those radioisotopes specifically where we want them to go. Our lab works on the basic chemistry and methods used to create the radioisotopes working with scientists at (MURR). Then we collaborate with medical scientists on ways to get the isotopes where they can effectively image or kill cancer cells.”

Through collaboration with cancer specialists at MU, Jurisson and her lab have developed a special outer shell or coating for radioisotopes containing a biological targeting moiety that binds with receptors attached to the cancer cell. Once the isotope is injected, the shell causes the isotope to effectively “seek out” and bind with the cancer cell delivering the isotope where it images or kills the cancer.

Jurisson holds a bachelor's in chemistry from the University of Delaware and a doctorate degree in inorganic chemistry from the University of Cincinnati. She was the 2012 recipient of the American Chemical Society’s Glenn T. Seaborg Award in Nuclear Chemistry. She serves as a member of the Board of Directors for the Society of Radiopharmaceutical Science and serves as an associate editor for the publications Radiochimica Acta, Nuclear Medicine and Biology and The Journal of Radioanalytical and Nuclear Chemistry.

Cataracts, a clouding of the lens in the eye leading to vision loss, affects more than 24 million people in the United States, according to National Institutes of Health estimates. Often linked to the natural process of aging, cataracts are a major cause of blindness worldwide.

Krishna Sharma, an ophthalmology researcher at Mizzou, has worked for more than two decades to study the mechanisms involved in this degenerative disease. Discoveries in his lab are advancing both the understanding of how cataracts develop and the process of aging.

The lens of the eye is primarily composed of proteins called crystallins. As we age, these crystallins accumulate and clump together to form cataracts. Sharma’s lab is investigating how that clumping occurs. By analyzing strings of amino acids in the crystallins called peptides, Sharma’s group has narrowed the process that causes these milky clumps to form on the eye. His lab also studies how those same peptides responsible for clumping also act as “chaperones” and help stave off lens degeneration. Further studies to control the development of these clumps could help in delaying age-related cataracts.

“In 2014, the total cost of vision loss and blindness in the U.S. was $145 billion,” says Sharma, professor of ophthalmology in the Mason Eye Institute at MU and joint professor of biochemistry. “Of that, almost half the cost was composed of cataracts care. This rising cost, coupled with the frequency of the disease, helps drive our research. Over the years, we’ve honed in on crystallins involved in degeneration. Through the course of our study, we found that sometimes the very peptides causing the clumping can help keep it at bay. Now we’re studying the ‘switch’ that causes these peptides to be helpful or harmful.”

“We hope to use our information to develop therapies and ways in which we can delay cataract formation.”

Sharma is the author of more than 70 peer-reviewed articles. He is an academic editor for the journal PLoS One and a member of the National Eye Advisory Council. He holds a bachelor's degree in biology and chemistry and master’s and doctoral degrees in biochemistry — all from the University of Mysore in India. He also is a Fellow of Association for Research in Vision and Ophthalmology and a member of the National Advisory Eye Council.

Chemistry is a branch of physical science studying composition, structure and properties of matter. With decades of study and a deep understanding of the field, Jerry Atwood, a researcher at Mizzou, is a prolific chemist who has guided the study of molecules and how they interact in the physical world. His discoveries have led to new ways of developing drugs more efficiently and better fuel storage capabilities. Atwood is considered a founding father in the field of supramolecular chemisty, or what he describes as “chemistry beyond the molecule.”

I can’t think of another chemistry department in the country where three fellows were named at the same time. I am honored to be in the company of these other great chemists here at Mizzou.

Atwood's accomplishments are significant. In 1969, he first discovered liquid clathrates. This work provided major underpinnings for what is now called “green” or “environmentally friendly” chemistry. In 1997, he discovered a way to make nanocapsules, which may eventually lead to better delivery methods for chemotherapy in cancer patients. In 2002, Atwood discovered materials useful for storing hydrogen and methane. This created the potential for storing alternative fuels.

To develop basic drugs that are safe for human consumption, manufacturers must have knowledge of the chemistry involved to create specific crystals that constitute the eventual compound. Current drug development methods may include high-temperature heating, raw material altering, washing, filtering, and intensive drying. Atwood’s team found that pressurizing carbon dioxide can bring about the desired crystallization easier and at normal room temperatures. The discovery has the potential to streamline work flow and provide more safety for those who work with these chemicals.

“Our lab pioneered the study of supramolecular chemistry, which is focused on molecular biology and medicine,” says Atwood, Curators Professor of Chemistry and chair of the Department of Chemistry in the College of Arts and Science at MU. “It refers to the way molecules react with other molecules and is aimed at trying to understand life processes: the way we think, the way we interact with the physical world, and what the molecules have to be doing for these processes to occur.”

As a pioneer in supramolecular chemistry, Atwood has authored 11 volumes focused on the field as well as an encyclopedia and textbook. He has authored more than 700 peer-reviewed articles in his career, and his work has been cited more than 36,000 times.

The h-index ranks researchers based on their total number of published articles and the number of times those articles are cited in other people’s publications. An h value of 20 is a sign of success and one of 40 indicates an outstanding scientist likely to be found only at a major research laboratory. Atwood’s h value is 91.

Atwood holds a bachelor's degree from the Southwest Missouri State University and a doctorate from the University of Illinois. He has received numerous awards over his distinguished career, including: Curators Professor, MU 1999; President’s Award for Research and Creativity, MU 2000; Izatt-Christensen International Macrocyclic Chemistry Award, 2000; Polish Academy of Science, Elected Foreign Member 2000; Alumni-Faculty Award, MU 2002;  Royal Society of Chemistry, Elected Fellow, 2005; Honorary Medal of the Institute of Physical Chemistry, Polish Academy of Sciences, 2005; Midwest Chemistry Award, American Chemical Society, 2005; Distinguished Faculty Alumni Award, MU 2010; Supramolecular Chemistry Award, Royal Society of Chemistry, 2012; Honorary Doctorate in Science, University of South Florida, 2013; and the International Award, Materials Engineering for Resources, Society of Materials Engineering in Japan 2013. Atwood has also been instrumental in reviewing and publishing many scientific papers. He has served as co-editor in chief of the New Journal of Chemistry; associate editor of Chemical Communications; editor of the Journal of Supramolecular Chemistry; editor of Supramolecular Chemistry; consulting editor and editor of the Journal of Chemical Crystallography; and editor of the Journal of Inclusion Phenomena.