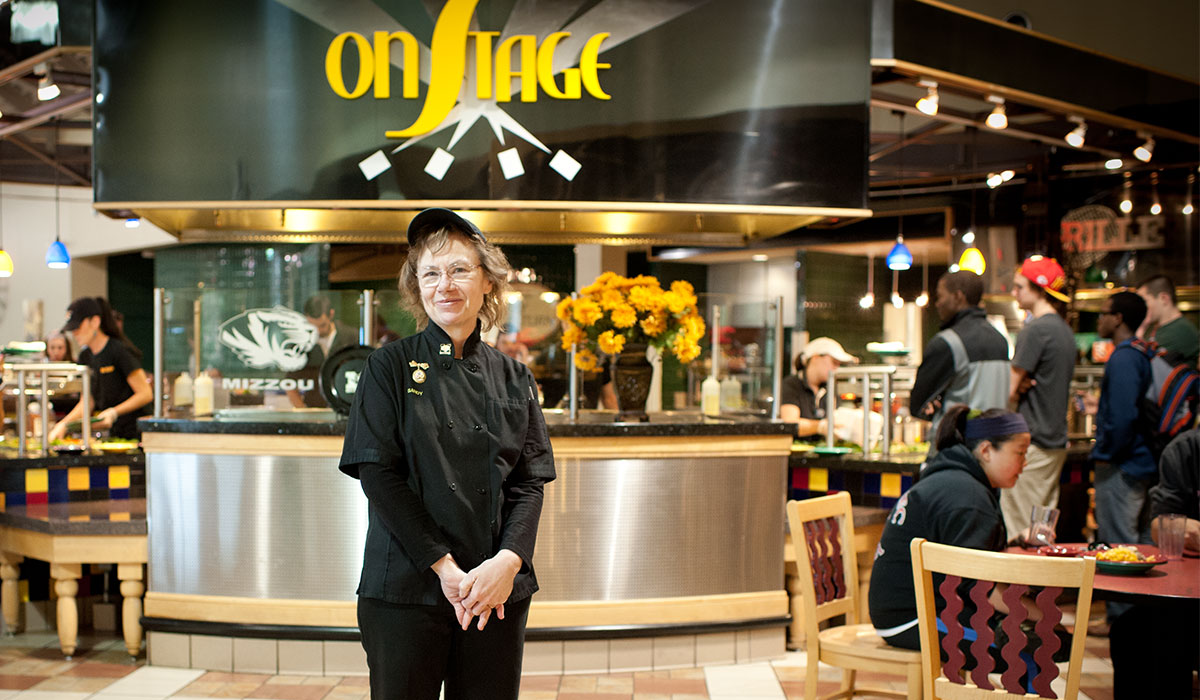 Story by Ryan Gavin
Photos by Shane Epping
Published: May 21, 2013 Sandy Cunningham greets students as they enter the dining hall, remembering facts and stories about hundreds of students every semester.

The woman with the radiant smile and even brighter demeanor becomes a bigger Mizzou celebrity with each ID card she swipes at Plaza 900 dining hall.

There’s nothing unusual about her appearance: curly brown hair protruding from a black Mizzou hat, sparkling eyes behind glasses, a friendly face creased with years of smiles. Many students, when asked to describe her, say she reminds them of their moms or grandmas. And that’s exactly why Sandy Cunningham, a mother of three and grandmother of four, came to Mizzou — to bring a touch of home to students while they’re away from theirs.

“The kids are always what has kept me here because I remembered how my kids felt,” says Cunningham, whose daughter struggled with homesickness as a college student. “It never dawned on me how important it was to have people and things that remind you of your home.”

Cunningham is so beloved by students that they’ve created a Facebook page in her honor. Started less than two years ago, Sandy of Plaza 900 now has more than 2,500 likes. But Cunningham doesn’t have a computer to see what kind words students write about her. She learned about it from her son.

“I don’t get into a lot of those technology things, but I remember giving the person who started it a piece of paper thanking everyone,” Cunningham says. “I didn’t know how to get on the page to thank them, but I know it was something that was important to kids.”

Cunningham was the eldest of 11 children in her family and helped her mother take care of her six brothers and four sisters in Des Moines, Iowa. She earned a degree in special education from what is now Truman State in Kirksville, Mo., and decided to focus on helping kids, with increasing needs for specialization in the education field. Known to be a joker on occasion, Cunningham likes to make everyone she comes in contact with feel at ease and at home.

Outside of work, Cunningham enjoys spending time with her husband, Wes, playing with their four grandchildren, attending church activities and reading when there's some quiet time. She also loves watching the Cardinals play but says she's happy to root for any team.

"My son played ball growing up, so I became a pretty big fan of baseball. But when he stopped, I didn't have anybody else to watch," Cunningham says. "Every time one of the kids [at Plaza] says something about a different team, I feel like telling them that if I watched their team, I have a feeling I'd probably be a fan of them, too."

Whether chatting about baseball or discussing any other interest, Cunningham has a simple goal when interacting with students: to make everyone feel comfortable in college. While students make a difficult transition, she takes pride in knowing she's made someone's day better or put another parent's mind at ease.

"I like to tell my kids that life is an adventure. Every day is," Cunningham says. "If it’s not a wonderful one at the moment, it will be soon."