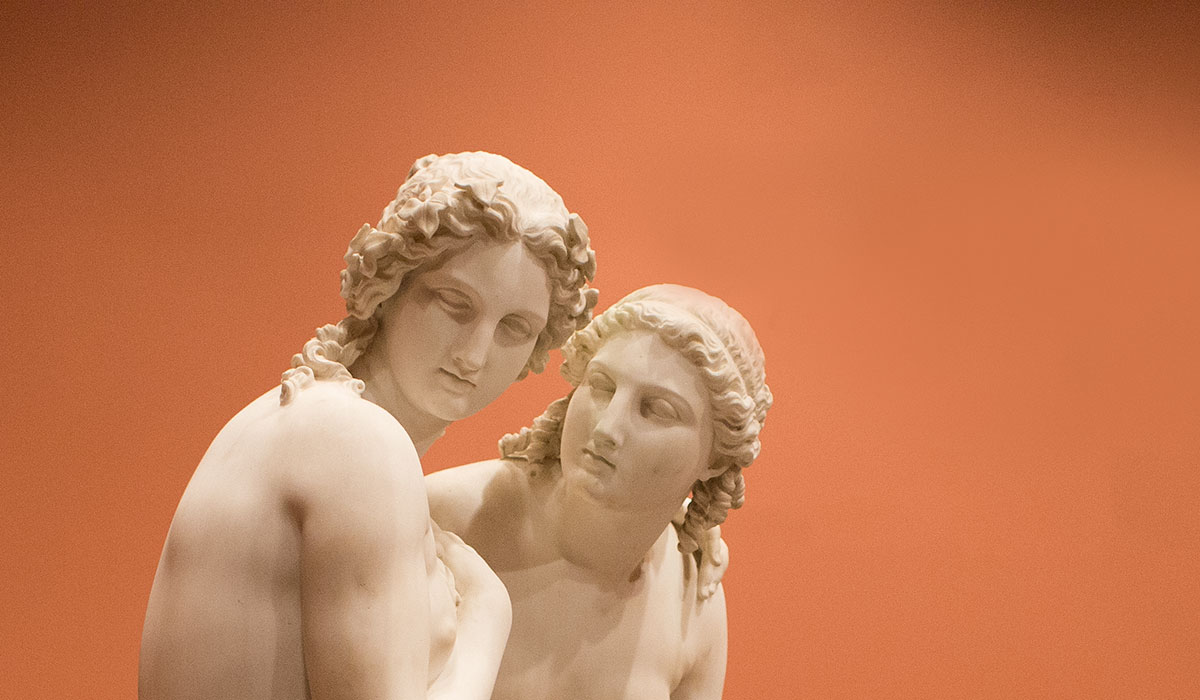 MU’s two distinguished museums will move temporarily to Mizzou North in 2014, establishing a museum megaplex in the former Ellis Fischel Building. The Museum of Art and Archaeology is vacating Pickard Hall for extensive testing of radiation levels, the result of experiments conducted when the facility was a chemistry building. The Museum of Anthropology is leaving Swallow Hall to accommodate the building’s renovation as part of Renew Mizzou.

In addition to the two museums, Mizzou North will house their expanded gift shops; the Museum Support Center, an expansive storage space for artifacts; and the 1896-founded Dunn-Palmer Herbarium, the repository for tens of thousands of plant specimens.

Can you imagine the scope of such a move? The process goes far beyond filling boxes with newspaper-wrapped treasures.

The Museum of Art and Archaeology has the third-largest visual-arts collection in the state — more than 15,000 individually catalogued objects, plus several thousand items from controlled-archaeological excavations.

The Saul and Gladys Weinberg Gallery of Ancient Art

Robert and Maria Barton Gallery of Modern and Contemporary Art

Shadow of 'Joy of the Waters,' a bronze sculpture (ca. 1917) by American artist Harriet Frishmuth

Gallery of European and American Art

Image and Imagination in African Art

The Museum of Anthropology is the largest anthropology museum in the Midwest and has the largest holding of prehistoric Missouri artifacts in the world. The archaeological collection includes millions of items dating from 9,000 B.C. to modern times. Many of the objects, such as American Indian arrowheads and pottery pieces, are stored at the Support Center.

Chipped-stone tools were produced by all native groups living in Missouri. Two different flaking techniques - percussion flaking and pressure flaking - were employed to shape chert and other stone into weapons and tools.

Kachina doll, a spirit being that acts as an intermediary between humans and the sacred realm among Pueblo groups.

Clothing and other waterproof containers made from seal and walrus intestine were used throughout the Arctic. Ceremony and ritual assumed important roles in the belief systems of northern hunting peoples such as the Inuit.

The Grayson Collection of ancient and modern archery equipment from around the world. Only a tiny fraction can be exhibited at one time.

A Missouri cabin, 19th century life. When settlers first moved from Tennessee and Kentucky to northeast Missouri in the early 1820s, their first dwellings were log cabins. This cabin, based on archaeological and historical data compiled by the Cannon Reservoir project, is typical of those structures.

Shoes from the Pattrick Collection, a family from the Macon, Mo., area.

This exhibit is a representation of a working excavation. The mural in the background is an artist's conception of what this site may have looked like at around AD 250.

Visitors leave glowing comments about The Museum of Anthropology.

The University of Missouri began accepting gifts of ethnographic materials as early as 1885, and that’s a lot of collecting. In fact, the holdings of MU’s two museums are so large that only a small fraction of the art and artifacts can be displayed at one time.

A mall of museums

A trip to Mizzou North, two miles from campus, will add about eight minutes of driving time for faculty and students. As academic museums, MU’s collections support teaching and research, but they have another important service as well: public enjoyment and education.

For public use, the Mizzou North location offers easier driving access and more parking, a benefit particularly for the school buses that regularly transport children from area schools. City buses serve the location as well.

With a spot visible from Interstate 70, the museum complex could become a tourism draw for the city, says Dean of Arts and Science Michael O’Brien, who will lead the move for the Museum of Anthropology, of which he serves as director.

Among nearly 17,000 museums in the U.S., the Museum of Art and Archaeology is one of about 700 accredited by the American Association of Museums; its collections represent art and artifacts spanning six continents and more than seven millennia.

Museum director Alex Barker is leading the relocation of those objects with the help of staff members.

Jeffrey Wilcox, museum curator of collections and registrar, has responsibility for the actual move of the collections, which he calls a “huge undertaking and on a very short time schedule.”

All loaned pieces must be returned, and storage rooms with thousands of artifacts must be emptied. Working with others, Wilcox will develop protocols for the packing, transportation, storage, unpacking and reinstallation of the objects.

“Tracking location changes will be critical. We can’t have anything going missing during the process, and we will make sure that nothing suffers any damage either,” Wilcox says.

Wilcox and his team, including staff from Campus Planning and Design and from Campus Facilities and Procurement, will engage the help of specialized fine-art moving companies to help pack and move the collections.

At Mizzou North, the work will revolve around preparing the former medical facility, previously used as operating and exam rooms, to hold the museum collections. Barbara Smith, museum chief exhibition preparator, will guide those activities.

The planning skills Smith developed while overseeing exhibit installations will be tested in the upcoming move.

She’ll work with Campus Facilities on specifics such as sheathing the gallery walls with plywood beneath the sheet rock to safely attach artwork. She’ll consider removing or constructing walls as needed, installing track lighting and a suitable flooring material. She’ll oversee the removal of drop ceilings and water pipes, which could pose a risk to the collections. And she’ll seek vendors who can supply display cases and storage cabinets.

During the move, the two museums’ gallery space will be closed for some time and unavailable for school or class tours and other educational activities. Both museums, however, will continue to offer viewing of their collections through online displays.

The Museum of Anthropology’s website lists numerous links to collections, such as the Grayson Archery Collection, the Bowser ivories, the Eichenberger casts of some of the most important archaeological items from North America and many others.

The Museum of Art and Archaeology is designing Web-based exhibitions as adaptations of previous physical exhibitions and developing other Web displays specifically for online visits.

“Outreach is going to be a vital part of the museum’s mission in the coming months,” says Rachel Navarro, assistant educator at the art and archaeology museum.

Navarro is exploring methods to make the collections accessible to students at all levels and the public at large. For public input, she’s recruiting members of an education council to serve as a think tank. Her first goal is to develop a curriculum for area schools that focuses on museum objects and meets Missouri’s common core standards for education at various grade levels.

Navarro also will teach an Honors College course in the fall that encourages MU students to create multimedia projects based on museum objects. The projects will be integrated into a smart-phone app for the museum as another way of making art available when the gallery doors are closed.

The date those doors will reopen will be announced at a later date.

It’s a huge move, but the upgrades are considered essential for both buildings, particularly Pickard Hall, which needs remediation for radioactive materials resulting from experiments when the facility was a chemistry building. Safety of the museum occupants is top priority.

Treasures of the Museum of Art and Archaeology

The Museum of Art and Archaeology offers a taste of ancient and modern culture through its art and artifacts, with these collections among the top five:

The Weinberg Gallery of Ancient Art — described as one of the 10 best of its kind in the nation — includes pieces from Egyptian and Mesopotamian art and late Roman works. Book-length volumes have been written describing the collection of Greek vases and Palestinian and Cypriot antiquities.

The MU Cast Gallery displays a collection of 19th-century casts made from original statues of antiquity found in the world’s greatest museums. These superb plaster replicas of Greek and Roman figures — amassed from 1895 to 1902 by John Pickard — have been the subjects of figure drawings by generations of MU art students.

The Samuel  H. Kress Study Collection, a gift of 14 masterworks from the Kress Foundation in 1961, helped transform MU’s rather distinguished study collection of ancient art to a full-fledged art museum. Most of the collection focuses on Renaissance and Baroque works from Italy.

The Modern and Contemporary Galleries showcase works by leading artists, including Andy Warhol and Pablo Picasso. Visitors experience a great variety of iconic art, such as Thomas Hart Benton’s Musician (painted in 1949) and works by the 21st-century street artist Cyclops.

Museum curators periodically change the permanent galleries to showcase works by Breughel and Renoir and prints by artists such as Manet, Cassatt, Delacroix and Whistler.

Treasures of the Museum of Anthropology

The Museum of Anthropology’s permanent exhibits focus on American Indian cultures. Rotating exhibits cover all fields of anthropology and archaeology. Curators rank these collections among the top five:

The Grayson Collection of ancient and modern archery equipment from around the world is, without doubt, the museum’s most-respected exhibit. Only a tiny fraction of the thousands of pieces can be exhibited at one time.

The Sutton Collection includes weaponry such as spears, knives, shields and swords and other materials collected from Africa in the 20th century. Other items include garments, ornaments, musical instruments, basketry, vessels, tools and masks.

The Eva Bowser Collection of carved Japanese ivories, many of which pertain to archery, is described as exquisite. The ivory carvings and other Asian decorative arts date from the 18th to the 20th centuries and offer a glimpse of Japanese habits and customs.

The Pattrick Collection consists of a wide range of household items dating from 1810-30.The hundreds of household goods, clothing, children’s toys and games, books and photographs chronicle the daily activities of the Pattrick family from the Macon, Mo., area.